The unseen labour of racialized faculty

Across the university, racialized faculty dedicate a huge amount of time, energy and passion to helping students of colour or bridging divides within the academy.
Written by
Zak Vescera 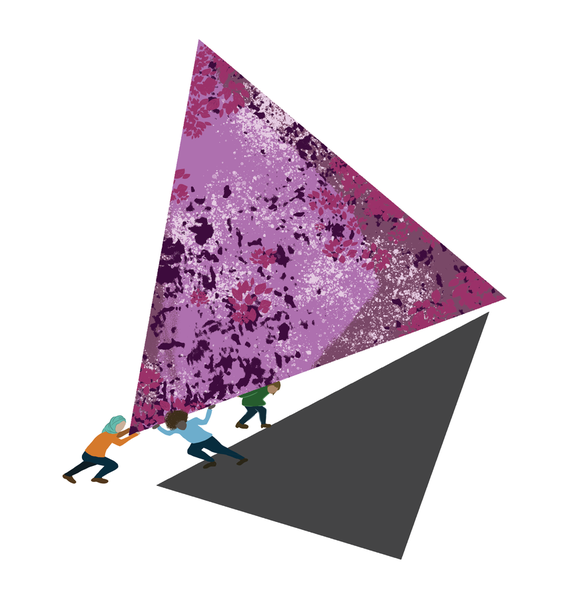 The tissue box on Benjamin Cheung’s desk is empty, even though he has never used one.

“The usage rate hasn’t been too, too long,” he said, pointing at the large, empty cardboard shell perched on the corner of his desk. It’s exam season, and Cheung’s desk is covered in papers from the roughly 1,000 students he teaches each year. He offers three office hours a day.

He spends many of those hours listening to and helping students in distress. Students who feel there’s no one else they can speak to. Students for whom Cheung, who is of Chinese descent, is the first instructor they’ve ever had at UBC who looks like them. Students who need advice, a sympathetic ear, a trusted source of advice or just a good place to cry.

Across the university, racialized faculty dedicate a huge amount of time, energy and passion to helping students of colour or bridging divides within the academy.

It’s called emotional labour, but it’s very much a physical act. It demands time and it takes a toll.

Dr. Renisa Mawani is a professor in the department of sociology. She says students of colour often ask her for help navigating experiences of racism in the classroom, for advice or to help as a mentor. Many new racialized faculty ask for similar support.

“In many respects, they are ethical demands,” said Mawani.

Times Higher Education declared UBC to be the most international university in North America in 2017, but Canadian academics are still mostly white. A 2018 study from the Canadian Association of University Teachers (CAUT) found that only 21 per cent of professors were racialized and many groups — especially Black faculty and Indigenous peoples — were severely underrepresented compared to the Canadian population.

This means that when faculty of colour are hired, they’re often sought by students with similar backgrounds who feel that other faculty either won’t identify with them or who simply won’t support them.

“I often get asked to do things for students that I don’t necessarily know very well or may not have taught in my classes. ... And I feel that if I don’t do it, who’s going to do it?”

Every professor dedicates time to their students. But students of colour face diverse challenges of discrimination or alienation in the university, and that’s something faculty of colour are uniquely equipped to help with.

Dr. Phanuel Antwi, a professor in the department of English, says that students from entirely different faculties often come speak to him.

“I speak to students from engineering who just have heard of me and see me around, so all of a sudden seek me out. This is not my faculty that I teach in, but I’ve met students in engineering, forestry, who just go, ‘Oh, you’re a Black faculty here.’ Okay. Let’s talk,” he said.

Cheung, a vocal advocate for mental health support on campus, is sought out by students of all backgrounds, but says he notices a trend of Chinese and Southeast Asian students speaking to him about cultural-specific problems.

“I’ve had students who will speak to me specifically because of a perceived match in cultural background,” said Cheung. “They’re seeking me because of things that they think I’ve also experienced and in most cases, it’s true.”

“I think that mental health somehow affects pretty much everyone at UBC,” said Antwi. “But I’m curious, I’ve noticed that faculty of colour seem to be the ones who are talking about it the most.”

But for many racialized faculty, it’s a tangible part of their workday — one that takes up hours of time and often impacts their personal well-being.

Cheung says he’s more than happy to be supporting his students, but acknowledges supporting so many of them takes a toll on him.

“I’ve had a lot of students who will talk about having engaged in self harm, who have had serious thoughts about suicide,” said Cheung. “All of that wears on you.”

Mawani describes it as a constant reality of the job.

“The university doesn't credit faculty with providing emotional labour to students” said Mawani. “But Indigenous students and students of colour often feel alienated, and racialized and Indigenous faculty are taxed with the responsibility of providing that labour."

The university is pursuing diversification and reconciliation, but its racialized faculty often bear a lot of that labour. Indigenous professors in particular report being constantly sought out to serve on committees and working groups related to Indigenous research.

“The targeted recruitment of racialized professors to fill spots on committees actually produces conditions in which racialized faculty members bear the responsibility of providing emotional labour for students and other junior faculty without any recognition of that labour,” said Mawani.

This isn’t just to support racialized students, either. Antwi pointed out that the subject matter he teaches, which engages directly with colonialism, often forces white students to confront aspects of their own identities in the classroom.

“And that is a labor that’s very difficult to account,” said Antwi.

“I’m the first person, the first Black prof many are encountering. ... My mere presence in the classroom is a pedagogical experience.”

— Dr. Phanuel Antwi, professor in the department of English

Emotional labour isn’t a uniform task. Scholars interviewed for this piece were quick to point out that expectations and prejudice around one group of faculty are likely different than those around others.

“The kind of demands put on Black faculty, the few of us that are here, are also different than those that are put on, say, South Asians,” explained Antwi.

The CAUT’s 2018 study found that many of those faculty were under-compensated compared to their white colleagues.

But that doesn’t mean that those concerns are competing. More than often, they overlap. In April 2018, Dr. Ayesha Chaudhry organized a round-table discussion with the support of the Peter Wall Institute on emotional labour where Mawani says many faculty realized that they all faced similar challenges.

"We should be paying attention to the subtle nuances and we know that racism manifests itself in very different ways,” said Mawani. “But I also think that this is a larger problem that is shared across faculty of colour and Indigenous faculty in the university.”

Since she was hired 15 years ago, Mawani says she’s noticed many positive changes in the university but cautioned that many of them are only on the surface.

UBC has made recruiting more Indigenous students and faculty a priority, as per its enrolment reports and work in the Board of Governor’s Indigenous Engagement Committee. But where it falls behind is supporting those faculty once they arrive.

Antwi addresses this phenomenon in a reflection entitled On Labor, Embodiment, and Debt in the Academy, where he describes the “energy” of faculty of colour being repurposed to make the university more diverse. In other words, professors are instrumentalized to do what the university has already promised to do.

“The university is this beautiful machine of capitalism,” said Antwi. “... [It] can consume anything that is meant to actually make us survive here, it ends up turning it into its own.”

In other words, racialized faculty are often recruited as part of an effort to change the academy. But once they arrive, they’re the ones who have to lead that change.

That job, which takes the form of emotional labour on top of countless research and working hours, can tire faculty out quickly.

“We’re realizing it’s not just about hiring more racialized and ndigenous faculty and recruiting more Indigenous students, although that’s part of making the university more equitable,” said Mawani. “There needs to be an infrastructure so that these newly recruited faculty can thrive.”

That’s not to say that racialized faculty dislike their jobs or are unhappy to be at the university. Many have managed to thrive at the school, largely because of one another.

“Over my years at UBC, I've been fortunate enough to receive support from networks of racialized faculty and graduate students of colour who have been drawn to each other — not only out of shared intellectual interests— but also out of shared ethical and political concerns about the university,” said Mawani.

Instead, scholars say that the university should consider emotional labour as an active contribution of racialized faculty. And if possible, UBC should try to bear more of it.

Until that happens, faculty worry the work of supporting vulnerable students falls almost exclusively to them.

“There have been times when a student comes into my office,” said Cheung. “And at the end, the student has used up a lot of tissue paper and leaves the room. And I have to sort out my own emotions because it can be difficult for me as well. And there’s a lineup of students outside the door, and they’re all waiting to speak to me.”

A previous version of the article was an older draft that did not match the printed version, specifically some quotes from Dr. Renisa Mawani. It has now been updated. The Ubyssey apologizes for this error.