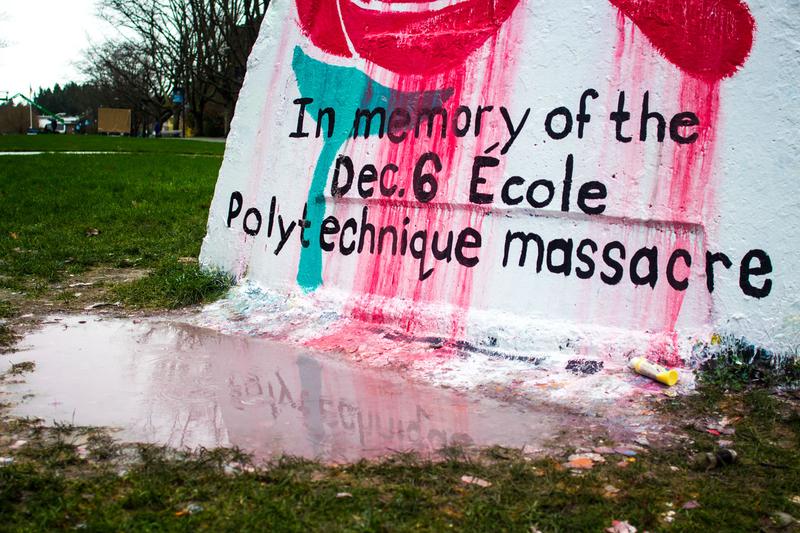 The engineering cairn painted with a rose to remember the 14 female students killed at École Polytechnique in December, 1989.

A group of around 50 people gathered today in the Engineering Design Centre courtyard for the 14 Not Forgotten memorial ceremony.

The event, hosted by Women in Engineering UBC and the Engineering Undergraduate Society (EUS), commemorated those who died in the l’École Polytechnique massacre. On December 6, 1989, an armed man walked into an engineering class at l’École Polytechnique de Montréal, and after stating that he hated feminists, began shooting women in class, killing 14 and injuring 10 others. Canada later established December 6 as the National Day of Remembrance and Action on Violence against Women.

“These 14 were among a select few women who, in 1989, had decided to pursue engineering or nursing. And they were condemned because they were different. They were attacked because one man believed they didn’t belong,” said Veronica Knott, former president of the EUS and a current student representative on the BoG, in a speech during the memorial.

During the ceremony, 14 white roses were laid on the December 6 memorial located in the courtyard, one for each of the female students killed in the attack. There was a minute of silence, followed by a reception to reflect on and discuss the impact of gender-based violence on the UBC community.

Many at the event emphasized that December 6, while meaningful to many students, has a special significance to women in engineering.

“We’re reminded every single day that we’re a minority in engineering, and it’s getting better for sure … [but] it’s important to remember our history and the hurdles in engineering that women had to get past.”

Women in Engineering UBC will be holding a candlelight vigil in memory of the 14 women whose lives were lost, tonight at 5 p.m. in the EDC courtyard.