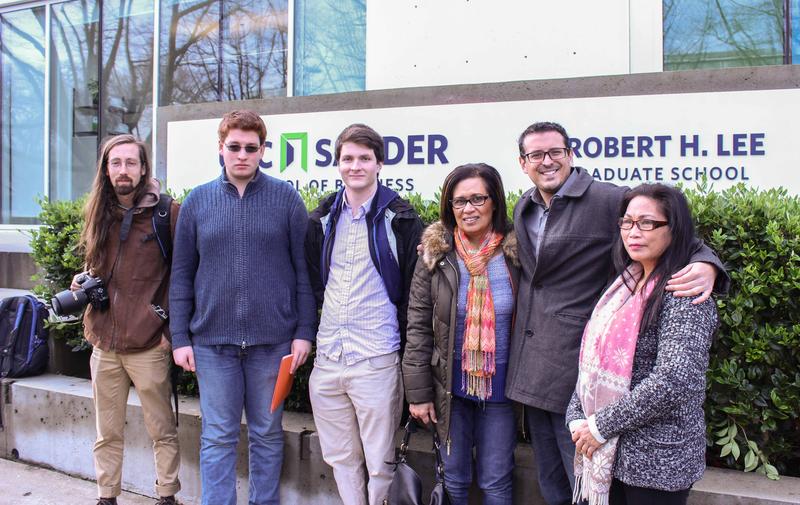 Students and workers gathered at Sauder School of Business yesterday to deliver the petition.

Over 200 students have signed a petition asking UBC to cut ties with Amin Lalji, who sits on the board of directors for the Centre of Social Innovation and Impact Investing.

The Lalji family was a founding donor for the centre, of which its goal is to incubate viable solutions through applied research to the social and environmental challenges facing the world.

According to Larco Hospitality workers, Lalji has failed to pay workers in the Sheraton Vancouver Airport hotel a living wage, despite significant growth in the company as a whole.

“We’re talking to all sorts of community groups and organizations like the Sauder School of Business because we think that the Lalji family and Larco should not be able to whitewash their disrespect to workers because of a few donations,” said Matthew De Marchi, who works for the union representing Larco hospitality workers.

The Social Justice Centre, one of the AMS's resource groups, was one of the organizations approached by workers at the Sheraton Vancouver Airport hotel and their union, and they spearheaded the petition.

“We think that these companies that are mistreating their workers should not be able to use the university as a way to improve their reputation,” said Eviatar Bach, an undergraduate student in the faculty of science who has been involved with the Social Justice Centre for three years.

“I do not want to be associated with a man who does not treat his workers with respect and humanity,” said Rowan van Wersch, a graduate student who is also involved with the Social Justice Centre.

The university has declined to comment on the petition.

A previous version of this article incorrectly stated that Matthew De Marchi works for Larco hospitality, when in fact he works for the union. The Ubyssey regrets this error.