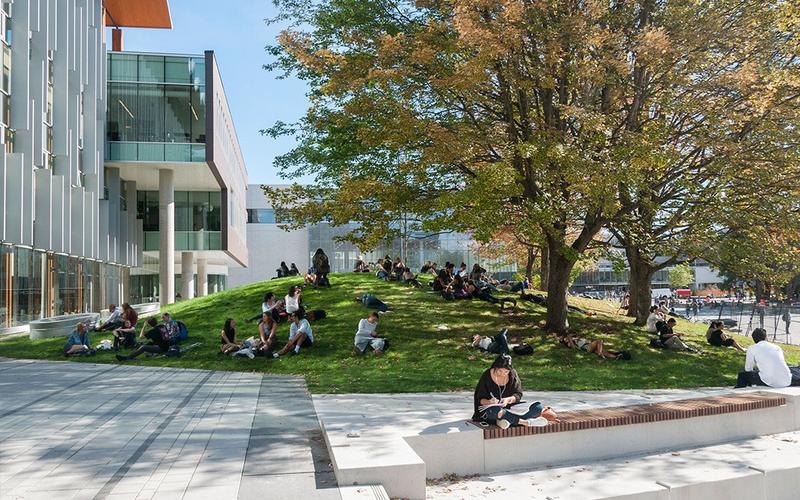 Each year the AMS commissions Insights West, a market research and polling company, to conduct a survey of students about their experience at UBC. The final 2016 survey report will be released by the AMS sometime in the next few days, but here is an advance copy. This article breaks down the issues that the 1,564 students who responded to the survey — and make up about 2.6 per cent of UBC's overall enrollment — indicated to be the most concerning.

The number of survey respondents is down from last year's 2,855 respondents. According to VP Academic Samantha So, the drop was mostly due to timing and the lack of prizes available to those who completed it.

"This year we overlapped with UBC’s Undergraduate Experience Survey more so than in previous years. The AMS also did more student surveying prior to the Academic Experience Survey this year than any other year — overall, we had more than 5,000 responses across our surveys," said So in a written statement.

One quarter of respondents were under the age of 20. That shoots up to 58 per cent for the 20-25 age bracket, with 25-30 coming in at 11 per cent and people older than 30 making up six per cent of respondents. 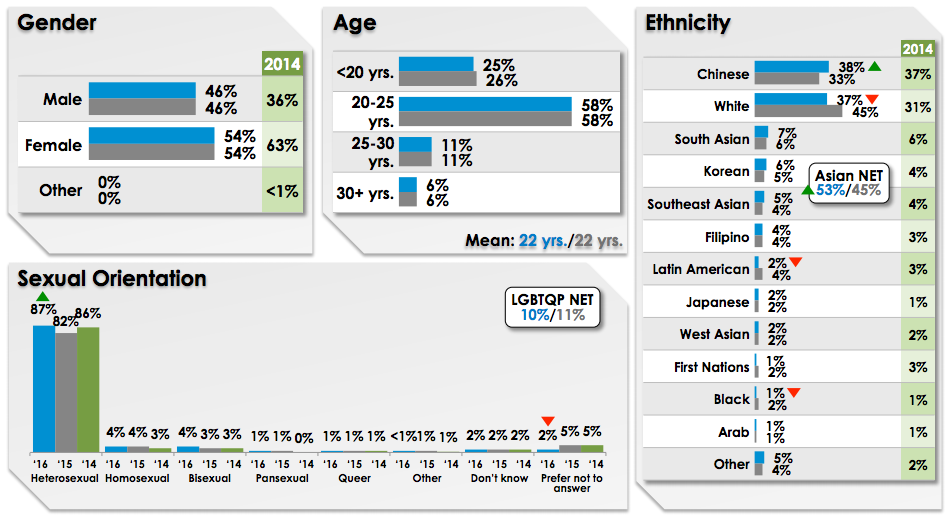 Women made up 54 per cent of the respondents. Men made up the other 46 per cent, and the "other" category was less than one percentage point.

How do students feel about the AMS?

Confidence in the AMS is up from last year in terms of how much students trust them to spend their money wisely. The AMS also faces challenges in informing students of what exactly they do — that said, students have a lot of ideas about how they could improve.

One third of students — up four points from 29 per cent last year — think they're well-informed about what the AMS does, compared to 38 per cent who disagree.

Students also agreed at a higher percentage than last year that the AMS does a good job of representing students’ financial interests to the administration and faculty. The survey also indicated that one third of students trust the AMS to spend their money wisely — an increase of 10 points since 2014. Something, the report notes, might be indicative of AMS efforts to combat recent tuition increases .

"We’re always happy to see that confidence in the AMS is increasing – it shows that we are doing something right. Communication is key. Students who responded that they understood the AMS were much more likely to indicate that they trust the AMS," said So in a written statement.

Answers were scattered when students were asked how the AMS could improve, but responses like better communication (12 per cent) and involvement (10 per cent), increased transparency (nine per cent) and fighting for lower tuition (10 per cent) seemed to resonate with students. 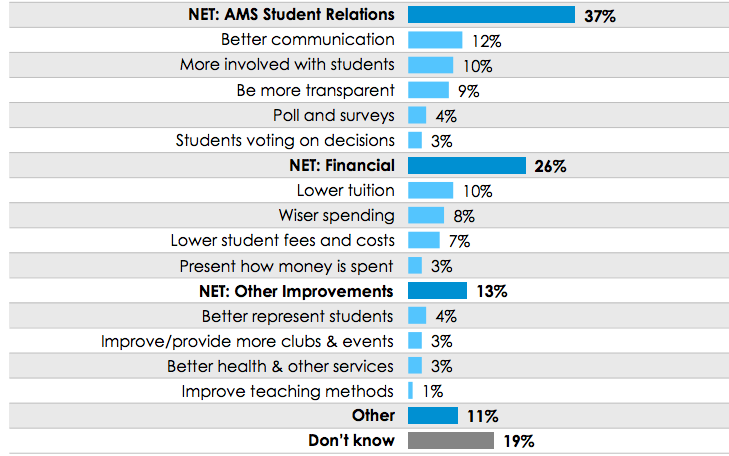 How could the AMS better represent students? Via Insights West

So notes that some of the suggestions are things that the AMS already does, which points mainly to an issue of communication.

"We’re expanding our communications plan for the year — we’re adding more campaigns, broader reach for our social media channels and more opportunities for students to provide us with feedback," she said.

So noted that students can attend Council meetings and executive office hours if they wish to be more informed.

While 70 per cent of students feel satisfied with their university experience overall, the survey points to a number of areas of student concern, such as:

While 49 per cent of students feel they're getting good value for their tuition, just one in five agree that UBC actually cares what they think about rising cost of education.

Estimated expenses on textbooks and other course materials. Via Insights West

Ninety-four per cent of students have bought a textbook or other course resources and never or rarely used them. Sixty-three per cent have resorted to accessing course materials illegally. Just 31 per cent agree that professors take into account cost to students when assigning textbooks.

Just over half of students feel safe on campus at night (56 per cent). The survey has previously highlighted concerns with student safety, especially in times of highly publicized strings of sexual assaults.

Fifty-seven per cent of students have personally experienced discrimination on campus — 10 per cent are discriminated against frequently.

41 to 51 per cent of people in an ethnic minority group have experienced discrimination. Unsurprisingly, they're significantly less likely to feel a sense of belonging at UBC (47-55 per cent, compared to 64 per cent of Caucasian students).

Insights West suggests that the AMS "explore what role they can play in increasing feelings of inclusiveness and decreasing discrimination on campus, and how to help students who have experienced discrimination."

To help combat students' lack of safety on campus, AMS is hoping to augment their Safewalk program through a collaboration with UBC Football, as well as working to provide student feedback on UBC's new Sexual Assault Policy draft through consultations with UBC and students throughout September.

Only 56 per cent of students feel a sense of belonging on campus. And even as a record delegation heads to Rio, just 15 per cent felt connected to the Thunderbirds.

This statistic managed to incite a bet between The Ubyssey and Len Catling, the senior manager of media relations and communications for UBC athletics and recreation.

@UbysseyNews @ubctbirds - do this survey again next year. If not 30% - I'll wear the Thunder costume while locked in a pillory at The Nest.

Thirty-four per cent of students agreed that they have felt "passed around" between UBC services, and that that has negatively impacted the care they received, but 36 per cent say faculty members are open with their students in engaging in conversations surrounding mental health and wellbeing (as opposed to 22 per cent who disagree).

Role of factors in perceptions of a university’s excellence. Via Insights West

How are students managing?

Students at UBC — or any university — have to deal with a staggering variety of stressors, including but not limited to:

Seventy-two per cent of students rely on familial financial support, and 51 per cent rely on jobs they take during their university career.

Forty per cent of students are reliant on student loans in 2016, compared to 34 per cent last year. Just one quarter (24 per cent) expect to graduate debt-free. Among students who are able to calculate their expected debt, two-thirds (66%) expect to owe $25,000 or more.

Seventeen per cent of students feel that they might need to abandon their studies at UBC altogether due to financial pressure.

Just 58 per cent of students think they're able to manage their finances overall — 44 per cent worry about how to pay for textbooks, and 43 per cent are stressed about how they're going to pay for tuition. 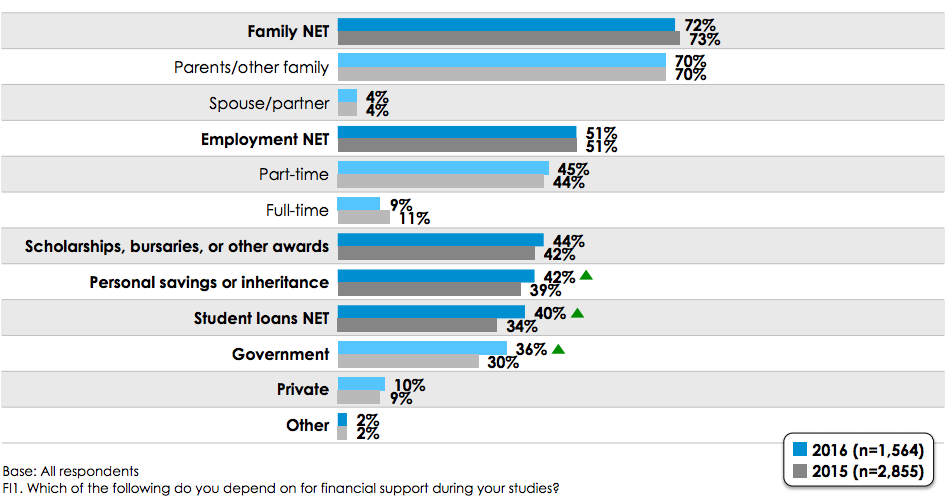 Seventeen per cent of students feel that they might need to abandon their studies at UBC altogether due to financial pressure.

There has been a significant increase in the proportion who agree that they might need to abandon their studies at UBC due to financial reasons (17%, up 5 points).

The AMS will be running an Affordability campaign this year which hopes to put pressure on the BC Liberals to demand changes to post-secondary funding.

"In addition, I believe a big part of affordability lie with ancillary costs – such as textbooks, food, housing, etc. So currently, the AMS runs a Foodbank, my office is working to further implement Open Educational Resources at UBC, and we’re working with UBC Enrolment Services towards an Awards Database, which should be completed sometime this year," said So.

Sixty-one per cent of students expect to take longer than four years to complete their degree — a growing trend as students take on more jobs and fewer courses to compensate for high tuition costs and increased demand for work experience.

A previous version of this article incorrectly stated that the AMS would be hosting a Sexual Assault policy discussion on September 30. In fact, they will be running a series of events on the topic throughout September. The Ubyssey regrets this error.