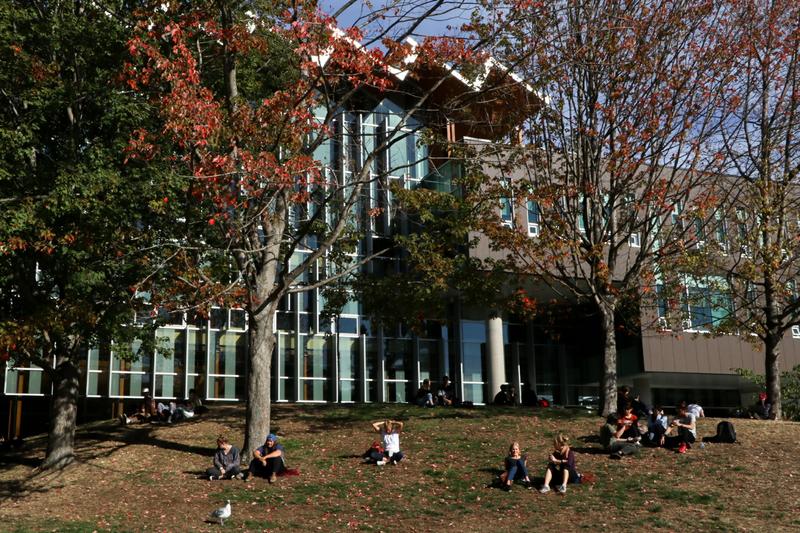 This year’s survey is the first to include statistics on sexual assault and misconduct. File Kate Colenbrander

The AMS has released the 2018 Academic Experience Survey (AES), which surveys students about their university experience, financial position, housing situation, opinions on the AMS and other topics. Similar to previous years, it was put together by Insights West, a market research company.

Many of the answers in this year’s survey are consistent with those of previous years. Students are generally satisfied with their university experience but they still feel ambivalent towards the AMS. Affordability issues related to tuition, textbooks and housing continue to be a difficulty for many students as well.

One notable difference from last year’s survey is a decrease in reported experiences of discrimination on campus, after a sharp spike in 2017.

This year’s survey is also the first to include statistics on sexual assault and misconduct.

Amongst the respondents, about one in ten reported having experienced sexual assault or misconduct from a member of the UBC community, and about one in five responded that they would not feel comfortable reporting them “to campus officials or UBC resources.”

Over half of undergraduate and 40 per cent of graduate respondents also agreed sexual assault and misconduct is a serious issue, but fewer students from both levels said they “would know how to respond appropriately” if they encountered it.

This year’s survey had 3,023 respondents — the highest number the AES has gotten in the past four years. The mean age of the respondents was 23 years old, which is an increase from last year’s mean of 22. Twenty-six per cent were under 20, nine per cent were 30 or over, while the rest were between 20 and 29. 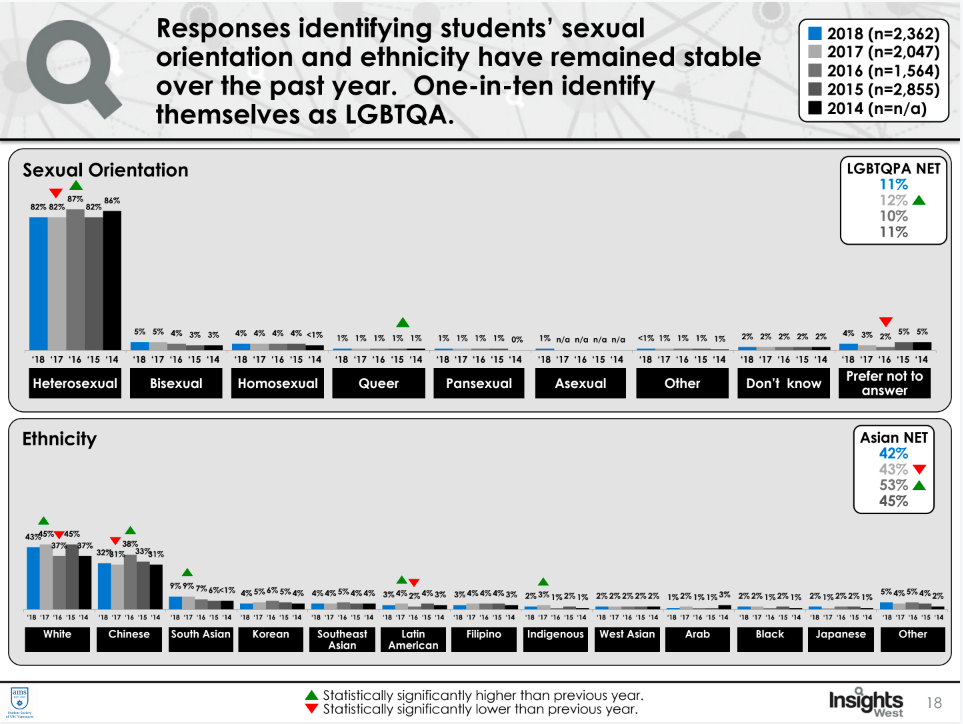 Discrimination is slightly lower, feelings of safety are slightly higher

One of the more notable results from the 2017 AES was a reported increase in discrimination: 65 per cent of undergraduate respondents reported experiencing some forms of discrimination at least once — an 8 per cent increase from 2016.

This year, the trend reversed. Fifty-eight per cent of undergraduate respondents reported experiencing some form of discrimination, bringing the statistic back to the levels of previous years.

“This was somewhat surprising,” said Max Holmes, AMS VP academic and university affairs (VPAUA). Daniel Lam, the AMS VPAUA when the 2017 AES was released, similarly said in a previous interview with The Ubyssey that he was “shocked” by the increase last year. 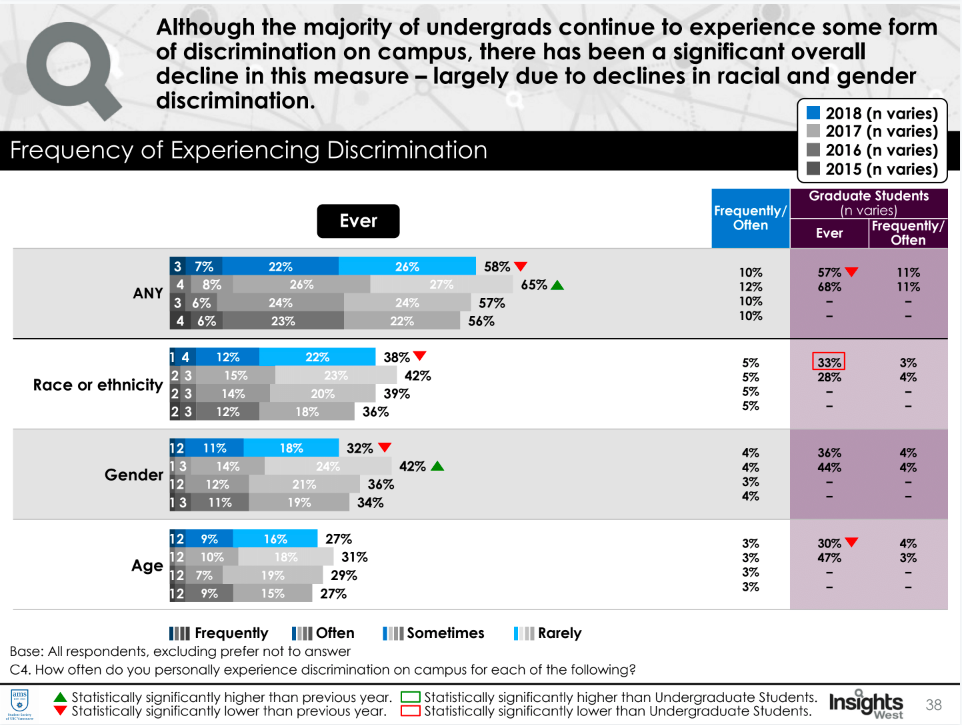 When asked about this trend, Holmes said he didn’t want to speculate on what specifically caused this bump in discrimination in 2017, but noted that the climate in those previous years was exceptional.

“I think if you ask anyone, 2016/17 was a polarizing year when it came to the issues of discrimination.”

Sixty-seven per cent of undergraduates reported feeling safe on campus at night, a sentiment that has increased steadily since the AES polled it at 55 per cent in 2015. 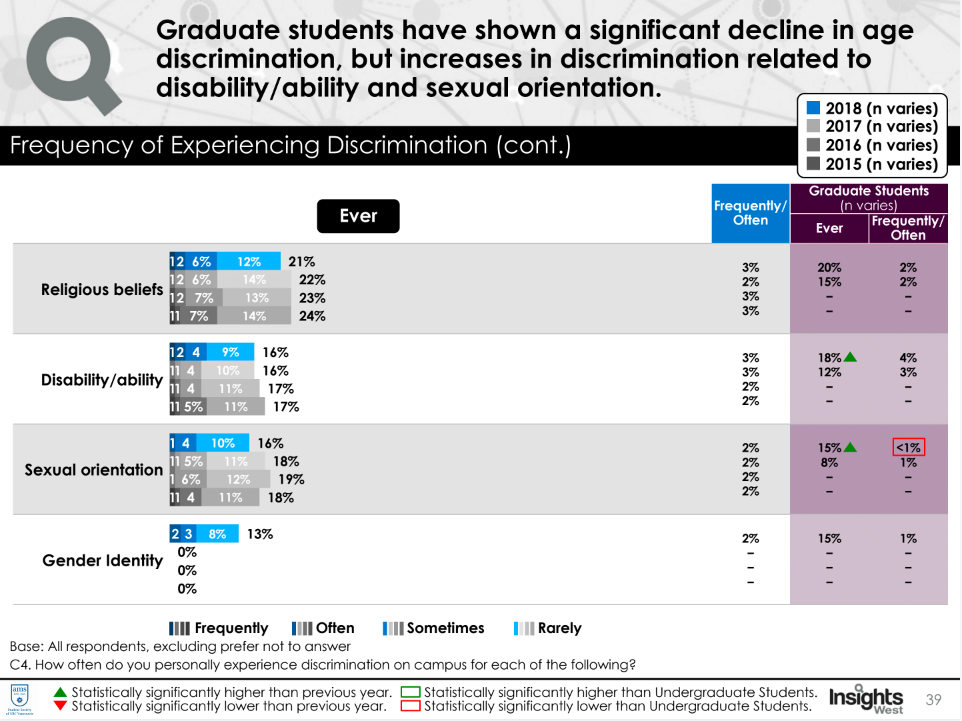 But the same statistic decreased among graduate students from 74 to 64 per cent. Holmes suggested that it may have decreased because the amount of graduate students who took the survey doubled from last year’s survey, but he still believes the AMS should explore why these results decreased while undergraduates felt more safe.

Male students were more 26 per cent more likely to report feeling safe at night than female students, a difference which Holmes described as “concerning.”

Sexual assault and misconduct at UBC

This year marks the first time the AES asked questions about sexual assault and misconduct at UBC. To avoid triggering some respondents, students were given the option to skip this section — twenty-five per cent of undergraduates and 28 per cent of graduates chose to skip it.

But beside this reason, Holmes also suggested that others simply skipped it to make the survey shorter.

“It was at the end of the survey, and it was a long survey,” he said, noting that the demographics of those who skipped the section were similar to those of the overall survey.

“If there’s anyone on campus who thinks this is an issue that affects a small number of students or anything like that, they’re wrong,” said Holmes, who suggested that the actual statistic is likely higher.

“It is really hard to answer surveys like this and to admit that something like that has happened…. And the important thing is, this wasn’t the amount of people who faced sexual assault or other misconduct at UBC, this is the amount of people who have faced sexual assault or misconduct by a member of the UBC community. This is conduct that falls under Policy 131.”

In a March interview with The Ubyssey, outgoing UBC VP Students Louise Cowin agreed that the statistics were probably underreported, saying that “they were quite low compared to what statistics [she has] read.”

Just under half of undergraduate and graduate respondents said they would feel comfortable reporting the incident to university officials and accessing resources from either the UBC Sexual Violence Prevention and Response Office (SVPRO) or the AMS Sexual Assault Support Centre. Around one in five respondents disagreed.

“I think the most concerning thing is we’re not getting a majority in any category of people agreeing,” said Holmes.

“There’s a lot of people who are saying that they don’t know, and that’s also where we really get to the awareness and the education piece and how UBC needs to do more in this year to educate students that are coming into the university.” 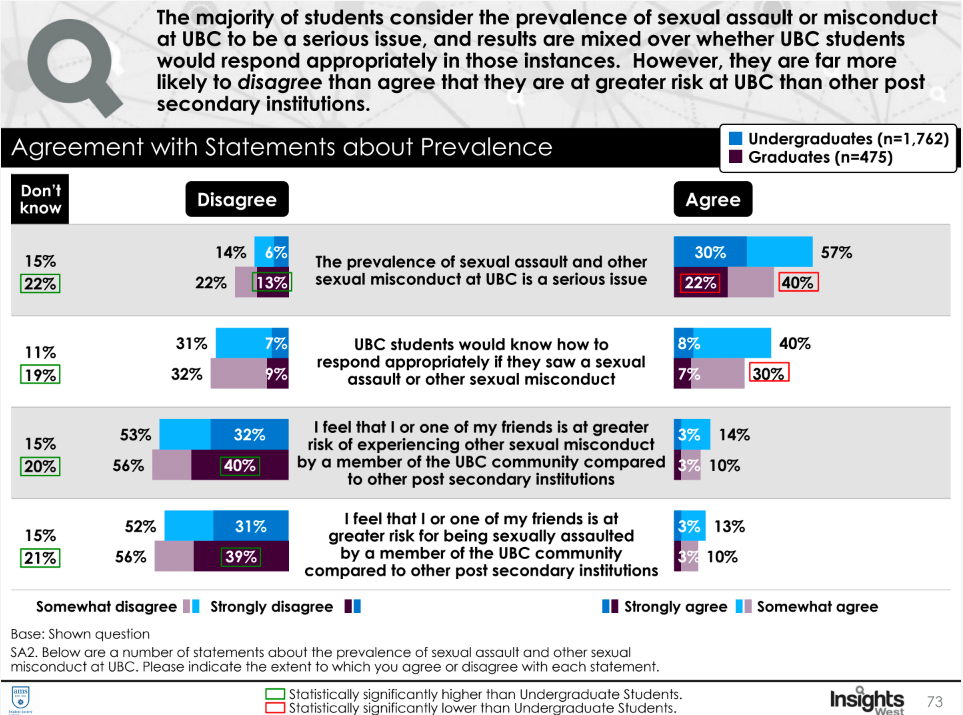 Cowin viewed students’ responses about their comfort with accessing SPRVO in a more positive light.

“Twenty per cent of students said they would not feel comfortable accessing services from SVPRO — well 80 per cent at least would be, and I think that that’s pretty impressive,” she said in the March interview.

“If you were to ask any student with respect to their comfort about something like accessing counselling services on this campus, I wouldn’t be surprised if you were to get another similar result.”

But according to the 2018 AES, out of the 80 per cent of undergraduates who did not say they would feel uncomfortable accessing UBC resources, only 45 agreed that they would feel comfortable, around 15 per cent selected “don’t know” and three per cent preferred not to answer.

Students like their university experience overall — the AMS, not so much

Seventy-one per cent of undergraduates agreed that they were satisfied with their UBC experience, while 11 per cent disagreed.

Only 50 per cent agreed that they were receiving good value for their tuition fees, while 26 per cent believed they were not. And while the number of respondents who disagreed that the university cared about what students think of the cost of education decreased from last year’s number, it still includes more than half of respondents.

Holmes pointed to the university’s annual two per cent increases in tuition — which are usually met with heavy opposition from students in consultation — as a reason for this.

“Students give you their responses, and year over year we’re seen more and more responses in the consultation, and it’s the same result. The increase happens and we just continue on our merry way, or at least the university does.” 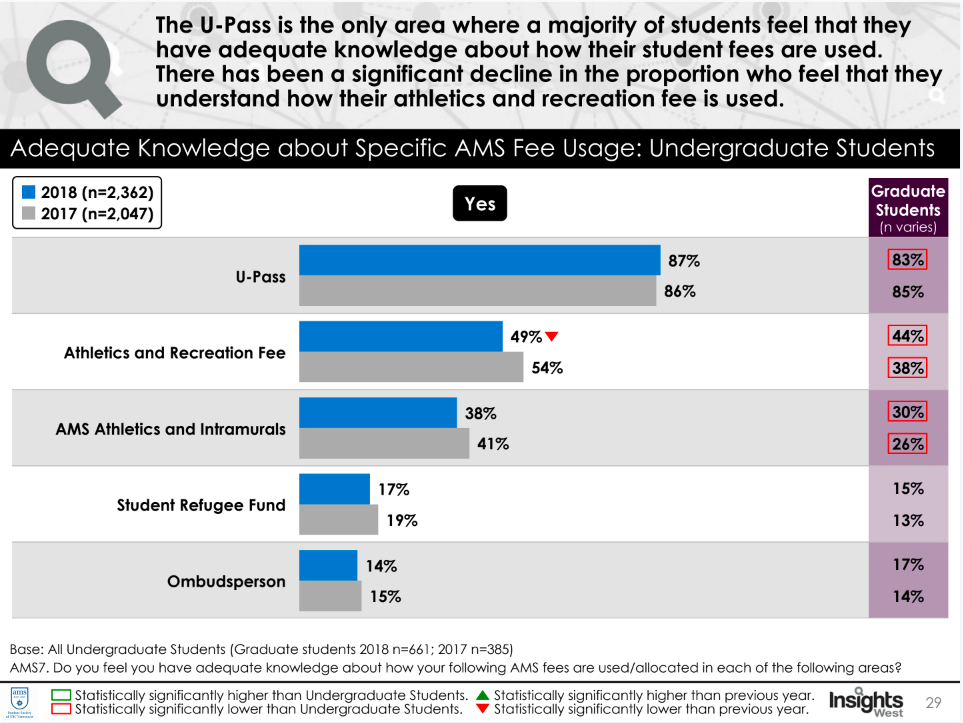 Students’ reviews of the AMS continue to be mixed.

Holmes attributed these numbers to poor communication with students about the AMS’s activities and the advocacy they do in areas such as tuition and housing affordability.

“This year’s executives have recognized that communication is a major issue for the AMS, and that we need to be doing more to communicate to our students,” he said.

“What we have to look at there is, obviously, we’re still not doing enough.”

UBC students are in agreement that the rent in Vancouver is too high. 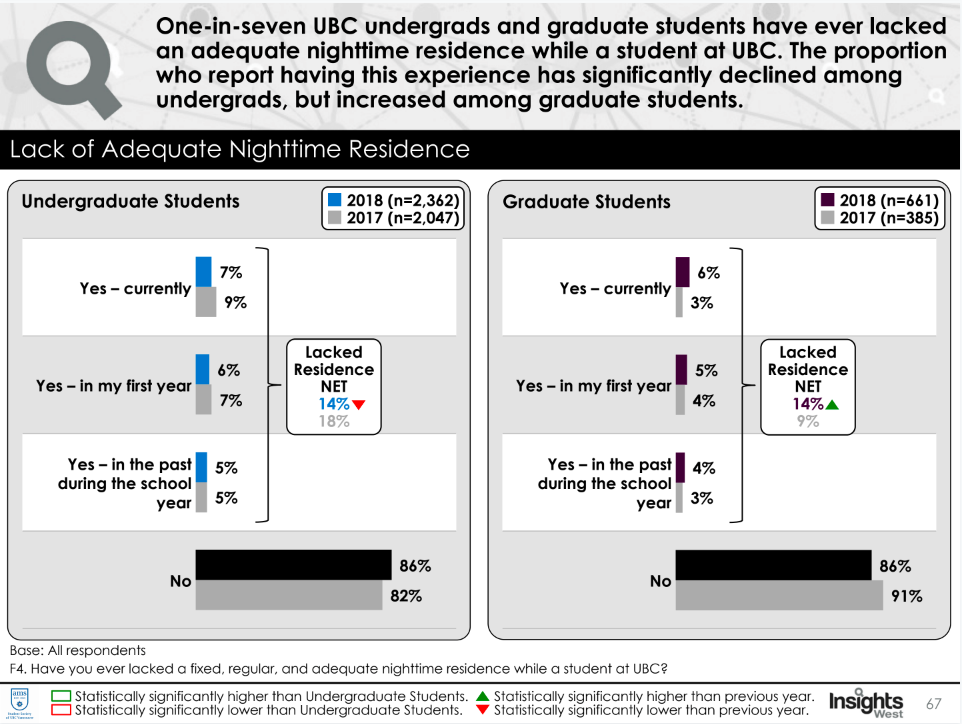 “This is gonna be an issue for the students that we want to be attracting to UBC,” said Holmes. “If students don’t feel like they can afford to come to this university, they’re going to go to other universities.”

Holmes, however, did cite that the AMS has made a number of gains in their housing advocacy — he pointed out that the AMS successfully advocated for a two per cent plus consumer price index cap on student housing rates, as well as expansion for student housing. In particular, the Walter Gage Infill student housing project, which is to be completed in summer 2021, is expected to bring 1,000 beds for upper-year students.

Sixteen per cent and 23 per cent of undergraduate and graduate respondents, respectively, agreed that they might need to abandon their studies at UBC for financial reasons. 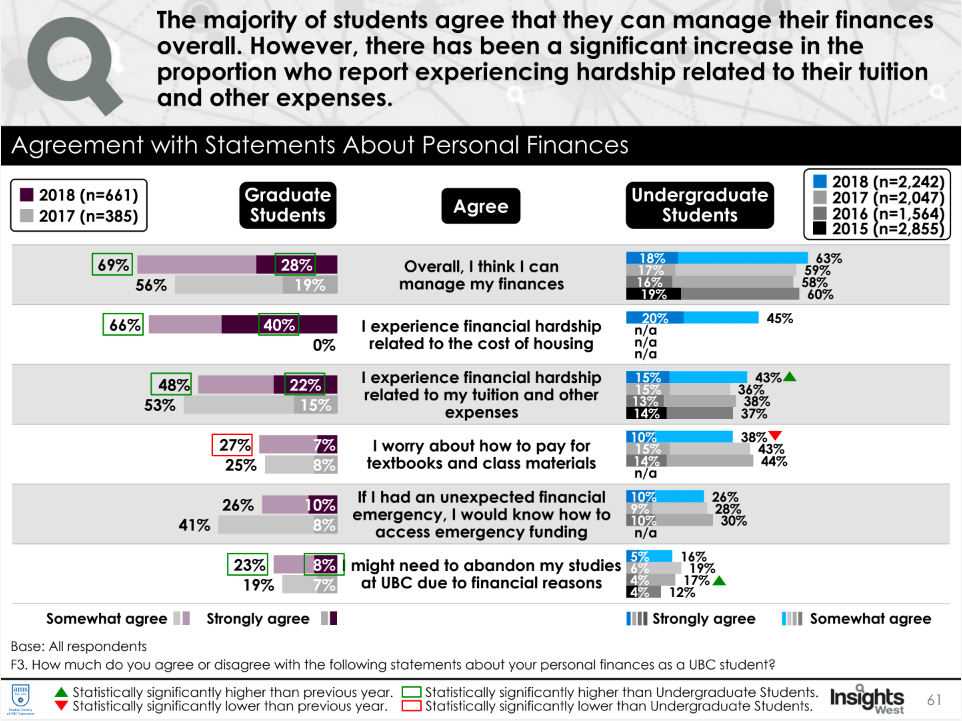 Textbook prices continue to be excessive as well.

“This is probably one of the more shocking results that we got,” said Holmes, who tied this statistic into an overall affordability crisis at the university.

To combat this affordability crisis, Holmes said that the AMS will be pushing for more open educational resources, greater transparency about the costs of online assessment materials and a freeze on continuing tuition increases.

This article has been updated to clarify the AMS’s approach to combatting tuition affordability issue.