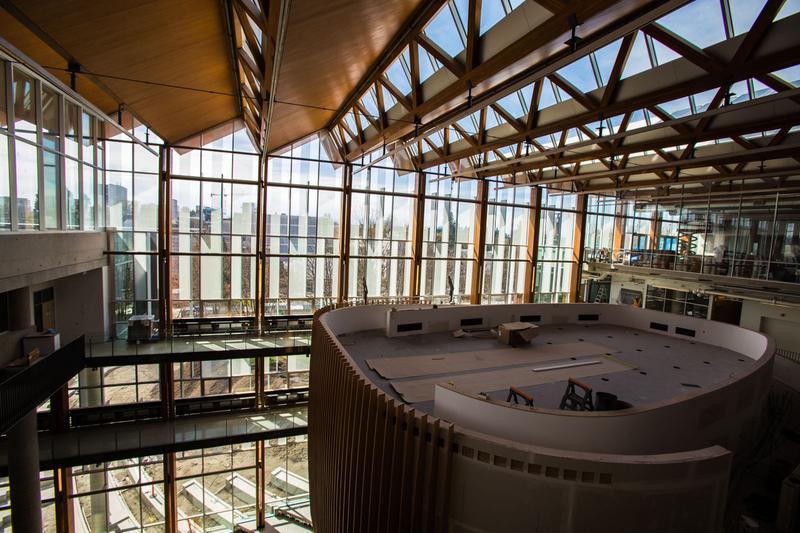 2,926 students participated in the survey. This is down from last year’s numbers of 3,023 respondents. File Cherihan Hassun

The AMS has released the results of its 2019 Academic Experience Survey (AES) which was conducted in collaboration with the research firm Insights West. Similar to previous years, the AMS polled students on their UBC experience, finances, housing, discrimination, opinions of the AMS and other topics.

According to the results, students continue to lack confidence in how the AMS spends student fees, but view the society favourably. Despite being generally less financially secure, students are also satisfied overall with their university experience.

Notably, the AMS did not include any questions on transportation this year as they had in previous years.

“We do have a lot of question sets that we turn off and only ask every couple of years to keep the survey pretty condensed so we don’t have survey exhaustion,” said Julia Burnham, AMS VP academic and university affairs.

This year, the AES report separates graduate student data from undergraduates. The Ubyssey focused on undergrad data for this recap.

According to this year’s report, 2,926 students participated in the survey. This is down from last year’s numbers of 3,023 respondents.

“Three thousand was our goal and we were just shy, unfortunately,” said Burnham. However, she claimed that the Undergraduate Experience Survey, the “hegemonic” equivalent run by the university, only received around 500 more responses.

This marks the first year when gender options beyond ‘male,’ ‘female’ and ‘other’ were added. One per cent of respondents identified as non-binary or gender queer, and less than one per cent identified as two-spirit.

Burnham explained this would help with cross tabulations that show how certain demographics intersect. 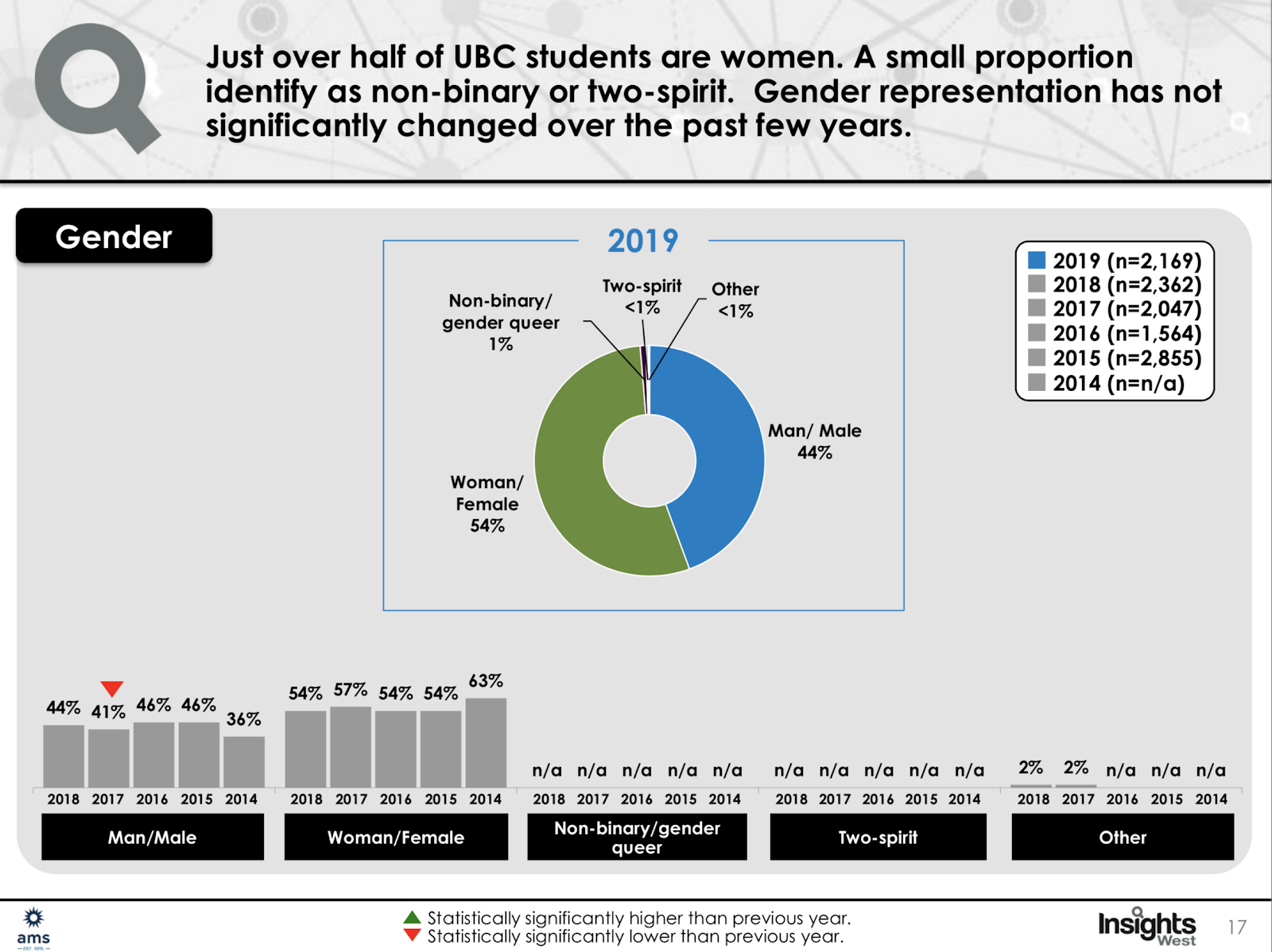 This marks the first year when gender options beyond ‘male,’ ‘female’ and ‘other’ were added. Courtesy AMS

As with previous years, more women responded than men ⁠— 54 per cent compared to 44 per cent.

The survey saw the largest queer-identifying respondent pool since 2015 with 13 per cent surveyed answering they were lesbian, gay, bisexual, transgender, pansexual or asexual.

Ethnically, 28 per cent of respondents identified as Chinese, 4 per cent less than in 2018 and the smallest percentage in the past five years.

One in two students rated the AMS favourably. However, one in three students distrust the AMS with its finances, a statistic Burnham called “unacceptable.” This comes despite agreement with the statement “I trust the AMS to spend my money wisely” increasing three per cent since last year.

Confidence in the AMS to represent students’ academic and financial needs to the university saw similar increases, ten and seven per cent respectively. 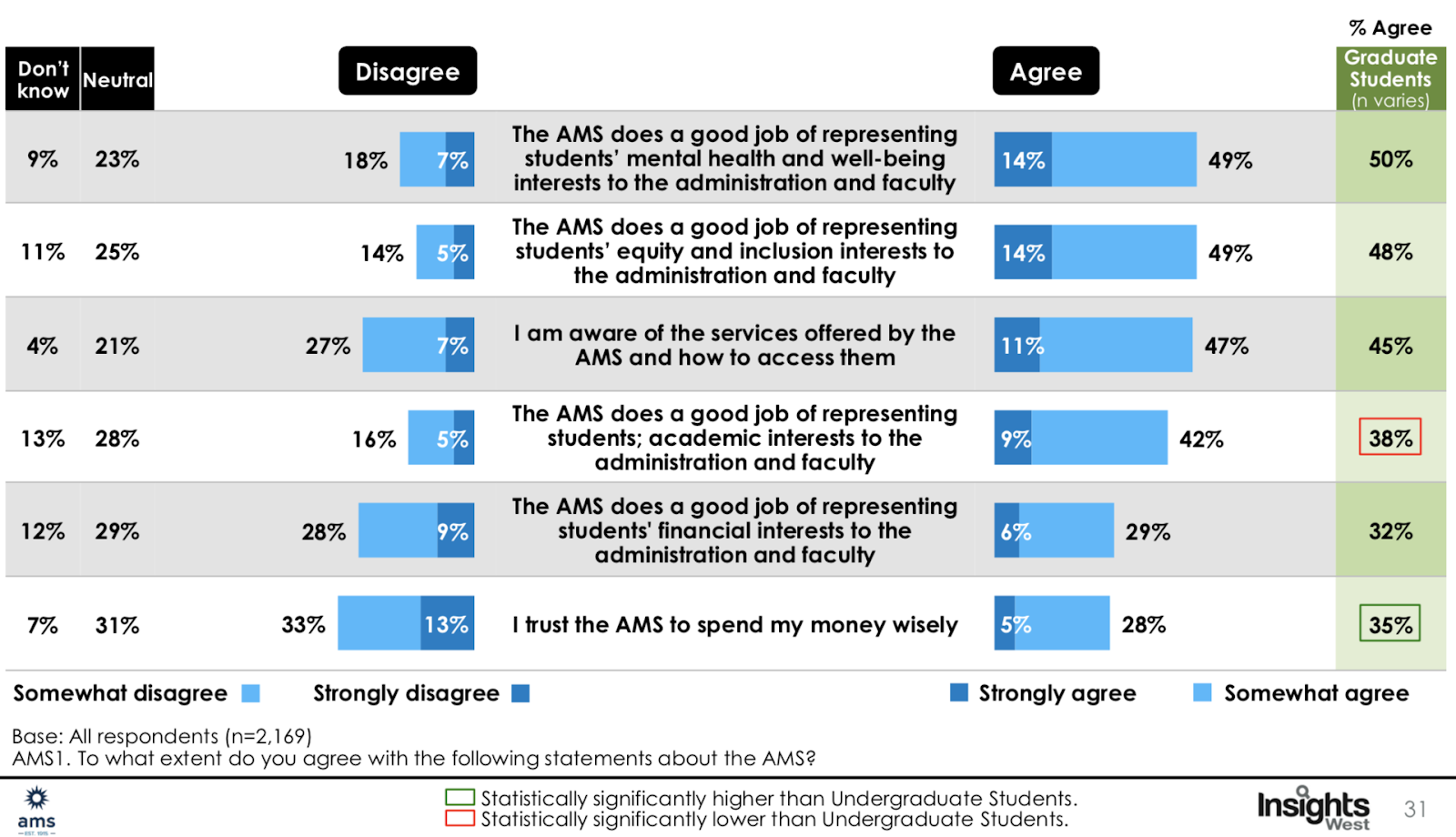 One in three students distrust the AMS with its finances, a statistic Burnham called “unacceptable.” Courtesy AMS

When asked about UBC, 70 per cent were satisfied with their university experience.

Ninety-one per cent said they chose UBC because of its “good overall reputation.” Down the list, 58 per cent cited the “west coast lifestyle.” What exactly that means is left for respondents to decide.

“I think the west coast lifestyle is whatever you make it to be,” said Burnham. “I come from the east coast and there’s definitely a different pace of life in a city on the east coast versus a Vancouver[-like] city.”

Thirteen per cent of women reported experiencing sexual misconduct by someone outside the UBC community and eight per cent by a UBC community member. These numbers are noticeably higher than the four and three per cent reported by male respondents.

However, only 48 per cent of students said they were concerned about the “prevalence of sexual assault at UBC.” Burnham argued that this issue is far from unimportant.

“We know that people are concerned about it because this is an issue that everyone should be concerned about, frankly,” she said. “So knowing how many people are doesn’t really add fuel to the urgency of the work that we already feel.”

After last year’s incident — where the AMS cut funding to the Sexual Assault Support Centre (SASC) and then reversed the decision shortly after — this year, 89 per cent of respondents were aware of the support service. This constitutes a six per cent increase that brings awareness back to 2017 levels.

Of those who used SASC, 61 per cent said it was “significantly” or “somewhat” helpful, 11 per cent more than the previous year.

Of those who used SASC, 61 per cent said it was “significantly” or “somewhat” helpful, 11 per cent more than the previous year. Courtesy AMS

“I think [its increased awareness] demonstrates the conversations happening about SASC last year, and how more students have more than just a logo that they were aware of,” she said. “There’s been so many more people who’ve been exposed to SASC in more of a[n] education way rather than the support services way.”

SASC’s awareness was greater than that of the university’s service, the Sexual Violence Prevention and Response Office (SVPRO), which UBC established in 2018 in accordance with Policy 131 on Sexual Assault and Other Sexual Misconduct. 77 per cent of respondents knew about SVPRO and 49 per cent found it helpful.

Although SVPRO awareness has increased eight per cent and helpfulness nine per cent since 2017, Burnham attributed the marked difference between SASC and SVPRO figures to SVPRO’s youth and institutional ties.

“I think the newness really is a contributor to the levels of relevant distrust that we see in SVPRO, but as well, [it’s] recognizing that that’s an institutional space,” she said. “There’s still a lot of work to be done by the university to make sure that they are being accountable to survivors and to the review process upcoming for policy 131.”

“I think that there’s a lot of potential with SVPRO to really be able to be a space that survivors have choice and they can choose where they want to go.”

Fifty-seven per cent of students agreed that they can manage their own finances, marking a six per cent drop since last year. One in five students agreed with the statement “I might need to abandon my studies at UBC due to financial reasons,” a figure that is at its highest since 2015.

Among grad students, 85 per cent responded they received financial reward “directly from UBC,” an increase of 9 per cent from 2017.

Forty-four per cent of students indicated that they struggle financially with housing. Three per cent said they currently lack “adequate nighttime residence,” an all-time low for this question. However, Burnham said she questions data on adequate overnight housing, which she defined as having “somewhere to sleep that is safe with a roof over your head, and you know you can go to every single night.”

“We’ve always been a little bit hesitant about this particular data,” she said. “Just because we’re unsure if all the respondents truly understood in previous years what that meant.”

Textbooks continue to be a financial hardship, with students paying a mean of $829 and a median of $400 a year. 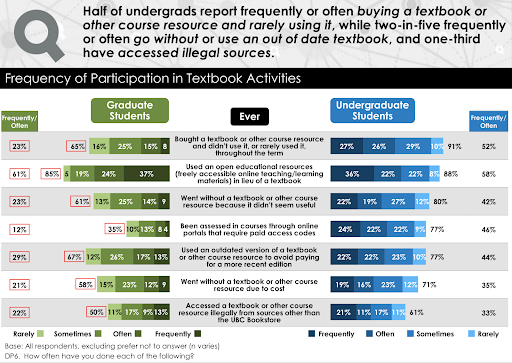 Four in five students have gone without an assigned textbook because “it didn’t seem useful.” Courtesy AMS

Sixty-one per cent of respondents have “accessed a textbook or other course resource illegally from sources other than the UBC Bookstore.”

“Students are becoming a bit more savvy on the sort of history and context of textbook prices, and then what solutions are out there in the world to combat them,” said Burnham. “ [They’re] becoming really better advocates for themselves around textbooks.”