The AMS and the Graduate Student Society (GSS) have released the results of both of their graduate student experience surveys, which polled grad students on topics including finances, well-being and the campus community.

The AMS’s annual Academic Experience Survey (AES) has polled graduate students since 2017, but 2019 marks the first year where graduate student data was separated from undergraduate data in the report released in collaboration with research firm Insights West.

“One of the pieces of feedback that we’ve repeatedly gotten year after year is the differences between an undergraduate and a graduate experience,” said AMS VP Academic and University Affairs Julia Burnham in a September interview. “So this year, we decided that we were going to really highlight that within the report itself.”

“We are sifting through,” said GSS President Nicolas Romualdi. “So we’re releasing data as we keep processing because we want to make sure that we’re very accurate with what we’re saying.”

According to the SSS, grads continue to face housing and food insecurity and student-supervisor relationships define students’ university experience.

GSS picks up where the AES leaves off

Of the 2,926 AES respondents, 26 per cent were graduate students — the highest number of grads surveyed since 2017. The SSS received 795 responses or eight per cent of all UBC grad students.

Romualdi explained that the SSS avoids survey fatigue by homing in on topics not covered by the AES that are relevant to graduate students. These include food insecurity, funding and student-supervisor relationships.

“We’re going to look into not asking [the same things] again because we can get the data through the AMS survey and [so] we don’t fatigue students with asking the same question over and over,” he said. 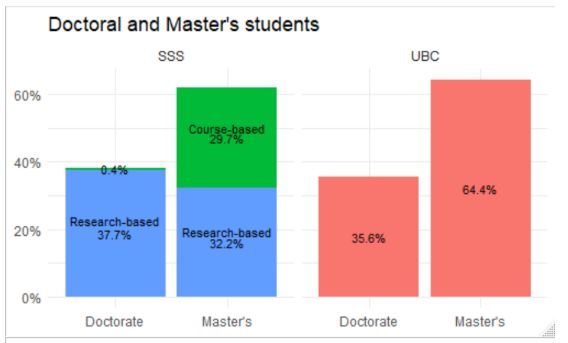 Fifty-seven per cent of doctorate students polled for the SSS identified as women, as well as 68 per cent of master’s students. These figures are higher than those reported by UBC — 48 and 61 per cent respectively. About two per cent of SSS respondents identified as neither male nor female.

Three in five grad students are domestic students compared to four in five undergrads, the AMS reported. Overall, 30 per cent of graduates identify as persons of colour.

According to the AES, graduate students gave the AMS a passing grade, with 54 per cent rating the society at a 7 or higher out of 10 and a mean rating of 6.4. Neither the AES or SSS asked about respondents’ opinions of the GSS.

Notably, 35 per cent of grads agree with the statement “I trust the AMS to spend my money wisely” — seven per cent higher than undergrads.

“I think [the AMS and the GSS are] in a position where we understand that we want the same things,” said Romualdi. “And where we don’t, we don’t actually have opposing interests. It’s just that we have slightly different priorities.” 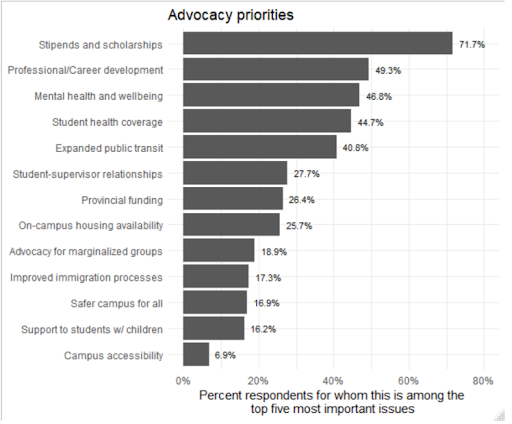 Of graduate AES respondents, 79 per cent said they were “satisfied” with their UBC experience, slightly higher compared to only 70 per cent of undergrads. Courtesy GSS

Graduate students also view UBC favourably. Of graduate AES respondents, 79 per cent said they were “satisfied” with their UBC experience, slightly higher compared to only 70 per cent of undergrads.

For comparison, only 32 per cent of undergrads reported gender discrimination and 25 per cent reported age discrimination. That’s six and five per cent less than graduates, respectively. 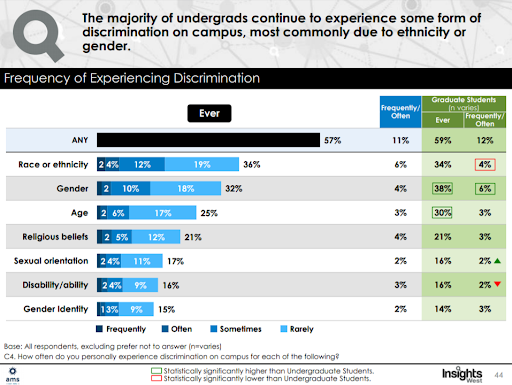 Benbow hopes to reduce gender and sexuality discrimination by holding events for marginalized students and raising awareness in the GSS newsletter. Courtesy AMS

“A lot of graduate students at UBC feel as if the air of the campus is not one that fosters openness or equality,” said Tarique Benbow, GSS VP university and academic affairs.

Benbow hopes to reduce gender and sexuality discrimination by holding events for marginalized students and raising awareness in the GSS newsletter.

“We hope that by doing these things that we’ll be able to eventually create an environment that is safe, that is very open, so that … people who are of varying background … can feel at home,” he said. “Because that’s essentially what we all want to feel like when we come on campus, right? So home away from home.”

AES results show only 25 per cent of graduate students are involved with clubs, much less than the 52 per cent of undergraduates.

Romualdi said that part of this can be chalked up to little dedicated space for graduate students.

He said that the UBC president’s office has given the GSS $50,000 to renovate the GSS loft in the Nest. Anticipated additions include conference and meeting rooms as well as a bookable lounge to hold social events.

In the long term, the GSS is considering renovating its office at Thea Koerner House to use it “as a hub for community building.”

“There’s a lot of support for [renovating Thea Koerner House], but it’s a major project so it’s a couple years away still,” said Romualdi.

According to the SSS, a graduate student’s mean yearly income is $16,781. The province’s Market Basket Measure defines the poverty line as $20,000 — 49 per cent of grad students earn below this amount. 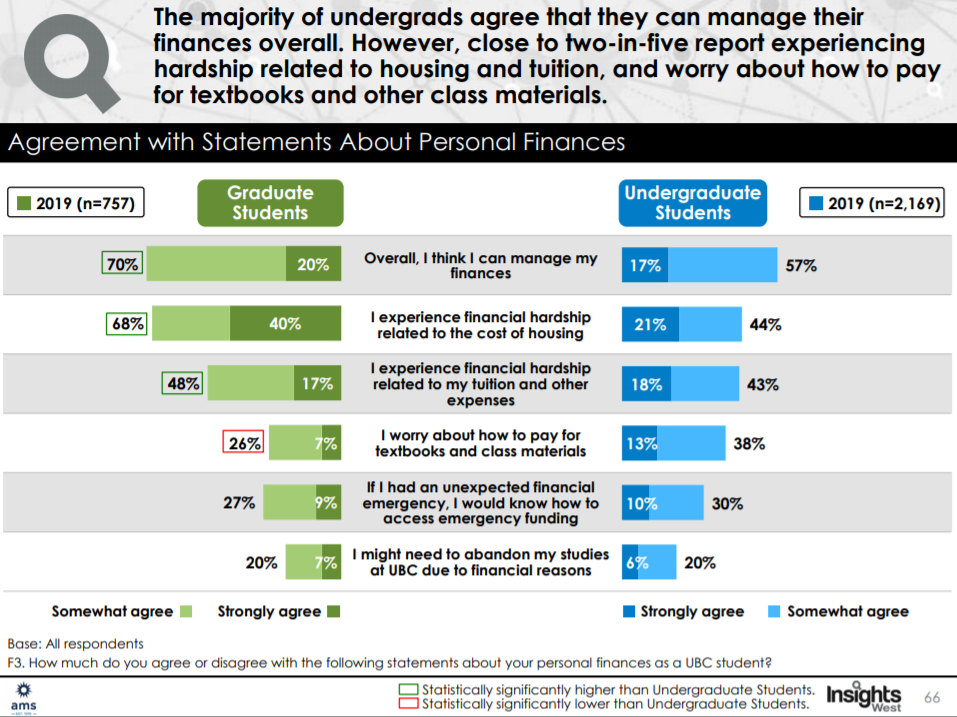 70 per cent of graduate students polled by the AES said agreed with the statement “Overall, I think I can manage my finances.” Courtesy AMS

The university must provide PhD students a minimum funding package of at least $18,000 each year of their degree. Of both master’s and doctoral students, one in five said their program didn’t provide any stipend at all.

Regardless, Romualdi says this may not be enough.

“Throughout the years at UBC, their [graduate students’] income packages may not change,” he said. “[But] tuition goes up, housing goes up, food prices go up and cost of living goes up.”

More than half of graduates work another job outside of teaching and research, according to the SSS.

Despite this, 70 per cent of graduate students polled by the AES said agreed with the statement “Overall, I think I can manage my finances,” compared to only 57 per cent of undergraduates. 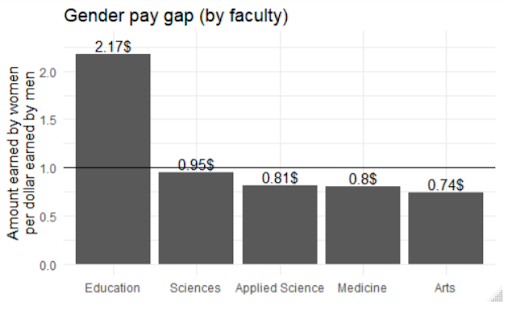 In all faculties except education, women graduate students earn up to 26 cents less for each dollar men earn. Courtesy GSS

The SSS report also identified pay gaps by faculty between men and women in annual income. In all faculties except education, women graduate students earn up to 26 cents less for each dollar men earn. The exception is education, where women earn more than double what men make.

Just over half of graduate students live farther away from campus than preferred, the AES shows. Forty-six per cent have considered switching schools due to the cost of housing.

A three-fourths majority of SSS respondents live off-campus. While the AES didn’t ask about transportation this year, SSS results show that three in five grad students take public transit to work with a mean commute time of 35 minutes. 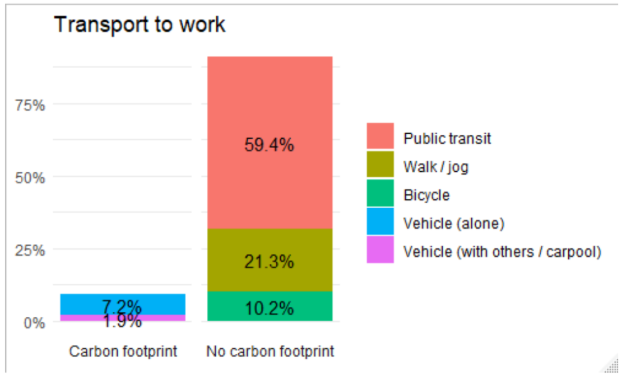 Romualdi agrees that housing is an issue, saying that it’s “complicated.”

“This is why we work with the AMS to advocate [for an] increased number of housing seats on campus because there are not enough. And this is an example where our advocacy goals align directly because it’s a win-win situation. The more housing we have on campus, the better for everyone.”

For food insecurity, 45 per cent of graduates polled for the AES said they had “worried that [they] might run out of food before [they] had money to buy more groceries” at least once. Sixteen per cent experience this monthly. 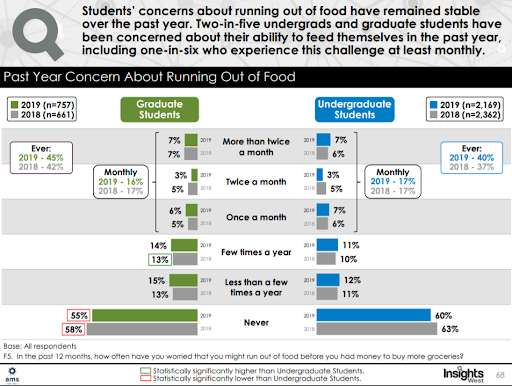 45 per cent of graduates polled for the AES said they had “worried that [they] might run out of food before [they] had money to buy more groceries” at least once. Courtesy AMS

“I think it’s great that stopgap measures have been put in place for students who are food insecure such as the food bank, awards, discount plans,” said Romualdi.

“ … Because when you’re not eating, you don’t want to hear about a three-year policy-review process to somehow come up with something that will help you. You want to eat. Now. Today.”

At the same time, Romualdi acknowledged that graduate students need a long-term solution.

“We’re … think[ing] through what is the best policy we can come up with because we don’t want [to] at any point advocate for a policy that may disadvantage a student,” he said.

“ … I know when you’re not eating, this is not what you want to hear, but we want to make sure that we do this correctly and we don’t actually compound a problem, but rather come up with a solid framework and strategy that benefits graduate students at UBC for the foreseeable future.”

An issue specific to graduate students, student-supervisor relationships are an indicator of graduates’ satisfaction with their university experience. SSS results reveal a correlation between the frequency of supervisor meetings and academic satisfaction. 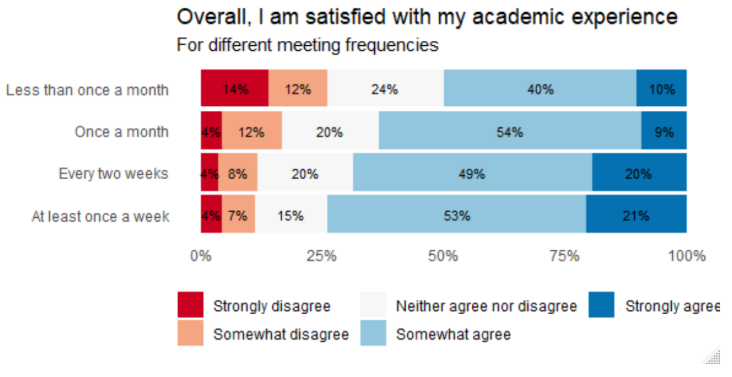 SSS results reveal a correlation between the frequency of supervisor meetings and academic satisfaction. Courtesy GSS

“If you aren’t having an amicable relationship with your supervisor, quite likely you’ll have a very disastrous graduate experience,” said Benbow.

According to the AES, 16 per cent of undergrads reported having a mental illness, on par with the 19 per cent of graduates as reported by the SSS.

Among graduates, the SSS reports this figure as 18.5 per cent. Women are twice as likely than men to experience mental illness and one half of those who identify as neither a man nor a woman face mental illness.

“If you are about to run out of money every month and you’re living paycheque to paycheque, stress appears. This doesn’t combine very well with research responsibilities, teaching responsibilities. So that’s when the mental well-being begins to deteriorate,” said Romualdi.

“Stopgap measures are great, but let’s not just stop at that and look at the underlying cause and let’s take our time to think it through. We’re researchers. We think and overthink things.”