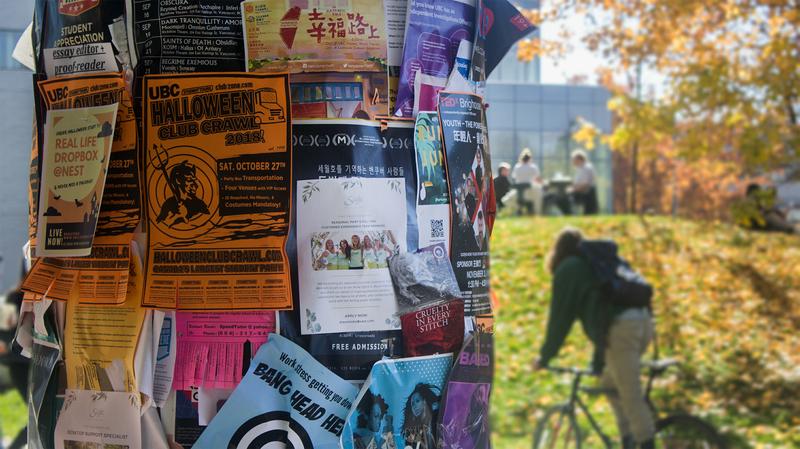 Besides eliminating poster infractions, the ban was intended to reduce the environmental impact of elections. File Shamit Rahman

Walking through the Nest, you might not even realize that AMS Elections are well underway.

That’s because this is the first campaign period after the AMS banned postering — and with changes in candidates’ campaign strategies, students are divided on how this affects their elections awareness.

“With posters, I used to be able to walk up to people and [they would] say, ‘Hey, I know your face. Your headshot’s everywhere.’ Now, people are just going to have to recognize you [as] the guy who just constantly goes around the Nest saying hi to people and giving candy.”

Interestingly, students in the older groups — who presumably have experienced elections with posters all their years at UBC until now — were most likely to say the ban did not affect them.

Second-year computer science student Oscar Yu was one of those who said they were still able to stay informed.

“[I]t hasn’t affected my ability to follow the election at all,” he wrote in a message to The Ubyssey. “[I]n fact, I think it may be beneficial politically, as more educated voters will be voting for those who are more suitable for the position, rather than the one whose name is plastered all over UBC!!”

“In all of my classes, at least two or three candidates have come in at different times to make announcements,” said Sahibzada.

“I suspect this year it’s going to be decreased in turnout just because [last year] there was every single one of our faces literally everywhere in every corner you walked into,” she said.

Although classroom announcements continue to be a staple in election campaigns, candidates such as Hakim have also focused efforts on canvassing outside the classroom.

“With posters in the past, that meant your passive way of letting people know elections [are] happening is when you see Buchanan just filled with people’s faces constantly,” he said.

But a key limitation of this is human effort: not all candidates have the energy of a social butterfly, and they can only have so many volunteers reach out for them.

“If you’re more of somebody who enjoys the prospect of talking to people, or have at least the social battery or the stamina to do it, it doesn’t make it too hard for you,” Hakim said.

“I didn’t have any volunteers for my campaign last year, so I have a very vivid and painful memory of spending four hours straight just walking across campus with all of my posters.”

Part of an overall trend toward online campaigning, candidates continue to leverage social media advertising, something that Liang did with getting her friends to repost her content and Burnham did by purchasing ads.

“Not having to have that stress is very nice because I think we got a lot of really petty complaints and it was really just a waste of the election administrator’s time,” said Burnham describing cases where posters were moved to cover those of other candidates.

Besides eliminating poster infractions, the ban was intended to reduce elections’ environmental impact. But Liang said that the impact is unclear given another form of campaigning: “wasteful” lawn signs. Not only are they more expensive for candidates, it’s unclear how easy it is to recycle the plastic they’re made of.

“[Lawn signs are] just to be used once,” Liang said. “And then now, [mine] sit in my garage and my mom is like, ‘Lucia, why don’t you finally throw your face out?’”

Sahibzada said he approved about 13 lawn sign designs this year. Still, students like Yu appreciate the amount of paper saved.

“I definitely agree with banning posters and I’m so happy the AMS is taking steps to prevent the negative environmental impacts that comes with printing hundreds of posters!!!” he wrote.

But with a lack of on-the-ground material, the role of the elections committee is as important as ever. Sahibzada gave kudos to his elections teammates for their work on “one of our biggest goals”: spreading the word to students.

In 2019 only about 21.7 percent of students voted, and that number will likely be even lower in 2020 without last year’s U-Pass approval referendum, which historically boosts turnout.

Sahibzada explained that the impact of the poster ban won’t be known until results come in as voting opens this week. But regardless of the ban, the goal of increasing voter turnout remains.