Crediting feedback from students and the AMS, Translink retains the 480 route for peak hours 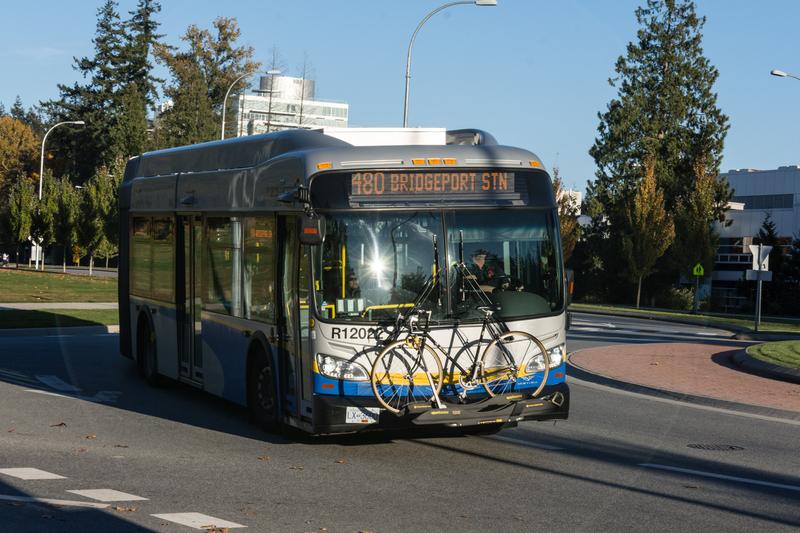 Translink has decided to continue operating the 480 bus line with peak-periods service only, reversing an earlier proposal to cancel the route altogether. The target frequency will remain the same, with buses arriving approximately every 12 minutes.

“During the a.m./p.m. peak commute times when there is most demand for the services, we recommend that the 480 stay in place,” said Rex Hodgson, a senior planner with Translink.

The 480 runs directly from Bridgeport Station to UBC, and is one of the main bus routes that students from Richmond and beyond take to get to campus. Cancelling it would have meant students travelling from Richmond would have to take the Canada Line and transfer to buses towards UBC.

Opposition from UBC students and a concerted lobbying effort by the AMS contributed to Translink reversing its original proposal, according to Hodgson.

When the proposed cancellation was made public for consultation over the summer, students expressed dissatisfaction online. Posters were also found at UBC Exchange Bay 6 — the route’s stop — encouraging people to fill out the online survey on Translink’s website.

Out of over 3,200 people who completed consultation surveys on the 36 proposals contained in phase one of the plan, over half of respondents submitted feedback related to the 480 bus route. Hodgson also pointed out that the majority of people who take the 480 are UBC students and staff, and that it is “pretty clear” that students were among those expressing displeasure with the original proposal to cancel the 480.

“All of it was concerns with what we were proposing,” he said. “We took that into account and modified the proposals accordingly.”

The AMS was also heavily involved in the consultation process.

After receiving emails from students expressing dissatisfaction that their commute from Richmond would be disrupted, AMS reached out to students to better understand the issue. It also conducted a social media campaign encouraging students to complete Translink’s online survey.

The AMS then sent a five-page letter to Translink outlining student concerns, including increased congestion on the Canada Line, the inconvenience of additional transfers and longer commute times.

“Although the 480 may have decreased slightly in overall ridership, it remains a key connection for riders from Richmond, Surrey, Tsawwassen, White Rock, and beyond,” reads the letter. “This indicates that the value of the 480 remains, especially to students of UBC who commute to the university from East/Westbound areas.”

It also offers alternative suggestions, such as rerouting the bus line, limiting operations to peak hours and reducing the number of stops. 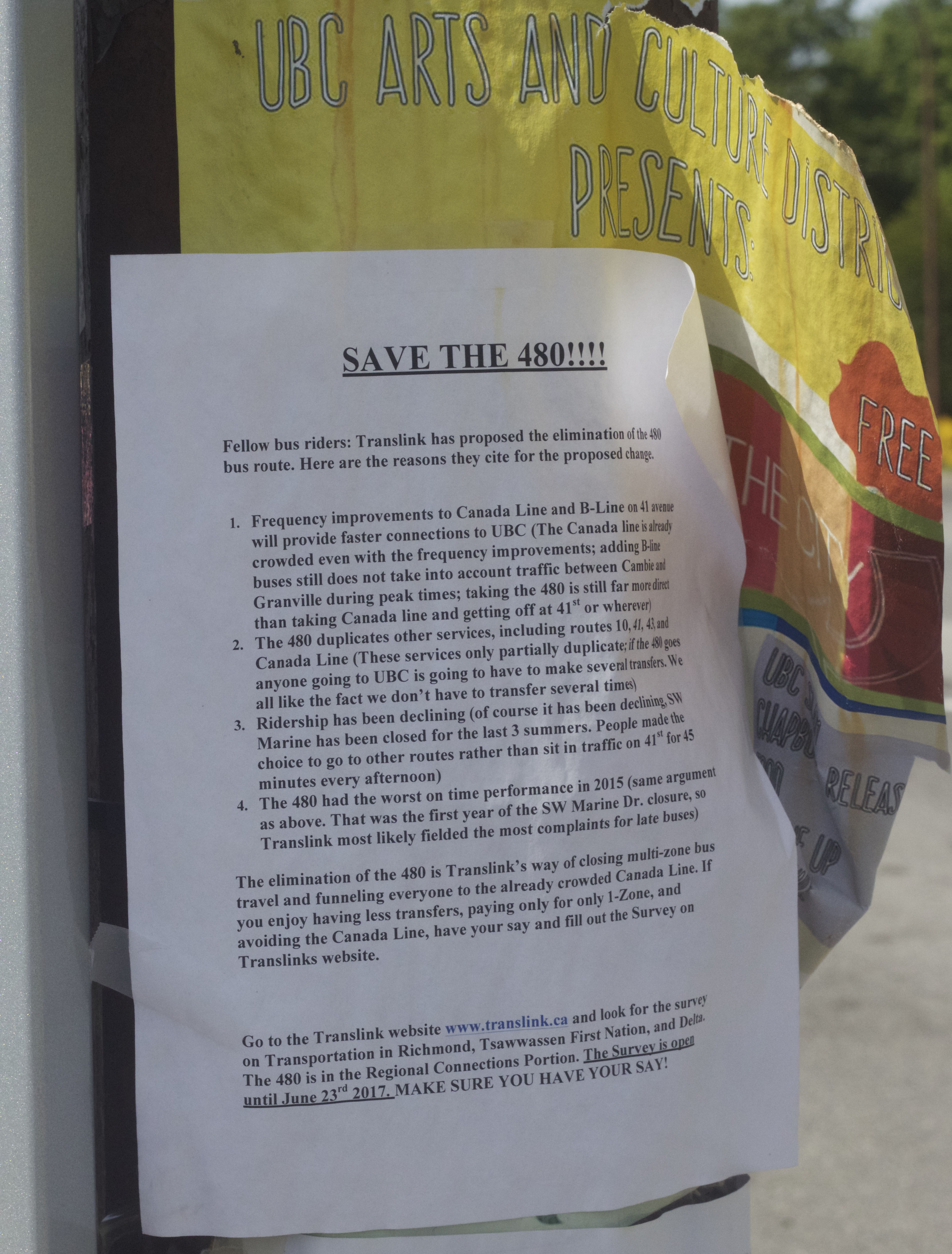 A poster found at Bay Exchange 6 urging students to save the 480 route. File Alex Nguyen

In the end, Translink accepted a suggestion from AMS that the 480 be switched to peak-period only service.

“AMS asked if we could consider keeping the 480 as a peak period service, so that’s exactly what we’re doing,” Hodgson said. “In the future, the 480 will continue to be there during peak periods when people rely on it the most.”

AMS VP External Sally Lin believes this is a clear demonstration of AMS succeeding at its mandate to represent students.

“I think this is a very good example of what the AMS is able to do for its students in terms of transit advocacy,” said Lin. “Obviously the 480 is just one bus route and I think we can do so much more beyond that.”

She encouraged students to continue to communicate their concerns to AMS, so that the society can do a better job of advocating for students.

“It’s so important for students to tell us what they see as important and what they need and want because AMS is in a position where we’re really able to convey the student interest to decision-making bodies,” Lin said.

Students who rely on the 480 for their commute to and from UBC are happy with the decision.

Eman Gill travels from Surrey to UBC and already takes two buses during her two-hour commute. The third-year science and applied nursing student said that cancelling the 480 bus would have meant an even longer commute with more transfers.

“I think it would have made it longer, about 15 to 20 minutes longer with two or three more transfers,” Gill said. “Very inconvenient.

“I’m relieved because it saves my time and energy.”

Others, like second-year arts student Vivian Thieu, also expressed relief in being able to avoid taking the SkyTrain during peak periods.

“It’s crowded, especially during the times when school ends,” she said. “It takes forever to get on the platforms, and it’s hot and sweaty.”

Translink will now seek endorsement of the Southwest Area Transit Plan from local city councils in Richmond, Delta and Tsawwassen First Nation. It expects the plan to be finalized and implemented in early 2018.