Five Days for the Homeless raised awareness about youth homelessness 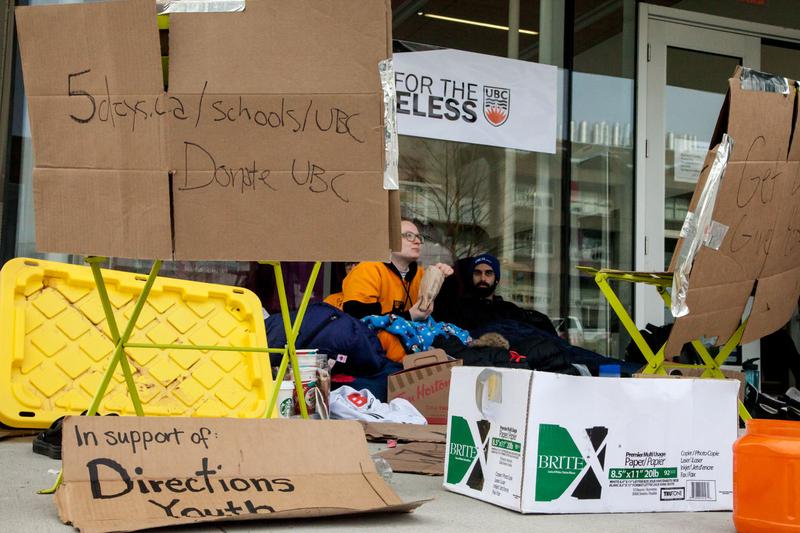 Participants in 5 Days for the Homeless were stationed outside the UBC Bookstore.

Five Days for the Homeless — an annual student-run event to raise awareness for youth homelessness — was held in front of UBC Bookstore from March 13-18.

Originally founded at the University of Alberta in 2005, the event is organized by the UBC Commerce Community Program to raise awareness and funds for youth at risk. This year, the campaign partnered with Directions Youth Services — a resource centre which provides food, shelter and programming for at-risk youth — to raise funds for their organization.

Participants spend five days and five nights without shelter, a disposable income, access to personal technologies or a change of clothes. The event helped participant Elaine Marshall, fourth-year kinesiology student, attempt to draw parallels between her experience from this event and those of homeless youth.

“Nothing will ever compare to what someone who is a homeless youth will go through, but we're just trying to develop some sort of understanding, some sort of empathy regarding youth homelessness. For me, a lot of it had to do with very little things like the fact that I had to really plan my day accordingly because I didn’t have access to look up when the bus was coming or what time it was. That was a huge struggle,” said Marshall.

Planning her day was not the only aspect of her life that Marshall found changed. “Going to work and feeling like I smelled. I feel like I was a little bit ostracized. I felt like I didn’t want to completely engage in the social environment in the workplace because I had all this stuff with me,” confessed Marshall.

The students’ efforts have noble motivations, but they should also be weary of trying to identify with marginalized groups, said Zachary Hyde, PhD student and sessional instructor from the department of sociology whose research focuses on the relationship between class and culture in urban capitalist societies.

Hyde also warns that this event addresses the immediate issue of homelessness, but not necessarily the structural problem of homelessness in Canada. “I think that asking for donations from private citizens to potentially mitigate the harms of homeless is important, but we also need to recognize that those conditions were created by larger structural changes,” said Hyde.

Third-year commerce student and director of Five Days Emma Sullivan agrees with Hyde. “I think one of the issues that we deal with and talk about, but can’t really fix through an immediate campaign like this, is the systemic issues of homelessness,” said Sullivan.

Hyde encourages students in the future to build connections with off-campus organizations led by low-income and homeless groups and to begin addressing the systemic issues of homelessness.

“We just need to remember that alongside actions like this, we should always be demanding action from all levels of government through collective protests and lobbying so that these types of actions are part of a larger movement to demand for housing for all people.”