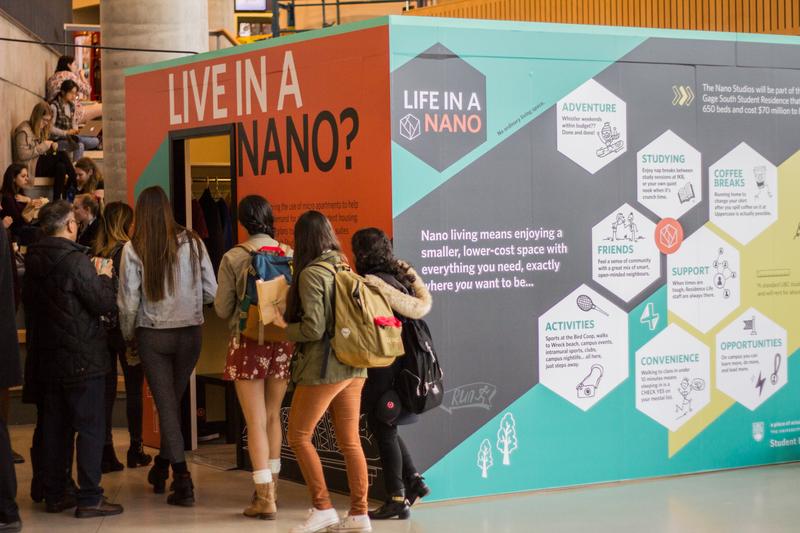 In the summer of 2019, 70 nano-units will be coming to UBC. They are part of the 651 housing units that will become available following the Gage South tower’s completion.

Nano-units are studios that fit “a bathroom, a kitchen, and a study/sleeping space” all into 140 square feet. The study and sleeping space are built into one, using a transformable bed with a table underneath.

For Andrew Parr, managing director of Student Housing and Hospitality Services (SHHS), these nano-units are considered a “trial” for a new growth model in campus housing. He seems optimistic about future students' living experiences with the units.

“We’re actually quite confident they will be well received,” said Parr. “They’re small but well-designed units. There’s a lot of extra amenities within the building that students will have access to, and it’s very close to the heart of campus.”

He also noted that there has been extensive consultation, both formally and anecdotally, about the nano-unit model.

A workshop on the nano-unit’s design was also held at the lead architect’s office, which included the SHHS’s staff, the design team and approximately 15 students. Parr believes that it was a “very helpful and student-inclusive process” because “a lot of the [students’ recommendations] were able to be implemented.”

In 2016, there was also a mock-up of the nano-unit on display in the Nest for six weeks, which was viewed by 30,000 people, according to Parr's estimate.

This sentiment was reflected in some of The Ubyssey’s street interviews on the topic. Others noted the potential smell problem from cooking in a contained space as well as the lack of storage. One student said that they would “rather commute from somewhere cheaper.”

Moving forward, Parr is “excited” about the nano-units’ opening and their role in addressing the demand for campus housing. He also linked their location in South Gage to a wider principle that UBC is “trying to adopt” – building at the centre of campus.

“That’s one of the things UBC wants to do as part of the campus plan is to create more mixed-use developments, where there are living environments, amenities for the entire campus community, classrooms, services and academic spaces all within the heart of campus,” he said. “It really does add a lot of vibrancy and heighten the experience for all students to have that kind of activity in the heart of campus.”