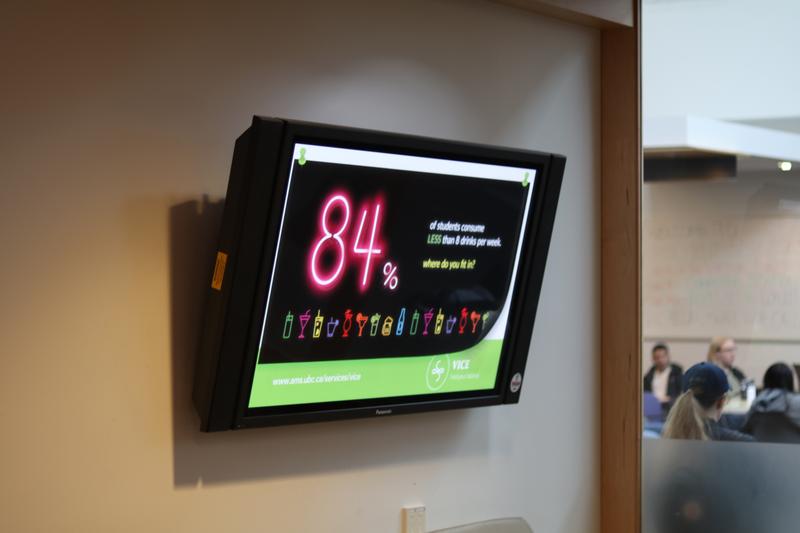 VICE was allowed to present just statistics on normative drinking rates, but only after confirming audience members were drinkers. Zubair Hirji

VICE — an AMS addiction support service — was required to censor their materials for Imagine Day on the basis of keeping the event “family-friendly,” according to multiple sources familiar with the service.

Despite this objective, they could not use certain terms like “drugs,” “substance” or “alcohol.” As a result, VICE had to tape over all mentions of these words on their banners and printing materials — making their outreach materials more or less nonsensical.

“Basically all printed materials they have included those words,” said an anonymous source close to VICE’s operations. “They had to cover up the words on their banners, making the message very vague and silly.”

They were also not allowed to display any drug or substance related materials, including naloxone kits that are used to revive people overdosing on opioids — especially fentanyl and heroin.

VICE Coordinator Alexander Dauncey was not able to comment.

Kim Kiloh, the director of the Centre for Student Involvement, stated that VICE’s materials were not the “best fit” for Imagine Day.

“Given the venue, our staff encouraged the VICE team to focus on advertising the service and to direct students to their office at the Nest for more personalized conversations about risk reduction,” Kiloh said.

The Main Event Regulations — which provides guidelines for boothing on Imagine Day — also states that “no alcohol or alcohol-related activities [are] permitted at the event.”

However, the anonymous source viewed this as a severe misreading of the service’s message and intentions.

“The whole point of being there is to be available to talk about any issues students might have,” they said. “Trying to not shy away from the conversation is literally the entire point of VICE.”

Still, VICE had to scale back the depth and range of their information presented at the event. Rather than leading students through normal activities involving substance control, they were allowed to present just statistics on normative drinking rates, but only after confirming audience members were drinkers.

The source indicated that these restrictions severely damaged the service’s ability to reach out to students.

“The only way that the UBC team allowed [VICE] to use those statistics is if they confirmed with the students that they were drinkers,” they said. “VICE normally doesn’t try to single people out and put them in boxes by asking if they drink ... we’re trying to de-stigmatize that kind of thing.”

They further added that UBC’s restrictions might have especially impacted new students.

“When people get to university, it’s a new time for them — they’re experimenting with many things,” said the source. “Maybe they’ve never tried alcohol or drugs before.

“It’s a bit like saying we can’t say the word SASC — Student Assault Support Centre — because we don’t want to make it seem like every student is having sex. We can’t just pretend that nobody here is using drugs or alcohol.”

The source also claimed that VICE received little support on this matter from the society — despite being a service within the AMS.

“It seems like from the AMS’s standpoint, they didn’t want to be too aggressive so I don’t think they took huge steps to help,” they said. “It seems like they didn’t make a big deal out of it, and they just pushed it to the side.”

When contacted, AMS President Alan Ehrenholz acknowledged The Ubyssey’s message, but has not yet provided a statement.