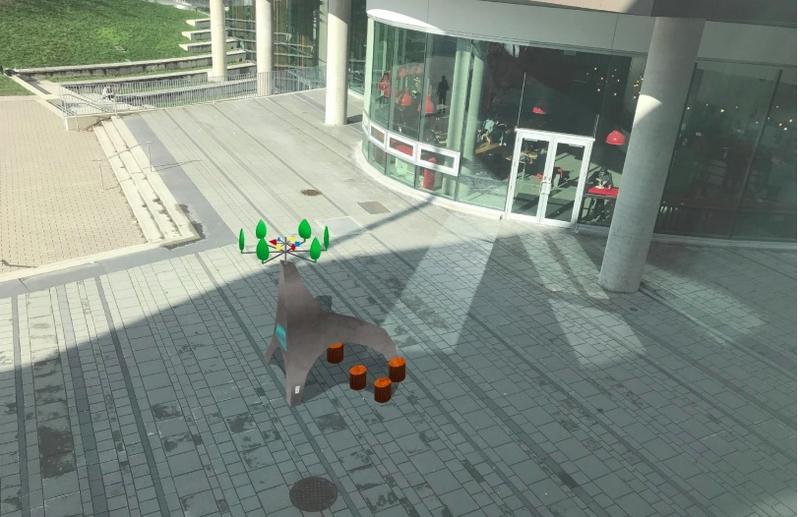 The capstone teams are currently working to perfect the headpiece, the part of the sculpture that will spin to generate electricity. Courtesy SEEDS

The AMS is installing a wind-powered “charging centre” between the Nest and the Robert H. Lee Alumni Centre to demonstrate the possibilities of renewable energy.

The ‘U’ Square Mobile will take advantage of the wind corridor created by the surrounding buildings to generate electricity and power for either a phone-charging station or an LED flatscreen information board.

The sculpture is based on the mobiles of Alexander Calder, an influential abstract sculptor from the early 20th century.

The idea originated with the AMS sustainability team, who then brought it to SEEDS, a program that works on over 100 projects a year to promote sustainability on campus. They also partnered with engineering capstone teams on projects to offer undergraduate students the opportunity to work on real-world problems and give back to UBC.

The capstone teams are currently working to perfect the headpiece, the part of the sculpture that will spin to generate electricity. 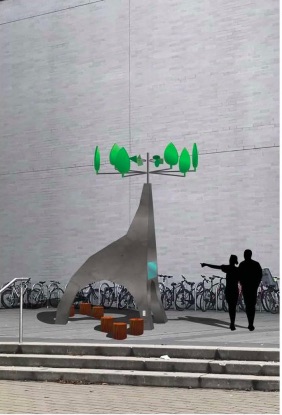 AMS designer Michael Kingsmill, who presented the project at the October 10 AMS Council meeting, said that headpiece may currently cause it to lose some of its generational capacity.

“What we have is a frictional loss through the gear train, and so we’re working on that to improve the efficiency of it,” he said.

Compounding the issue is the inconsistency of wind speeds in the space between the buildings. Oftentimes the wind won’t be strong enough to generate usable power.

“A lot of our problems stem from there not being enough wind, but there are going to be the days when there’s too much wind. You don’t want anything going wrong,” said Lauren Anderson, another engineering student working on the project.

For these reasons, the team has considered shifting away from their original goal of charging phones.

“Who wants to be standing out in the rain with their phone connected to a sculpture?” asked Anderson.

Instead they’re thinking of using the energy to power a screen that will display information and statistics on how the sculpture works and maybe even report the weather.

Some of the major concerns around the sculpture are safety and security.

To accommodate high wind speeds, the turbine will have a braking mechanism that will keep the headpiece from spinning too rapidly or erratically. The sculpture will also be 15 feet tall to make it impossible to climb the piece.

“One of the things about this piece is there can’t be any sort of opportunities for people to cling to and kind of hang off it. So we decided to streamline it,” said Kingsmill.

“It’s right in front of the Pit right? So Wednesday nights in the evening ... there’s some unaccountable things that we have to try and account for. That is one of the main reasons why it is so tall: safety,” said Andrew Clayton, whose capstone team worked on the project throughout the 2017/18 academic year.

The ‘U’ Square Mobile will cost slightly under $30,000, and it will be funded by the Sustainability Projects Fund and the AMS. Construction will begin in January, with a goal of completion by the end of February.

“I think it’s a good example of what a group of students can do to change the campus as part of their learning and give back to UBC and I really look forward to seeing the kind of conversations that arise,” said David Gill, a program and policy manager at SEEDS.