“We’re trying to provide a safe, comfortable and supportive environment on campus, and these policies are clear indications of our efforts for that.” Lua Presidio

The AMS has officially adopted the final version of its Sexual Violence Prevention and Respectful Community and Workplace Policy, which was formerly and more commonly know as SVPREP.

After receiving feedback on a draft earlier this year, the SVPREP working group, chaired by AMS President Chris Hakim, presented the completed policy in an August 21 Council meeting. The policy is set to go into effect by September 23.

“We’re trying to provide a safe, comfortable and supportive environment on campus, and these policies are clear indications of our efforts for that,” said Hakim in an interview with The Ubyssey.

Under SVPREP, if a survivor of sexual violence chooses to report the incident, the AMS must complete an investigation within 45 days of receiving the report unless there is a valid reason for extension. The findings of the investigation will be used to decide whether sexual violence has occurred on a balance of probabilities and corrective actions may be taken against the respondent accordingly.

Alternatively, a survivor may opt to disclose an incidence of sexual violence without initiating an investigation. Disclosures are entirely confidential, and data on their occurence rates help to inform sexual violence education initiatives and policy development on campus.

Non-AMS members, and people who are not affiliated with UBC may also report or disclose under SVPREP as long the respondent is a UBC staff member or student. Throughout all stages of the process, both complainants and respondents may access other AMS or UBC support services, such as the Sexual Assault Support Centre (SASC), the Sexual Violence Prevention and Response Office (SVPRO) or the Law Student’s Legal Advice Program.

“We really wanted to emphasize that both within the policies and the implementations, students and staff understood what the process looked like … [and] the resources ... available to support them,” said Hakim.

While individuals who have committed acts of sexual violence may face expulsion or suspension under Policy 131, UBC’s sexual misconduct policy, SVPREP now also allows the AMS to take other disciplinary actions against the offending party. Potential consequences include being banned from the Nest or AMS clubs, or having employment terminated. 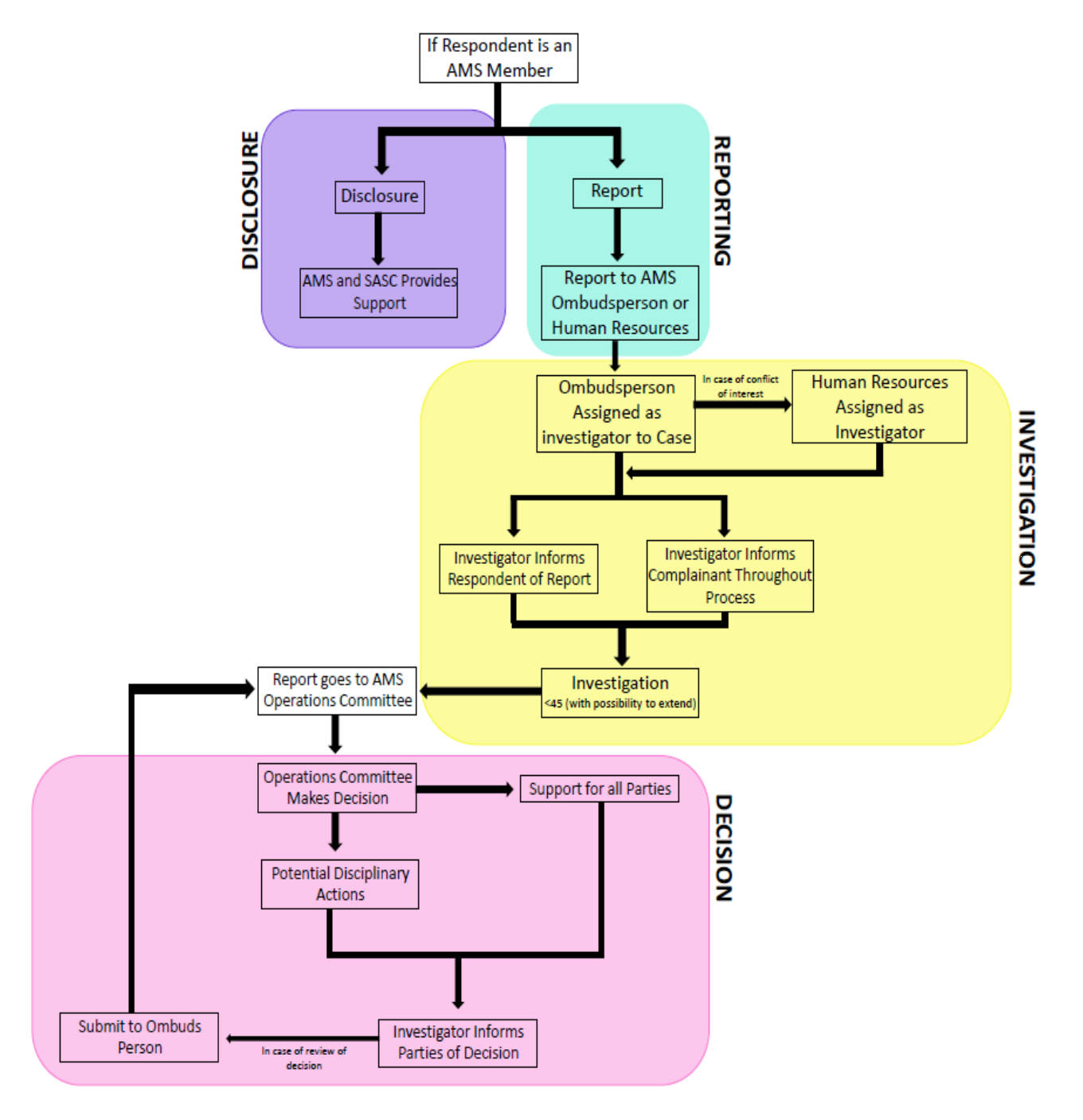 Under SVPREP, if a survivor of sexual violence chooses to report the incident, the AMS must complete an investigation within 45 days of receiving the report unless there is a valid reason for extension. Courtesy AMS

“SVPREP fills a jurisdiction gap where UBC’s policies would not provide effective remedies,” Annette Angell, manager of SASC and a member of the SVPREP working group, said in a statement to The Ubyssey.

A representative of SASC also sat on the SVPREP working group to help inform the development of the policy. According to Angell, SASC “advocated for measures that would respect survivors’ confidentiality, agency and choice.” “SVPREP ensures that survivors have multiple options, depending on the outcome they want from reporting,” she added.

The latter half of the policy is a replacement of the previous Respectful Environment Policy, which was created in 2014 to meet provincial government mandates. According to Hakim, the process was rushed and didn’t allow the AMS to “properly capture what the community wanted to see in the policy.”

The policy was revised with consultation from the UBC community and retitled as the “Respectful Community and Workplace Policy” to avoid being misinterpreted as one tackling climate justice.

While the Respectful Community and Workplace Policy encourages informal conflict resolution, it also outlines a procedure for reporting offending behaviour. Again, the AMS may take disciplinary actions against the offending individual similar to those in Policy I-17.

After consulting with the community, the AMS included a flowchart for Policy I-17 in order to make the procedural expectations and structures more accessible to staff and students. Additionally, summary guides that provide more concise descriptions of both policies are available within the document. 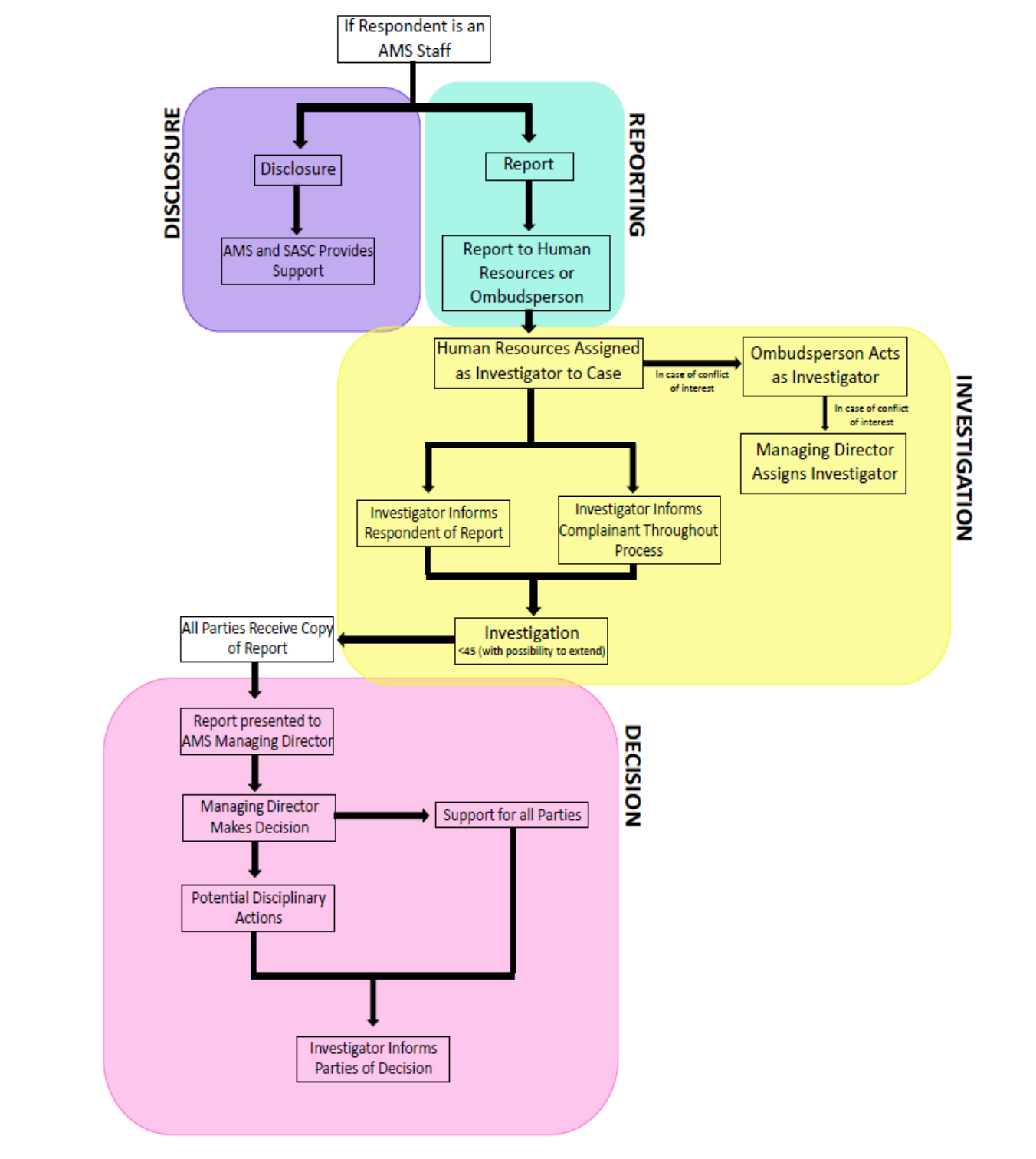 After consulting with the community, the AMS included a flowchart for Policy I-17 in order to make the procedural expectations and structures more accessible to staff and students. Courtesy AMS

As outlined in the policy, all individuals relevant to the enforcement of SVPREP, such as those conducting or evaluating investigations, will be receiving procedural fairness and trauma-informed approaches training prior to the effective date of the policy.

A representative from SASC will also be sitting on the working group for SVPREP’s implementation.

According to Evans, the AMS will be disseminating information to students through marketing efforts such as the clubs newsletter, their social media channels and at mandatory club executive orientations that happen in both September and March.

As mandated by the policy, SVPREP will be reviewed for its effectiveness by the AMS Council in September 2020.

“These are landmark policies for the community, because they provide clear and trauma-informed procedures,” said Hakim. “Over time ... folks will feel more comfortable accessing these services and that way survivors will be provided the supports that they’re looking for.”