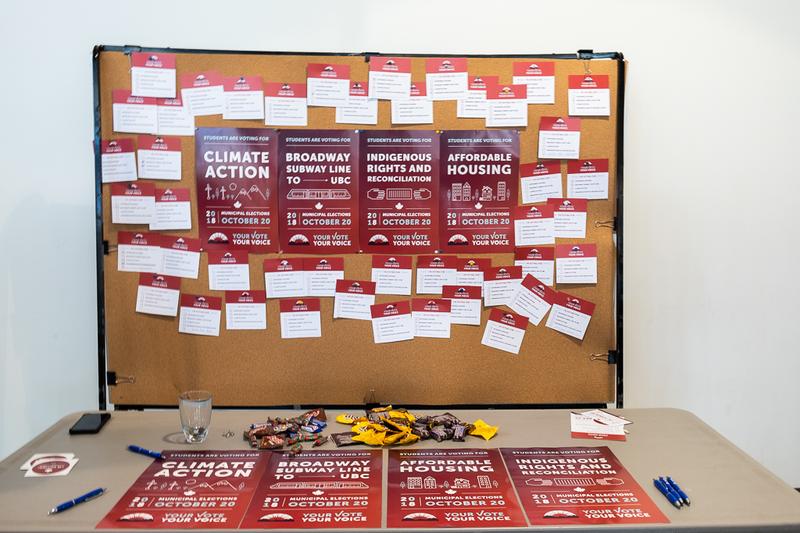 The AMS’ campaign also centres around a number of issues directly relevant to students. Alex Nguyen

In the days leading up to the Vancouver municipal elections, the AMS and student groups are making a “big push” to encourage student voter turnout.

With the goal of reaching at least 1,000 students, the AMS is holding a booth in the Nest from October 17 to 19 to educate students on the elections and voting. The society is promoting the campaign through social media, posters and Facebook events, while encouraging “positive peer pressure” and a buddy voting system between students.

A voting location will also be hosted in the Nest for the school board trustee race.

“The AMS recognizes how important partnership and peer encouragement is so we want to use that to spread the word to as many communities as possible to get students out voting with each other and hold each other accountable,” wrote AMS VP External Affairs Cristina Ilnitchi in an email to The Ubyssey.

The campaign also centres around a number of issues directly relevant to students, such as Indigenous rights and reconciliation, transit expansion, affordable housing and climate action.

“We hope to make municipal politics more understandable for students by highlighting the issues that they will be affected by,” Ilnitchi said.

The AMS is also partnering with other student groups to promote civic engagement.

Last month, the AMS partnered with the UBC Debate Society and the GSS to host a mayoral candidate debate on campus which featured ProVancouver’s David Chen, independent candidate Shauna Sylvester and Yes! Vancouver’s Hector Bremner in a debate that focused on housing, transportation and public safety.

More recently, the society partnered with the Social Justice Centre (SJC) to design posters and host events like the “B-Line and Bike to the Ballots” to bring students to the polls during the advanced voting period.

“We hope to facilitate student participation in this aspect of the democratic process, and to hold the AMS accountable to their goal of increasing student voter turnout,” said SJC Co-Chair Gabby Doebeli in a message to The Ubyssey.

The centre itself has been active both in raising awareness about the elections and campaigning for the Coalition of Progressive Electors (COPE), a progressive municipal party. 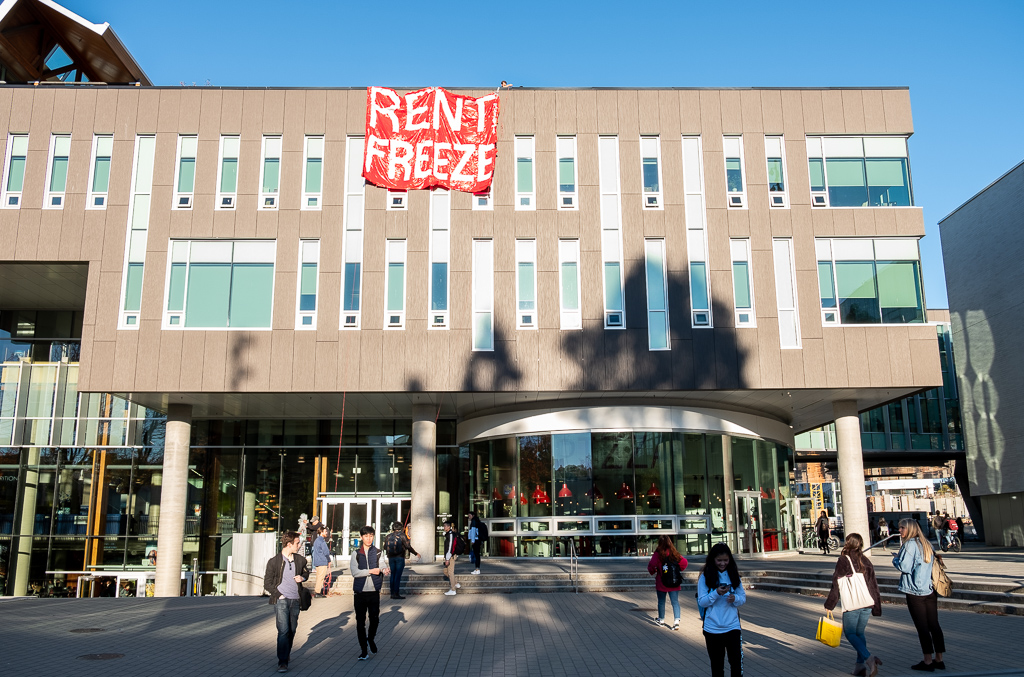 In particular, it staged two demonstrations by hanging a large banner that read “RENT FREEZE,” over the roof of the Nest — first on Imagine Day, and then again on October 16.

“ … [W]e hope our efforts can increase historically low youth voter turnout [—] local elections are often not viewed as very important, but they are very significant,” she said.

But some SJC members have expressed disappointment with the AMS partnership.

“Lately I've been disappointed by the AMS’ apparent disinterest in this work by their absence at 2 events the Social Justice Centre held ‘in partnership’ with them,” SJC member Dheeraj Waran in a message to The Ubyssey. “This feels like self-serving lip service and was quite unprofessional I thought, especially considering the ongoing issue of low voter turnout in AMS elections as well.”

Ilnitchi responded that the AMS has been actively working on its outreach campaign. Regarding the society’s attendance at events, she said the society “upheld” the logistical commitments it agreed to with the SJC.

“We did not make a commitment regarding on-the-ground representation the day of the events as we knew we could not be certain that an AMS representative could attend each event,” she said.

Ilnitchi then ended the response by refocusing the conversation on educating students about the municipal elections and increasing their engagement.

“We prefer to focus on the positives and hope to bring the attention to what is important during this time …” she said.