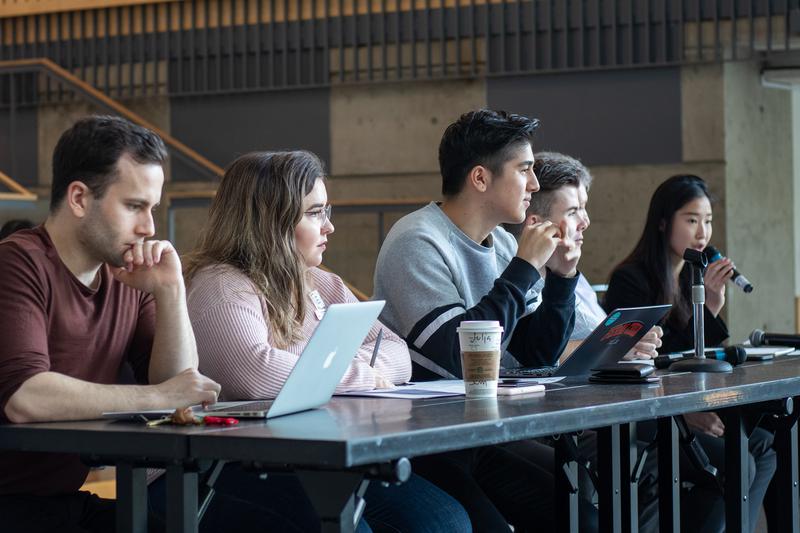 The AMS is required by its bylaws to hold a general meeting every year in order to update members about the AMS’s budget, services and executive portfolios. File Zubair Hirji

The AMS is working to improve the advertising and turnout of its annual general meeting (AGM).

After the 2019 AGM in October drew fewer than a dozen seats, the AMS president’s office has prepared a transition report that will standardize procedure and address concerns raised by councillors.

The AMS is required by its bylaws to hold a general meeting every year in order to update members about the AMS’s budget, services and executive portfolios. But at an October 23 council meeting, councillors criticized the AGM’s poor organization and advertisement, which in turn led to poor engagement.

AMS President Chris Hakim said the bad planning can be partly attributed to a lack of institutional knowledge about how the meeting should be run.

“We noticed that there can be some difficulty with new executives coming into their position not knowing what previous years had done specifically towards organizing,” said Hakim.

“Never having organized an AGM and then trying to learn from scratch … can be very time consuming.”

Reaching quorum — or 1 per cent (over 500 people) of the AMS’s membership in the UBC Vancouver student body — has only been achieved once in the past 40 years, preventing the addition of motions or questions to the agenda that can be voted on by attendees, as stipulated by code.

Katherine Westerlund, AMS representative and VP finance of the Engineering Undergraduate Society, said the AMS puts in considerable effort into the execution of the event, instead pointing to low engagement in most UBC student constituencies’ AGMs as evidence for student apathy and non-prioritization being the primary causes behind low turnout.

Westerlund described the concept of AGMs as “dated and potentially unfit for student organizations like the AMS.”

“Even if you were somehow able to motivate a quorate number of people to come out, that group would then have an immense amount of power, [meaning that] commuter students, students in heavy course loads, students taking online classes and students who work during the day (just to name a few groups) would all be just under-represented at such a meeting,” she said.

Addressing concerns regarding minimal promotion of the event, Hakim said the organization of the AGM without standardized procedure each year diverts labour from marketing efforts. He hopes the transition report will change this.

“There were no guidelines in the past of organizing the AGM. Responsibilities were dispersed amongst not just executives but also staff members. This transition report will definitely provide an opportunity to save time and put it towards the engagement aspects of the AGM to increase attendance,” said Hakim.

Due to the lack of a clear timeline and designated roles and responsibilities for every executive and staff member, Hakim called running the AGM “reinventing the wheel.”

“So with all the planning process clearly outlined in a report, executives would be allowed more time to spend in attracting more students to come out for the AGM,” he said.