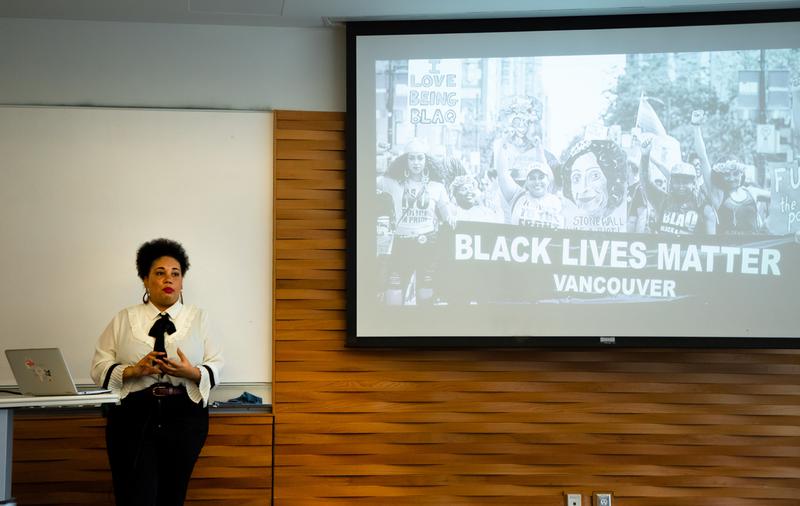 Blain, who is of Jamaican descent and originally from London, moved to Vancouver in 2012 and later co-founded Black Lives Matter Vancouver. Jane Diokpo

In honour of Black History month, Cicely Blain held their talk “The Politics of Black Queer Liberation,” at the Allard School of Law on Wednesday. The event was the latest in Allard's Centre for Feminist Legal Studies (CFLS) lecture series.

Blain, who is of Jamaican descent and originally from London, moved to Vancouver in 2012 and later co-founded Black Lives Matter Vancouver. They also run Cicely Blain Consulting, a company dedicated to diversity and inclusivity.

“I'm not a business-minded person. I make enough money to survive, but I run everything based on my passion and what I believe in, what I want to speak about, what I want to share. I just believe in changing the culture of the organization so it's more inclusive,” Blain later said in an interview with The Ubyssey.

In their lecture, Blain discussed Black Queer identity and how colonialism has influenced the spread of Queerphobia in Black communities. They also highlighted strategies to rewind the damage that anti-Blackness has done and in turn improve the way Queer identities are viewed within the community.

“Cecily did a great job addressing a lot of the issues that Black people deal with, especially Queer folks in the Black community,” she said. “[They] also did a good job giving historical context about non-binary genders in Black communities around the world.”

Historically, both male and female, but especially the latter, have been objectified and hypersexualized by white society, explained Blain. They gave the example of Sarah Baartman, nicknamed “Hottentot Venus,” who in the eighteenth century was kidnapped from her South African Tribe to be exhibited nude around Europe for her ‘large buttocks.’

Blain also unpacked the stigma of how Black women are seen as aggressive and tough, which permits their unfair treatment compared to how non-Black women are treated.

Blain explained that in many Black communities around the world, especially in Africa, Queer identities have always existed, from the Mbuti from Central Africa who doesn’t give children genders until after puberty to the transgender women of the Ambo tribe in Angola who were thought to be diviners of a supreme spirit.

But due to most people’s tendency to view the world through a “white lens” these cases have largely been ignored, and colonialism in many of these countries increased the stigma surrounding Queerness in Black communities.

The Pride movement is “white-washed,” argued Blain. Queerness is stigmatized within Black communities because it’s usually discussed from the standpoint of caucasian and other non-Black communities. The result is that Black Queer voices are often left unheard, leading to an “erasure of their legacy.”

But even within Black communities and movements like Black Lives Matter, violence against Queer Black people is largely ignored.

To confirm their point, Blain did an exercise with members of the audience. They displayed two columns displaying the names of Black people who have experienced violence and asked the audience to sit if they didn’t know one of the names.

Most people knew most of the names in the first column, which was made up of cisgendered Black males. The names in the other column belonging to Black transgender women were largely unknown.

Yet a lot of mainstream trends associated with Queerness were popularized by the Black Queer community, such as drag. Blain noted that appropriating pieces of a culture without giving recognition can feel exploitative.

Overall, Blain said they were pleased with how the event went In their interview with The Ubyssey.

“I saw a lot of people look as if a light bulb went off in their heads. So I think people learned at least one new thing today, and that's what matters to me.”