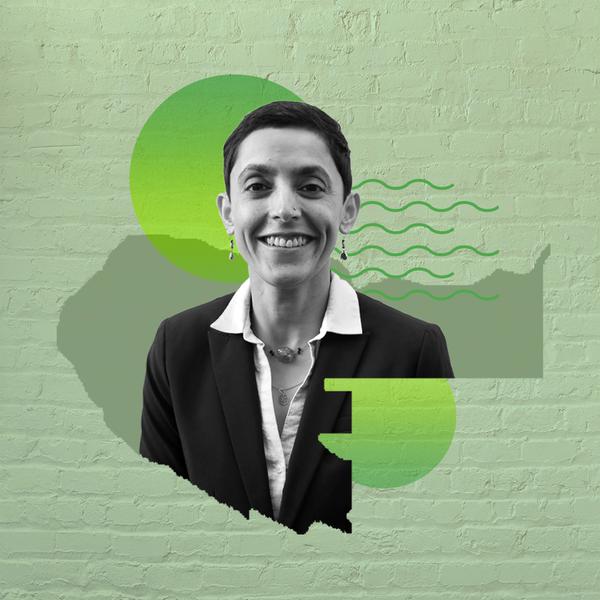 Singh criticized Eby and the NDP as not doing enough for the climate. Mahin E. Alam

Having completed a PhD from the UBC Faculty of Forestry on energy and climate policy, she said “she couldn’t take the back seat anymore.”

“As a frustrated scientist who just could not sit back and see our planet being destroyed, it was time for me to get into politics,” Singh said. “ … I decided to run as a concerned citizen, as a climate scientist, as a person of colour, immigrant woman and queer — these voices have often been ignored in government.”

She criticized Eby and the NDP for not doing enough for the climate, something the two clashed on in debate. However, her climate policy contrasted with Eby’s experience as the incumbent.

“I feel Eby and his party [have] been making false promises to just placate the public to make them think they are doing something for the climate, when they have gone ahead and voted on increasing fossil fuel subsidies and spending by 79 per cent over the Liberals,” a figure The Ubyssey could not verify.

However, according to a 2019 report from Environmental Defence Canada, the NDP government gave $830 million in subsidies to the oil and gas industries.

In contrast, Singh said that the first thing she would do if elected is eliminate the fossil fuel subsidy. Singh was most likely referring to BC’s Deep-Well Royalty Program, which is responsible for a major portion of fossil fuel subsidies. The BC Liberals created the program in 2003 while in power, providing royalty credits when producers drill deep wells.

However, Singh recognized that Eby supported the 20 per cent speculation tax and addressed money laundering in the province as attorney general.

Singh said she was ready to collaborate across party lines.

“I think that what we need as a government is working together — supporting ideas that are great across parties, and then raising issues where you don’t think the ideas are great.”

On student issues, Singh said she has the perspective of being a UBC student. She spoke on the difficulty of finding student housing on campus, saying she struggled with housing affordability and availability while finishing her PhD as an international student.

“A lot of us undergrads and graduate students, we end up living in Point Grey … Kitsilano. And it is expensive,” Singh said. “I know. I was spending 80 per cent of my stipend on housing.”

She stressed the need for more affordable housing on campus, and spoke about the Green Party’s merit-based approach to supporting renters. The approach would give renters who spend larger percentages of their income on rent more support than renters who spend a smaller amount.

Asked whether she would support a universal basic income, Singh vouched for providing supplemental money to low-income earners under an income threshold. This would ensure all BC residents earn above a minimum income level, rather than a standard amount being distributed to every BC resident regardless of income.

On mental health, she supported the Green Party’s platform of expanding mental health coverage under the provincial Medical Services Plan.

“Anybody who’s gone to counselling for depression or other mental health issues that a lot of students, undergrads, graduate students we all face, while we are in a university in an academic environment — we need longer care,” said Singh.

A major theme of Singh’s campaign is the need to “listen to experts.”

“Instead of placating some corporation or some sect of a population, we need to believe in evidence-based decision making,” she said. “And that's why I’m running: to bring more science and justice into government.”