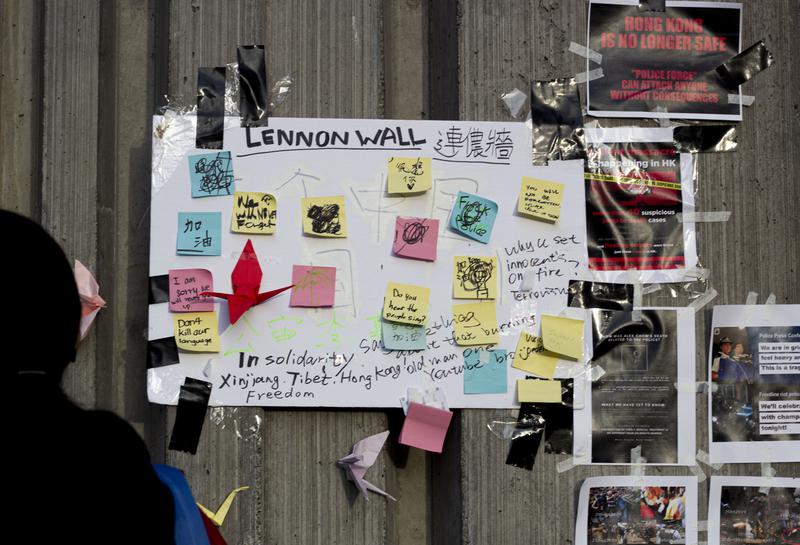 “The larger issue is about police brutality and the self-expanding power of the police and the human rights abuse and personal security problems that come along with it.” Elizabeth Wang

On Wednesday, UBC the Enlightenment of Hong Kong (EHK) publicly screened a compilation of news clips and footage centering on police violence during the Hong Kong protests.

The hour-long video was played on loop in the square outside the Nest from 2 to 7 p.m. Planned a month in advance, EHK scheduled the showing to coincide with the Hong Kong Police’s storming of the Chinese University of Hong Kong that started on Monday.

The UBC community is also speaking out against on-campus violence in Hong Kong in a petition organized by Vancouver Hong Kong Political Activists.

“We think the problem Hong Kong is facing is no longer confined to the extradition amendment bill, said Davin Wong, a third-year political science student on exchange from the University of Hong Kong and spokesperson for EHK.

“The larger issue is about police brutality and the self-expanding power of the police and the human rights abuse and personal security problems that come along with it.”

The video was graphic, showing scenes of overt police brutality against screaming protesters. Their cries were amplified through speakers and could be heard throughout University Commons.

“It’s hard to watch even for us,” said Phoenix Au, a first-year science student and creator of the video.

“But we believe it cannot be avoided. The truth is brutal and has to be presented because if you dress everything nicely, if you sugarcoat it, people won’t know what’s going on.”

But things got off to a rocky start. The club had audio issues when setting up and it was too bright outside for the projected footage to show clearly.

Not counting the EHK members, fewer than 10 students at a time lingered around the screen. This disappointed Jimmy Leung, a third-year economics student and one of the leaders of EHK.

“We prepared for this for so long. But it’s like no people really care about Hong Kong, and Hong Kong[’s] situation is so serious now. Some people are dead and some people are so injured that they’re in the hospital. It seems like the situation will be worse and worse in the future,” said Leung.

“It’s important — I want [UBC students] to care about it.” 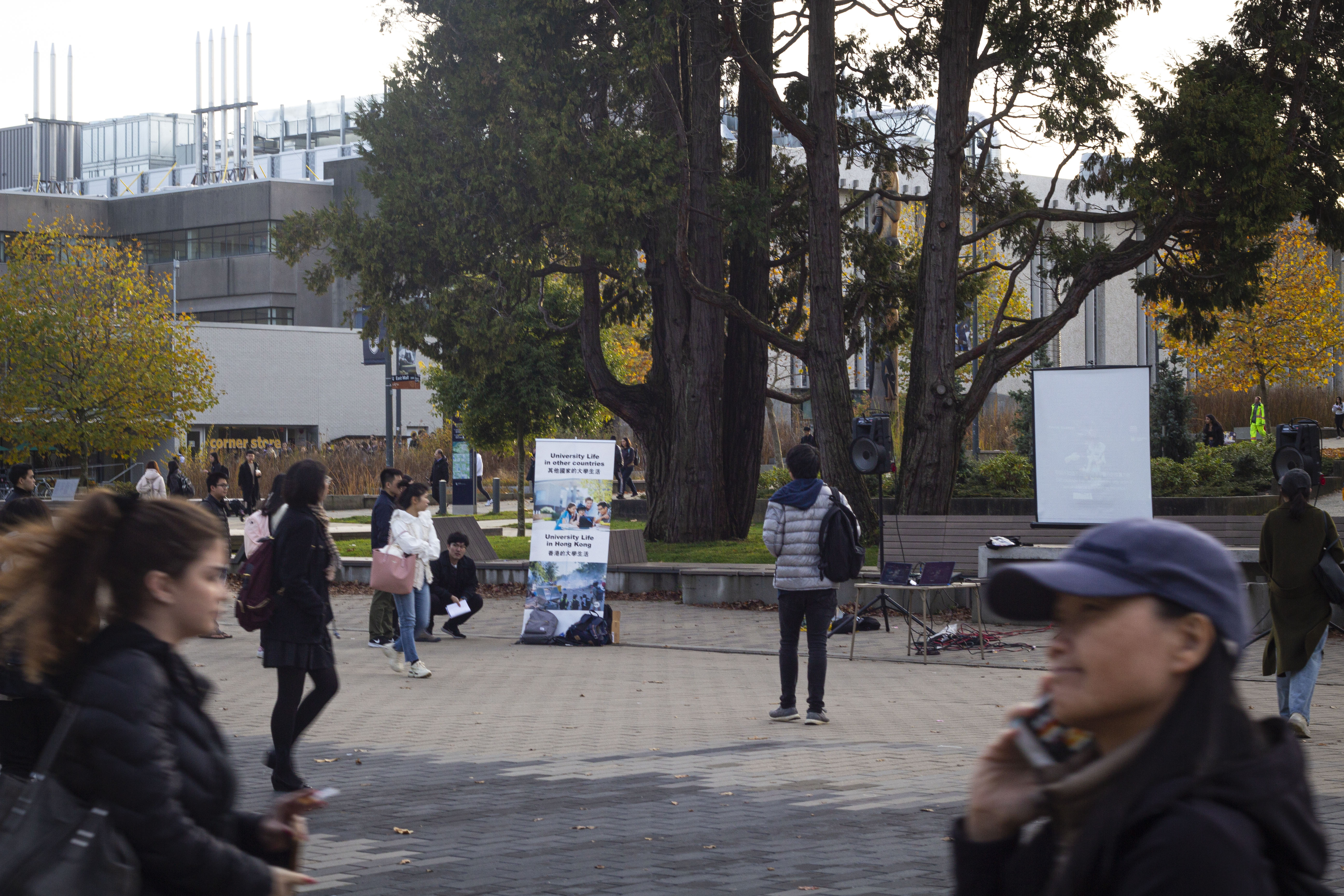 Not counting the EHK members, fewer than ten students at a time lingered around the screen. Elizabeth Wang

By around 4:30 p.m., the sky darkened and the projection became visible. The improved clarity drew larger crowds and the screening was extended to 7 p.m. from the original end time of 5 p.m.

Across the square, a Lennon Wall was made in memory of two Hong Kongers, Alex Chow and Chan Yin-Lam. Chow died during the protests in Hong Kong after falling from a ledge on November 4. Reports say he was trying to escape tear gas.

The circumstances of Yin-Lam’s death are unclear, though the 15-year-old’s body was found naked and floating in the sea on September 22. While Yin-Lam’s mother claimed she died by suicide, some speculate the police had a hand in the matter, as Yin-Lam was involved with the protests.

Both deaths have sparked outrage and criticism towards the Hong Kong Police.

The wall, which was set up days ago, featured banners that read “Rest in peace” in Chinese. They were recently vandalized and covered by opposing messages, some of which read “I hope you don’t find peace after you die.” 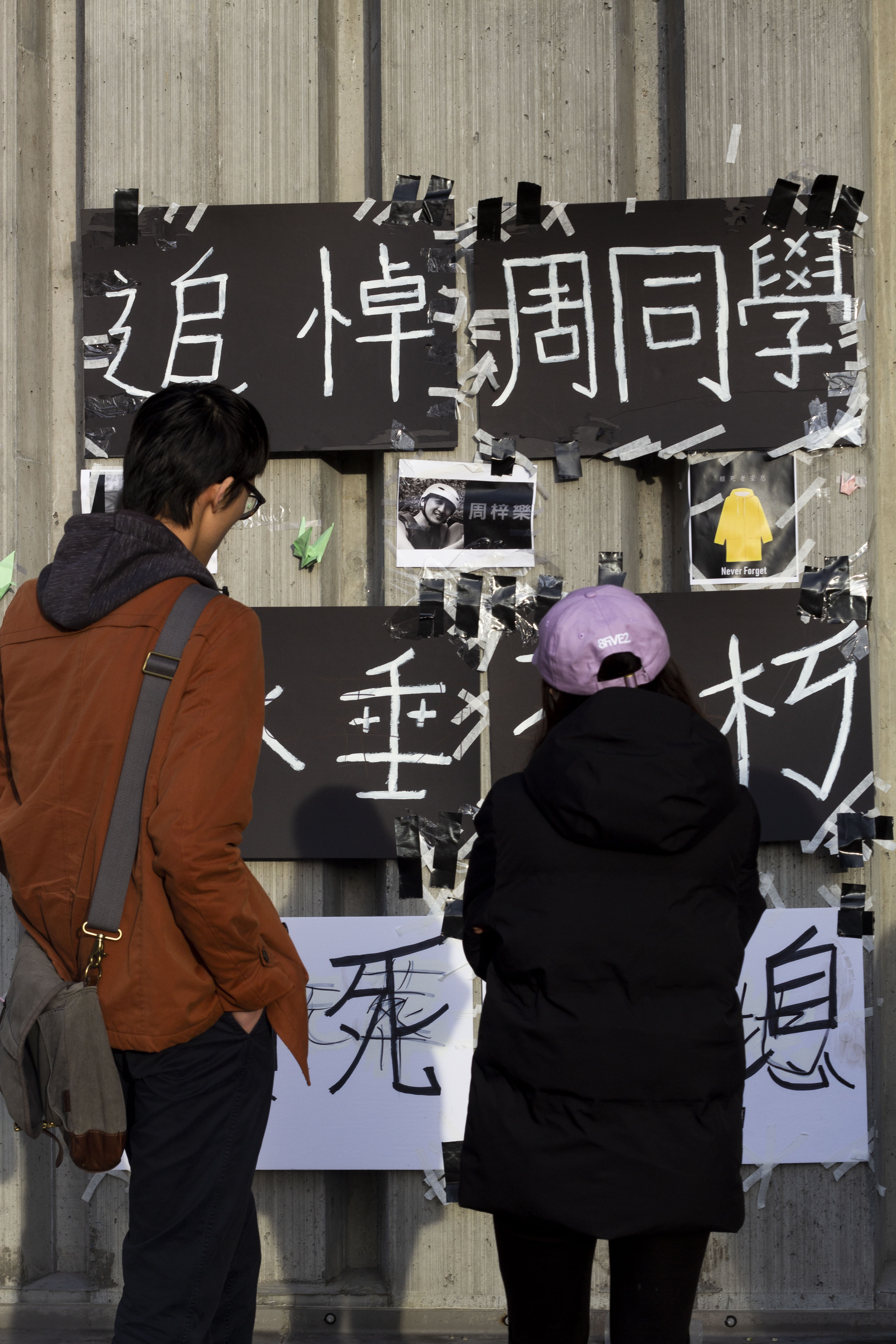 A Lennon Wall was made in memory of two Hong Kongers, Alex Chow and Chan Yin-Lam. Elizabeth Wang

“This is very disrespectful. No matter who died, you can’t say that,” said Cherry Tsui, a student at BCIT and member of EHK.

“If [students] feel triggered or impacted by the video, by the graphics or sound effects of the video, that would be great ... because this is what’s actually happening,” said Wong.

“... We want every UBC student to know the impact of the terrible things that are happening in Hong Kong.”