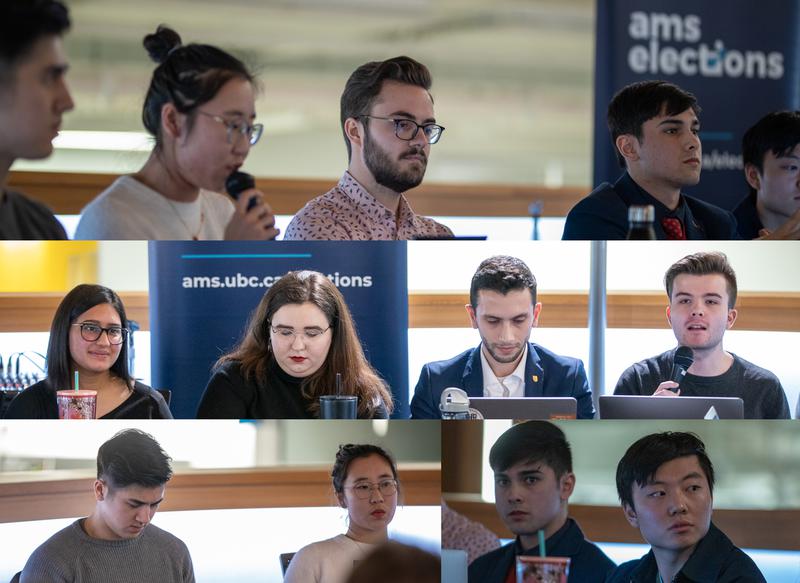 The gap between the first-timers and the incumbents remained a point of tension throughout the night. Zubair Hirji

In their final debate, Senate candidates addressed issues of equity, diversity and what can reasonably be accomplished within the Senate.

But the knowledge gap between the first-timers and the incumbents remained a point of tension throughout the night.

“When you were first running for the Senate … how did you deal with [its] complexity? Because more than half of the stage do not have Senate experience and you guys seem to hold it against them,” said one audience member, addressing the incumbents during the open question period.

Holmes said he didn’t hold inexperience against candidates, but there was no excuse for a lack of knowledge.

“If you don’t do your research, I'll always hold that against you,” he said. “As much as possible during these debates I try to correct people’s misunderstandings in the Senate. But that’s never supposed to be against the individual who might not understand this very complex body.”

Holmes clarified that first-time candidates were able to attend student Senate meetings and engage with senators, adding that their failure to make themselves known could speak to a lack of accessibility on the current student senators’ parts.

“I have the utmost respect for anyone who is brave enough to stand up here,” Burnham said. “But I will say that there's a difference between being an outsider and not doing your homework.”

While the Senate may be best known for academic concession, reading break discussions and Policy 73 which provides accommodations for disabled students, they influence all aspects of academic policy. But not everyone was on the same page about what the scope of their role is, a point that more experienced incumbents were quick to jump on.

“We all have these great ideas and platforms, but in reality each student senator sits on maybe one or two committees, three if you’re really, really dedicated,” said Burnham. “... A lot of these promises are ultimately promises that no one up here can guarantee, including me.”

Much of the night’s discussion focused on equity, diversity and inclusion. Candidates shared how they would work to support Indigenous students and faculty as senators.

Wang did not answer directly, except to say that more consultation should be done.

Borno, Bhangu and Kong pressed for an Indigenous seat on the Senate. Evans stressed the need for Indigenous-centred curriculum, an opinion shared by Borno and Kong.

Burnham cautioned that the Curriculum Committee often functions as a “rubber-stamp,” approving proposals that are mostly finalized.

“The actual ability of student senators sitting on these committees to encourage and promote the growth of these [initiatives] is limited to none,” she said.

She mentioned the Awards Committee as one of these “rubber-stamp” committees, but Evans said he would like to sit on it in order to continue to push for summer session credits to be included towards awards considerations.

“There’s a reason that we are creating a plan and we should be looking to operationalize that as much as possible within the Senate,” he said.

Holmes added that a better way for the Curriculum Committee to progress would be revising submission requirements for curriculum packages so that they can more easily be amended to include Truth and Reconciliation calls to action.

Bellinger and Kong were also called out for their misleading comments.

Bellinger questioned why UBC only maintained a formal relationship with the Musqueam nation when “there are more Native peoples on this land.” Burnham pointed out that the UBC campus is on solely unceded Musqueam territory.

Meanwhile, Kong said First Nations and Endangered Languages courses within Linguistics no longer existed and that he wished to revive it. Burnham clarified that the program exists as part of the Institute for Critical Indigenous Studies.

“We don’t know anything about what the land is actually about and the meaning of those signs around us,” he said. He added that having these signs without the education to understand the full importance is a failure.

Later, audience member Will Shelling — a Black Caucus and Black Student Union member, associate VP external for the AMS and policy and research assistant for the UBC Equity and Inclusion Office — added that anti-Blackness dialogue was noticeably missing from the debate. He asked the candidates how they would support the retention of Black students, staff and faculty while on Senate.

Most candidates agreed that talking to Black students, the Black Students Union and the newly appointed Black Caucus would be vital steps.

Wang mentioned that the discussion needs to go beyond talking about how to incentivize and create action but failed to provide any specific actions she would take.

Holmes and Bhangu made similar points.

“If we want to retain people on campus, we need to offer them opportunities,” said Holmes

Speaking of the importance of education, Kong specifically mentioned an anthropology course with a unit on the history of Timbuktu as one of the most influential classes he took last semester. He said there needs to be more promotion of courses that talk about African history and Black civil rights movements.

But Burnham accused Kong of framing anti-Blackness as a thing of the past.

“So to quickly address an alarming comment I heard from my colleague over here … it’s really important that we recognize the severe anti-Black racism on this campus,” said Burnham.

“It was Black history month this month. How many of you actually showed up and did anything?”

A major question that snagged several newcomers and allowed incumbents to flash their expertise was the implementation of the Inclusion Action Plan (IAP). The far-reaching strategy drafted back in 2018 centred on transforming student demographics to become more inclusive.

Burnham was the most knowledgeable on the topic, having chaired the Senate Ad-Hoc Committee on Academic Diversity and Inclusion. She highlighted her previous consultation work with the other Senate committees about implementing the plan.

“I really want to say that one of the most important things here is the funding and resources,” she said.

“There should be more budget proposals, and orientations and onboarding and coaching for the Senate secretariat because so much of the work of the Inclusion Action Plan falls upon the[ir] feet.”

For the IAP as well as the Indigenous Strategic Plan, Hakim said that he would use his influence as chair of the Budget Subcommittee to make sure they were properly resourced, stressing that financial goals are reflective of student priorities.

“That doesn't just mean simply shouting into the void,” he added. “But properly coordinating the views that comes from the Budget Committee.”

More specifically, he mentioned that he would make sure recruitment initiatives have adequate funding in order to hire more diverse students, staff and faculty.

Another candidate who stood out was Borno, who had otherwise sidestepped many of the other questions by agreeing with his fellow candidates. Here, he leveraged both his experience as a visible minority as well as his experience serving as president of the AMS resource group Colour Connected Against Racism.

“I have a lot of insider’s insight on the minority community on campus and what they need and what they want. So my experience would be an asset,” he said.

But he didn’t provide concrete actions.

Kong once again missed the mark. He spoke about partnerships with universities in other countries, without touching on the Inclusion Action Plan.

Newcomers Bhangu and Bellinger agreed with Burnham, noting that they believed there wasn’t much to add past her points.

“Julia did a great job with the high-level review and she’s been a huge part of this process. But there are so many specific things that we can actually talk about within the IEP [including] more inclusive and accessible governance,” he said.

In the midst of clashing perspectives, Burnham reminded her competitors of the importance of their roles.

“As a student senator, you have legitimacy within the university and the space and the power that you take on is important,” said Burnham.

“It’s important for every student senator that you elect to acknowledge that and show up for community.”