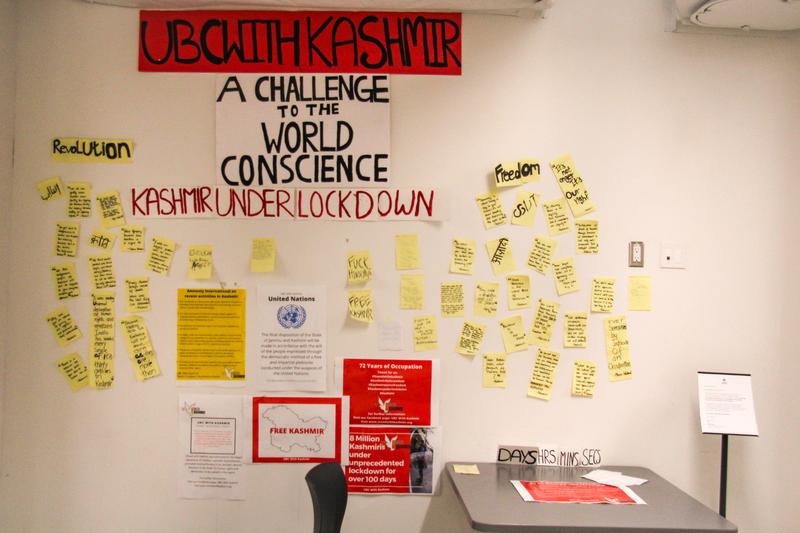 The group’s Lennon Wall has a curfew clock counting the number of days under lockdown along with messages in solidarity with Kashmir. Elizabeth Wang

As images and reports of police brutality against protestors across India who are pushing back against the Citizen Amendment Act (CAA) circulate the news, student-led group UBC Stand With Kashmir has put up a Lennon Wall in the lower level of the Life Building to bring awareness to campus.

On August 5, 2019, Article 370 — which grants Jammu and Kashmir partial autonomy as an Indian state — was revoked by Prime Minister Narendra Modi’s government. Since then, citizens have been arrested and communication lines have been cut.

The group’s Lennon Wall has a curfew clock counting the number of days under lockdown, along with messages in solidarity with Kashmir.

A Kashmiri student part of the UBC Stand With Kashmir group, who asked to remain anonymous to protect her family living in the region, said the group hoped to use the wall to connect with students at UBC.

“We wanted to connect more [with the students] on [the] ground and not virtually,” she said. “We thought it would be better if we could have a wall where people could really connect and read it through instead of just a social media post.”

A letter in front of the wall signed by AMS VP Administration Cole Evans explains that the installation was been granted permission to remain at the location. The letter further states that unauthorized tampering with the wall may result in disciplinary action including suspension from the Nest under AMS Policy I-7.

“Individuals of all political perspectives are encouraged to post on the wall with sticky notes,” reads the letter.

Prerna Gupta, a member of UBC Stand With Kashmir, said news related to Kashmir has often been swept under the rug.

“[The curfew clock] is supposed to act as a bomb to somebody’s conscience,” he said.

Alifiyah Sohail, another member of the UBC Stand With Kashmir group added that there is the constant imperative to remind people of the harsh realities of Kashmir.

“Whenever any crisis happens in the world, we forget. We react towards it in an urgent way in the very beginning and then we forget about it, which is the nature of human beings,” Sohail said.

The Kashmiri student also acknowledged her privilege of living abroad and having a voice that people in Kashmir have been denied.

“This is the bare minimum I can do as a Kashmiri. I do feel a sense of responsibility to let people know that there are people called Kashmiris and they have the right to speak up and you have a duty to let them speak as human beings,” she said.

“I think it is something that occupation does to you, it robs you of your rights to education, opportunities, dreaming or living a normal life.”

Going forward, Gupta said he encourages UBC students to “keep researching, create awareness, get people together, organize more events, implore world leaders to take a stand use whatever little influence to have to educate.”

“Human rights violations have been going on for so many years. It is the most militarized zone in the world and it continues to violate human rights and nobody in the international community is talking about it,” he said.