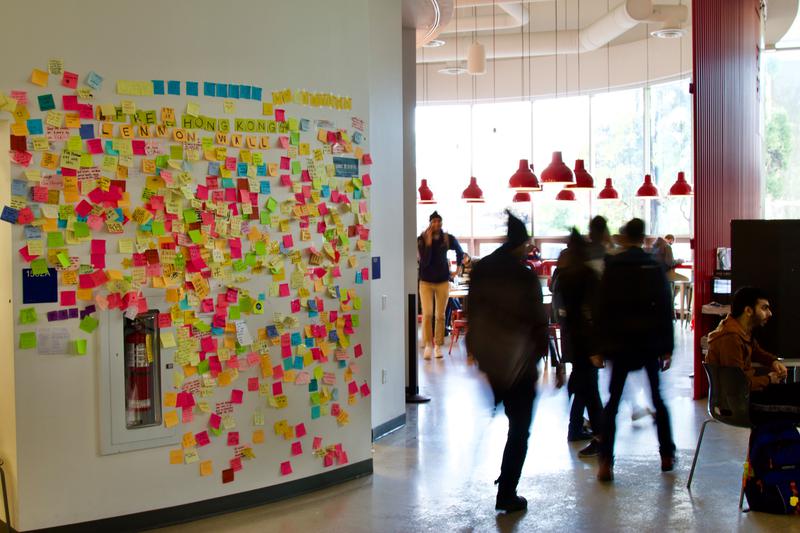 The first Lennon Walls at UBC were erected amidst protests against the 2019 Hong Kong Extradition Bill. Diego Lozano

The Hong Kong Lennon Wall installation at the AMS Nest was vandalized and removed in its entirety.

In a written statement issued to The Ubyssey, AMS VP Administration Cole Evans confirmed that the Lennon Wall — consisting of messages regarding Chinese influence on Hong Kong from the UBC community, both for and against — was taken down by an individual without permission from the AMS.

“After an initial investigation, it was determined that at 06:30hrs on January 29th, an individual entered the AMS Nest without authorization and proceeded to vandalize the Lennon Wall installation located in the Nest by removing it in its entirety,” the statement reads.

The first Lennon Walls at UBC were erected amidst protests against the 2019 Hong Kong Extradition Bill. The bill would have amended Fugitive Offenders Ordinance to allow the Chinese authorities to file extradition requests to Hong Kong, Macau and Taiwan. The bill was since withdrawn by Hong Kong Chief Executive Carrie Lam in early September, but protests in the region have continued in demand of just police practices and universal suffrage.

Since they started on campus, Lennon Walls have been subject to contrasting opinions and controversies. As The Ubyssey reported in September 2019, students continued to erect Lennon Walls even after they were subject to vandalization. Eventually, the AMS allowed a wall to be posted on their premises next to PieR2 so that it could be protected.

Phoenix Au-Yeung, the public relations officer at UBC Enlightenment of Hong Kong EHK (EHK), was “shocked” when she first heard about the wall being taken down.

“I wasn’t expecting this to happen.”

She said people who are aware of the turn of events in Hong Kong and those who respect freedom of expression should be “equally alarmed by this action.”

“… everybody in the UBC community contributed to it and every single message is from a different individual, so no [one has] the authority to take it down,” Au-Yeng said.

“It is unfortunate that they resorted to this action to suppress what others have to say while neglecting the fact that Canada and UBC [have] freedom of speech.”

On Chinese National Day, EHK held a rally in support of Hong Kong protesters that was met by a Pro-China counter-protest. The altercation drew hundreds of students and UBC community members to each side, singing and chanting over each other.

A Chinese-Canadian student, who preferred to remain anonymous due to fear of backlash, said the AMS’s Lennon Wall is just as divisive.

For him, the problem with the wall is the fact that the AMS seems to be endorsing a certain side.

“To put it into perspective, I even thought that it was fine for the anti-communist Hong Kong protesters to yell anti-China slogans on Chinese National Day since it was their freedom of speech … However, having an AMS sanctioned Lennon Wall was something I wasn't a big fan of.”

He believed the wall was a sign of “Hong Kong radicals,” alienating his Chinese peers with “racist” slogans. According to him, such slogans didn’t just target the government, but also targeted the people from Mainland China.

“In the name ‘freedom of speech’ once again. I feel like it’s sometimes … just a dog whistle for fascism and racism.”

Au-Yeung thinks that whoever vandalized the wall took advantage of the “slowed-down momentum of the movement.” She was quick to share her experiences on a recent trip to Hong Kong.

“I actually came back from Hong Kong this Christmas and there were a lot of protests going on,” she said.“Now the protests might have subsided a bit ... but I believe that [the people of] Hong Kong have still been holding on to the objective and our goal throughout the past month.”

Evans has assured that the AMS is further investigating this act of vandalism.

“The AMS will continue to investigate the situation and will be in touch with UBC EHK on what next steps might look like moving forward,” he wrote.