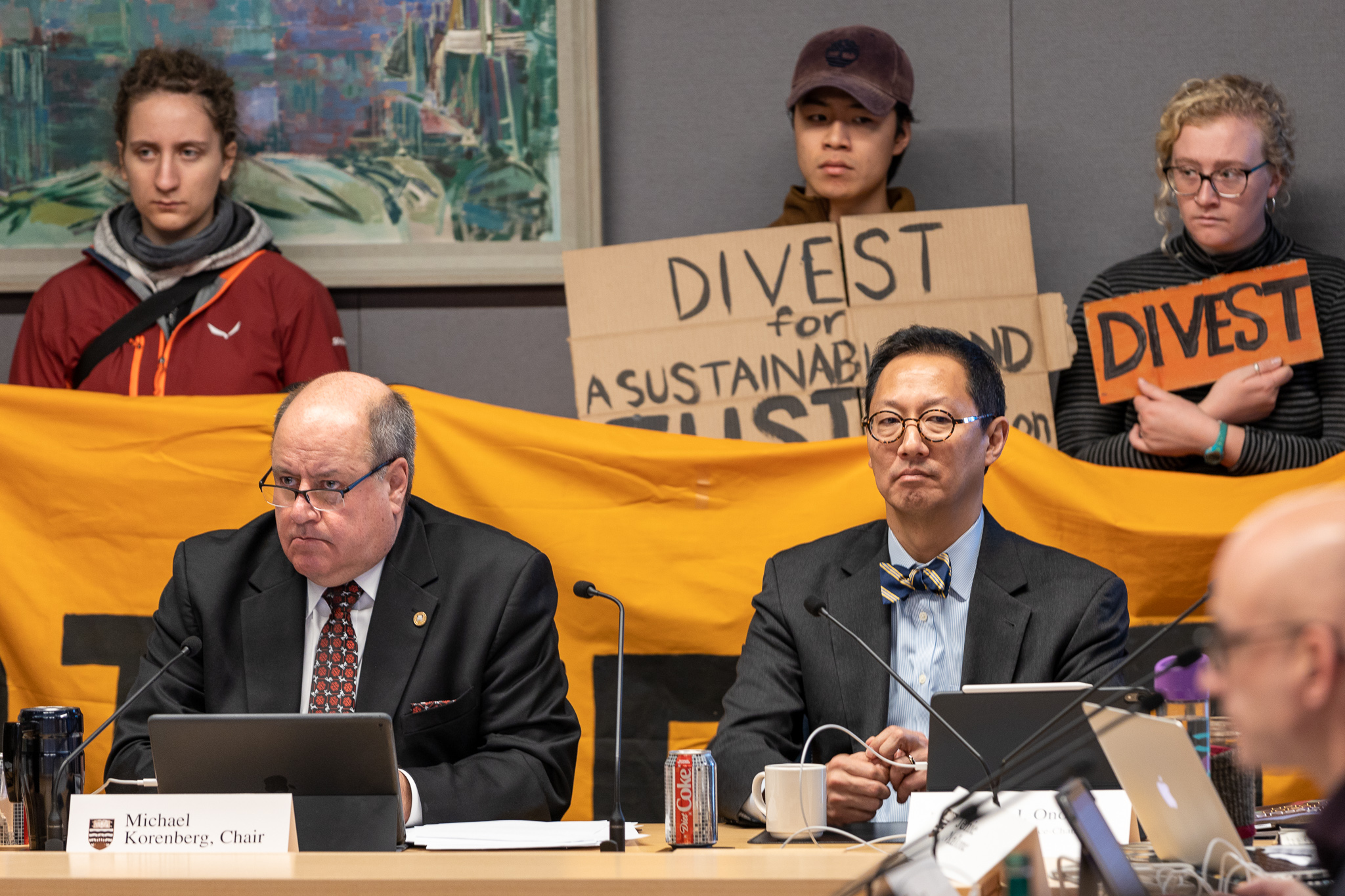 President Ono, Board of Governors declare a climate emergency

Santa Ono declared, and the Board of Governors endorsed, a climate emergency. After, the Board voted in favour of committing to the principle of divestment from fossil fuels.

With pressure from student groups mounting over the first half of the academic year, President Santa Ono declared a climate emergency at the Board of Governors (BoG) meeting on Thursday morning.

The Board unanimously voted to endorse the statement.

Ono said the university undertook a collaborative process with student groups and individuals to draft the climate emergency response.

“I cannot stress enough of my gratitude for the passion of these groups and the individuals that have worked with me in thinking about how UBC in the future can respond to the current climate crisis,” said Ono.

The statement formally recognizes the threats the climate crisis poses to the livelihoods of people around the world and that UBC’s role as a public research and teaching institution is to take on a leadership role in providing solutions.

“[A]ddressing the climate crisis is critical to the University’s key functions of research, learning and engagement as UBC strives to prepare students for their futures and conduct leading research on pressing societal issues,” reads the statement.

In his announcement, Ono also said he would launch a “climate emergency community engagement process” that will consist of internal conversations among faculty, student and administrative groups, open town hall events and a consultation website where the community can submit ideas.

Ono also plans to establish the Climate Emergency Advisory Committee to oversee the consultation and produce a public report by late spring 2020, fulfilling an ask from the open letter.

The letter also acknowledged the impacts the climate crisis has had on Indigenous peoples and marginalized communities. Ono said their voices must be central in the consultation process.

“The process must exemplify dignity, justice and equity. In doing so, we will create intentional space for UBC’s marginalized communities on campus, and center their voices and the development of recommendations,” he said.

UBCC350 member Michelle Marcus was pleased the statement incorporated aspects of the climate crisis that are not usually considered, including the need to transition the economy to alternative energy and the disproportionate impacts the climate crisis has on Indigenous communities and marginalized groups.

The motion to establish the committee also included dissolving of the Endowment Responsible Investment Policy Committee (ERIP) as the new standing committee will take on ERIP’s roles.

“I want to reiterate that the actions of the student groups, faculty and staff, that your passion, your engagement with me is greatly appreciated,” said Ono.

“You have moved this institution and it is, I think, a textbook example of how activism can really help change what an institution does.”

Later in the meeting, the Board approved two motions that will commence divestment from fossil fuels after years of little movement.

The first motion will transfer the $381 million Trek Endowment pool — made up of the university's own, unrestricted monies — into the Sustainable Futures Pool (SFP) composed of low-carbon, fossil fuel-free funds.

The second motion requests the administration “explore” legal and financial considerations with divesting the remainder of its Main Endowment Pool, which comprises about $1.33 billion in charitable gifts bound by donor agreements and the Trustee Act. So far, the timeline has not indicated how long the move will take.

Members from UBCC350 and XR UBC were present at the BoG meeting to continue their call for full divestment. The groups previously protested at the ERIP committee meeting on November 22.

Right after the ERIP committee finished their business, a group of XR UBC Students interrupted the meeting to deliver a statement of their own. They reiterated their threat that if the Board does not commit to full divestiture by the end of the year, they will go on a hunger strike.

Several governors, including BoG Chair Michael Korenberg, responded by saying the Board supports the goal of divestment, but simply need more time to do it properly.

Marcus said the motions represented “a huge victory,” for both the climate and divestment movements on campus.

“[The motions] wouldn't have happened without years of student and faculty pressure. These motions today were a direct result of the divestment movement and relentless organizing by students and faculty over the past six years,” said Marcus.

“As UBCC350, we are very, very proud of the work that we've done to compel the board to vote to partially divest and explore full divestment.”