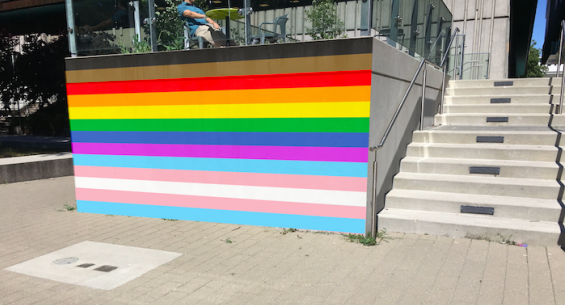 UBC’s Equity and Inclusion office has made changes to the upcoming Pride installation after reviewing feedback from the campus community. Screenshot via UBC.ca

UBC’s Equity and Inclusion office has made changes to the upcoming Pride installation, after reviewing feedback from the campus community. The timeline for the installation’s unveiling is still set for early September.

In June, the office announced the creation of the “LBGQ and Trans Pride installation” in order to to acknowledge and celebrate marginalized communities on campus. It surveyed university community members on three possible design options for the installation, which would each see the LBGQ and Transgender Pride flags displayed onto a surface outside of the Nest.

Since then, the office has proposed a final location for the installation. Following recommendations and criticisms from the community, it has also added black and brown stripes to represent the communities’ members of colours, as well as changed the installation’s name to be the “UBC Pride Installation.”

A final location and additional stripes

The proposed location of the installation has been narrowed down to the walls by the stairs of the Nest and the Student Life Building. This location that’s partly based on the second option in the original survey, which received the most votes from respondents.

The design now includes additional black and brown stripes, which are meant to acknowledge the presence of people of colour within LGBTQ+ communities.

The chosen location, however, does not have enough steps to accommodate the addition of the new stripes. As a result, the installation will now wrap around the other wall by the stairs of the Nest instead of being painted onto the stairs. 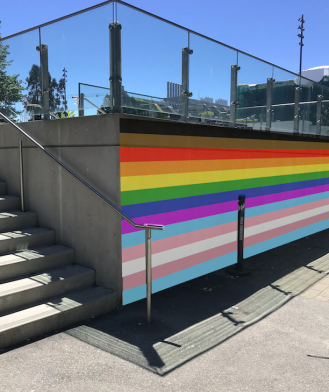 The installation will now wrap around the other wall by the stairs of the Nest instead of being painted onto the stairs to include the new stripes. Screenshot via UBC.ca

“We had tried to be representative of our entire community in using the Trans flag and the Pride flag,” said Sara-Jane Finlay, associate vice-president equity and inclusion.

“What we heard was that some members of the community didn’t feel that it was as inclusive of people of colour. This is a design — the inclusion of the brown and the black — that we see appearing more and more incorporated into the Pride flag, and it makes it much more inclusive.”

The name of the project has also been changed from the “LGBQ and Trans Pride installation” to the “UBC Pride Installation.”

This decision was made in response to criticisms from UBC community members such as the Pride Collective, who were “strongly against” the original name for its separation of transgender individuals from the LBGTQ+ acronym.

“This [new] name more clearly signals the celebratory sentiments around this installation, the pride we take in all forms of sexual and gender diversity, the actual intent of the installation, and our own efforts to celebrate the LGBT2SQIA+ community here at UBC,” said Marko Pajalic, UBC Equity and Inclusion communications manager, in a written statement to The Ubyssey.

“While the initial title aimed to signal at a glance that there will be two flags installed, it caused some confusion as to the intent behind it, and we hope this version helps demonstrate that at UBC we fully welcome and celebrate gender and sexual diversity of all.”

Pride Collective member Shoshana Messinger said the Pride Collective is “very happy” that the Equity and Inclusion office listened to their critique of the installation’s name, as well as the overall feedback about the additional black and brown stripes.

“As some gay and lesbian identities are becoming more accepted into the mainstream, it is vital that we continue to centre Two Spirit, BIPOC, ace, intersex, and trans members in the LGBTQIA2S+ community,” Messinger said in a written statement to The Ubyssey.

“The name change does a better job of this than the proposed original, although it is still rather ambiguous.”

“We hope that [Equity and Inclusion] continues to listen to the feedback of the communities that it seeks to represent going forward and see the art installation amendments as a positive step,” said Messinger.