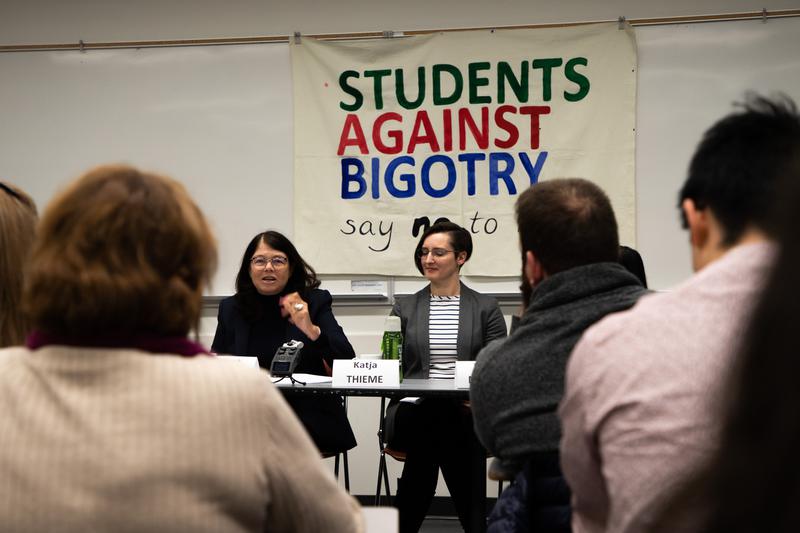 The panel’s discussion mostly centred around the review of the 1976 statement. Lisa Basil

As tensions mount among students, faculty and university around controversial events, the UBC Vancouver Senate has created a task-force to review the university’s 1976 Statement on academic freedom.

In an effort to deconstruct the concept of academic freedom, the UBC Students Against Bigotry (SAB) hosted a panel called “Academic Freedom: Under Threat at UBC?” that invited the university community to consider many of the questions underlying this debate.

The four panelists took turns weighing in on what academic freedom meant to them within their respective disciplines, addressing both the philosophy and legality of what this freedom means in a setting like UBC and whether it comes with limits.

The big underlying question was where the university should draw the line regarding the presence of controversial speakers on campus — if one should even be drawn at all.

Packing the room, the event’s turnout comprised many members of the UBC community, as well as members of SAB, the UBC Free Speech Club (FSC) and UBC Students for Freedom of Expression (SFE) — three groups who have butted heads over invited speakers and interpretations of academic freedom.

Anticipating the controversial nature of the discussion, the moderator set strict ground rules with the acknowledgement that anyone who did not adhere to them would be asked to leave.

Two Campus Security members were also present throughout the event.

The panel’s discussion mostly centred around the review of the 1976 statement.

SAB and others demanded that UBC not give a platform to speakers who promote xenophobic or anti-2SLGBTQIA+ sentiments, given the harm that may arise.

The group also argued that the problem lies not in the statement itself, but in its implementation. They notably differentiated “free speech” from “academic freedom” — particularly in cases where a speaker is not directly affiliated with the university.

“You may be surprised to learn that SAB actually opposes this revision to this 1976 statement.” Turcotte-Summers said in his opening remarks. “We feel that it’s unnecessary. The university already has the tools to prevent neo-Nazis from speaking on our campus.”

He explained that academic freedom is always constrained by its setting. In other words, speakers can’t just lecture on anything — they are expected to base their talks on truth and research.

“Freedom of expression does not support the notion that anyone is allowed to speak anywhere,” Young said. “There are always the unavoidable lines you have to draw.”

In contrast, the FSC argued that the university must allow speakers to contribute to discourse on campus, no matter how contentious the topic.

They also disagree with SAB’s proposals of vetting potential speakers, saying that by doing so, the university would be creating an ideological inequality of who gets to speak on campus.

“[SAB is] trying to impose their narrative of reality … and they want to push those alternative viewpoints out to sea,” said philosophy student Franz Kurtzke.

The panelists pushed back against this argument, noting the need to be aware and inclusive of marginalized groups who have been historically barred from universities’ intellectual discussions.

“We need to consider the role of historical exclusion to the debate,” said Mawani.

In practice, UBC has had a tough time figuring out the answer to these questions.

Last summer, the Vancouver Pride Parade revoked the university’s invitation after it allowed anti-SOGI speaker Jenn Smith’s talk on campus to go forward. It also received a groundswell of criticisms and distrust from members of 2SLGBTQIA+ communities on campus.

Earlier this year, UBC cancelled a talk by Andy Ngo, an editor-at-large of right-wing media website The Post Millenial, citing safety concerns. As the event's host, the FSC responded to the cancellation by filling a lawsuit against the university with The Justice Centre for Constitutional Freedoms.

Turcotte-Summers said that UBC often struggles to draw the line between “academic freedom” and “freedom of speech” in these types of events, muddling their responses to controversial speakers.

This article was corrected to attribute the final quote to Samuel Rocha rather than Jonathan Turcotte-Summers and note the UBC Students for Freedom of Expression's presence at the event.