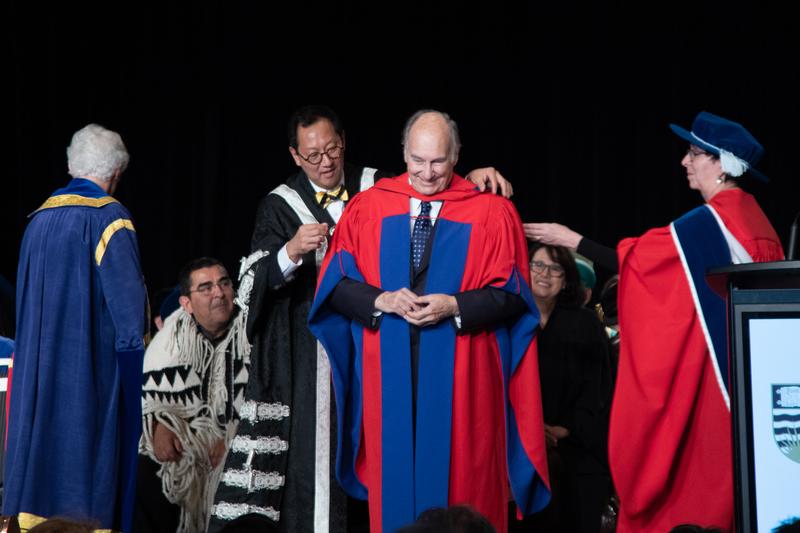 At an unprecedented joint ceremony in downtown Vancouver, UBC and Simon Fraser University (SFU) awarded an honourary doctorate of laws from both schools to the Aga Khan.

The ceremony held on October 19 recognized the 49th hereditary Imam of the Shia Ismaili Muslims for his philanthropic contributions to both schools.

“It takes someone of the stature of the Aga Khan to get two universities to figure out how to bring their convocations together,” said SFU President and Vice-Chancellor Andrew Petter.

“The Aga Khan is well known for his commitment to reconciliation, but to reconcile two convocation ceremonies is really an accomplishment.”

“It’s especially meaningful that we’re doing it together as SFU and UBC,” said UBC President and Vice-Chancellor Santa Ono. “We’re honouring an incredible individual who has given so much to help individuals around the world and to help with education and to make sure that individuals who are less privileged are taken care of.” 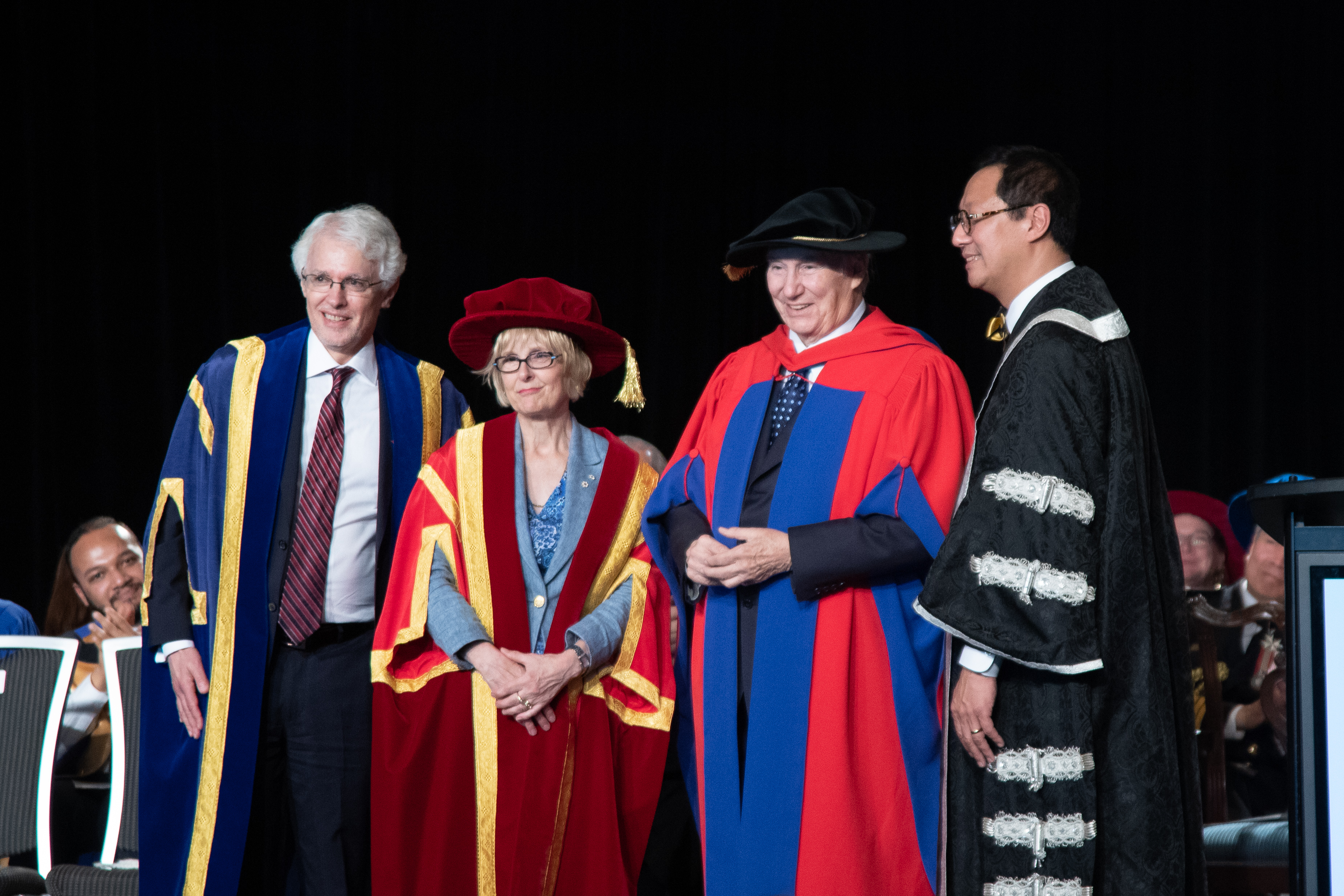 “It’s especially meaningful that we’re doing it together as SFU and UBC.” Zubair Hirji

UBC is currently partnering with the University of Central Asia (UCA) — whose chancellor is the Aga Khan — to create a bachelor of science program in earth and environmental sciences at UCA’s campus in Khorog, Tajikistan.

“We learn from the universities in Vancouver and Canada, but also their faculty and students visit us, work with us, do research with us and bring their ideas back to Canada,” said Rosul.

“Asia and Africa in particular are where the central gravity of the world is moving — and those populations are not only growing but also they’re innovating, they’re coming up with new ideas in resource-limited settings which I think others can learn from as well.” 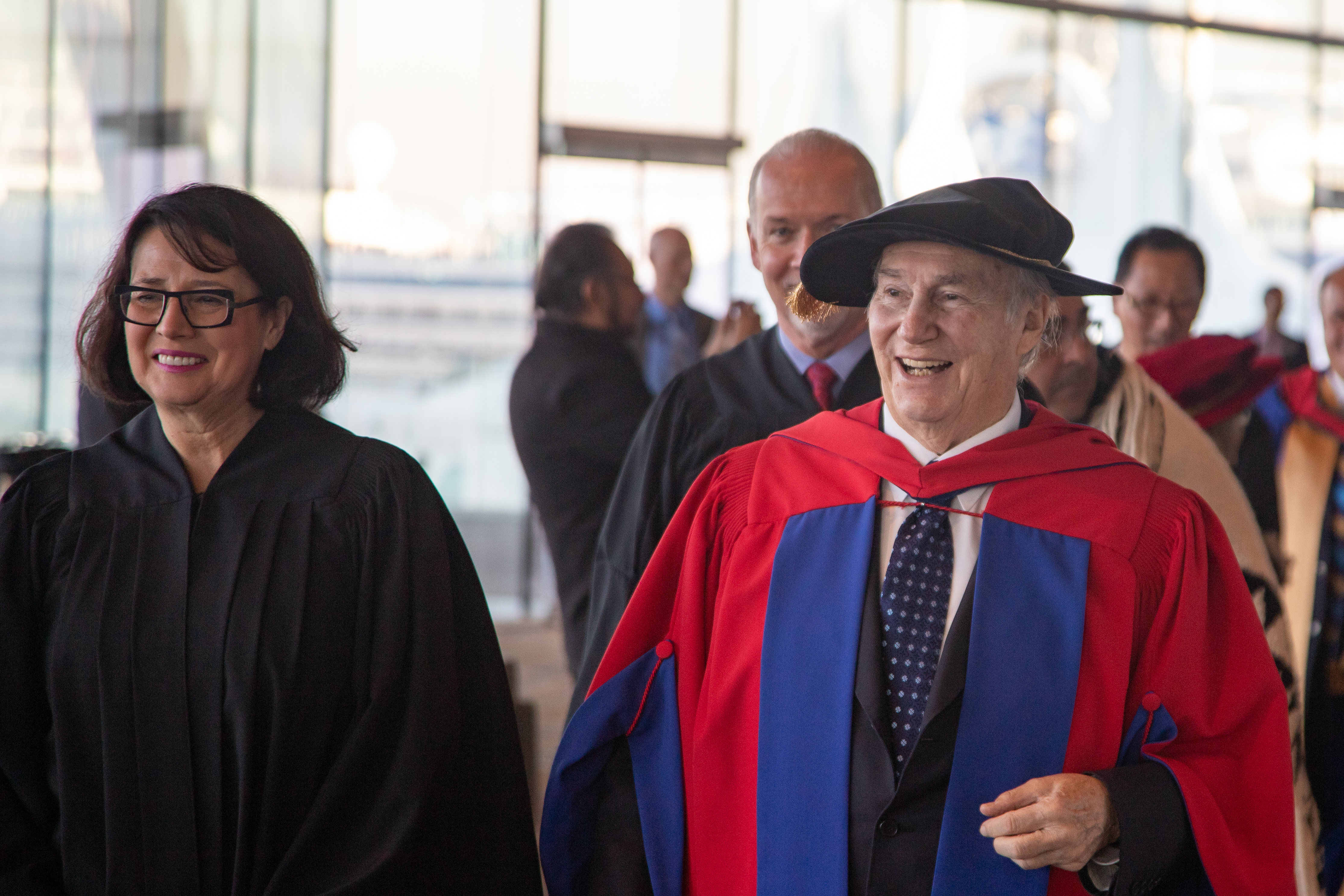 The convocation reflected the unique nature of the partnerships being celebrated. SFU’s pipe band led the processional and students from both universities partnered to perform a dance and music presentation.

Members of the Musqueam community opened the ceremony with a traditional welcome and an acknowledgement that the event took place on traditional, ancestral and unceded territory.

BC premier John Horgan was also in attendance.

The ceremony concluded with more collaboration: combining the traditional academic dress of UBC and SFU, Petter presented the Aga Khan with an SFU robe and Ono provided a UBC hood.