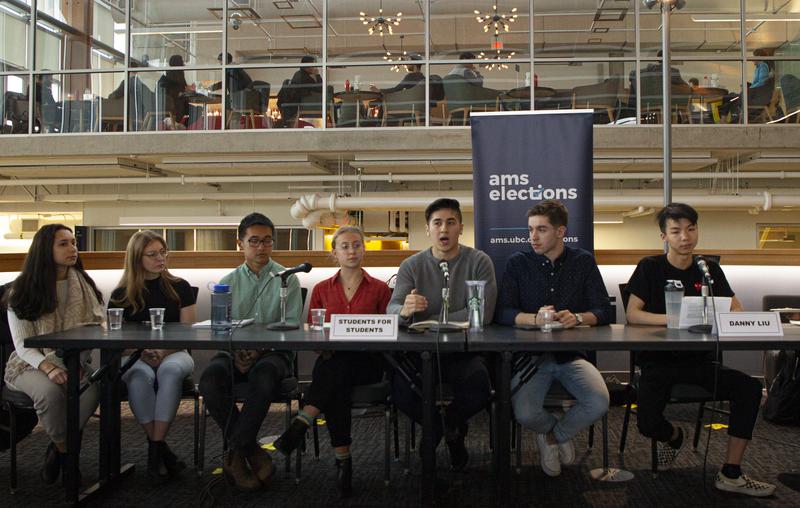 All six members of the Students for Students slate were present at the Great Debate to contend independent candidate Danny Liu. Elizabeth Wang

Liu, a representative for the Science Undergraduate Society on AMS Council, remained consistent in his prioritization of community outreach as the basis for accessibility and transparency moving forward. Meanwhile, Students for Students — helmed by current AMS President Chris Hakim — delved into the high-level platform points they outlined during their first debate with specific plans for action.

Hakim narrowed down his answers from the platform buzzwords rampant in Tuesday’s debate to tangible goals, playing to his experience in various AMS roles.

When asked about the biggest legal issue students should know about, Hakim spoke to the upswing of students becoming engaged in activism and protests over the past year.

“Our slate, as well as our predecessors in the Legal Fund Society, have been funding workshops for students to know their protest rights,” he said.

“We’re going to continue expanding upon that to bring in more legal experts because at the moment we’re bringing in people who have previously done protests at a high scale. We want to bring in lawyers that can show you what your rights are when it comes to protest.”

When asked about new potential workshop topics, Hakim outlined a plan to build on the SLFS’s relationship with the Sexual Assault Support Centre to develop workshops on navigating the legal system in sexual violence cases.

Liu sustained a consistent tone throughout the duration of the debate. He argued for consultation with the UBC community to determine what should be done regarding the $750,000 reserve of student funds the SLFS has acquired and what new legal topics the SLFS should offer for workshops.

Beyond campus consultation, Liu was also in favour of working with legal experts to ensure UBC residents know their tenancy rights on campus.

One of the more lively exchanges in a somewhat tame debate came during the open question period when all members of Students for Students, excluding Hakim, were asked to explain what individual contributions they would make to the SLFS.

Prior to this point, Hakim was the only member of Students for Students who had spoken in the debate.

Students for Students member Sarah Sebba explained that her experience at the SLFS as its administrative assistant gave her an understanding of its structure, including “issues that our predecessors have left for us to deal with and how unorganized and intransparent, speaking honestly, a lot of things were left.”

“I know the organizational structure, I know where we can improve,” she said.

The other candidates spoke to experiences parallel to those outlined in their platforms.

Near the end of the debate, Liu acknowledged he was in an interesting position as an independent candidate running against a slate of six people.

“Crafting my platform, I was aware that, ‘Hey, it's just me, I'm running as an independent and I am against six other people,’” he noted.

“Knowing that I made my platform grounds accessibility and … transparency. … And frankly, looking at all their goals, I am more than committed to working with them as a team.”