We fact-checked everything your Senate candidates said 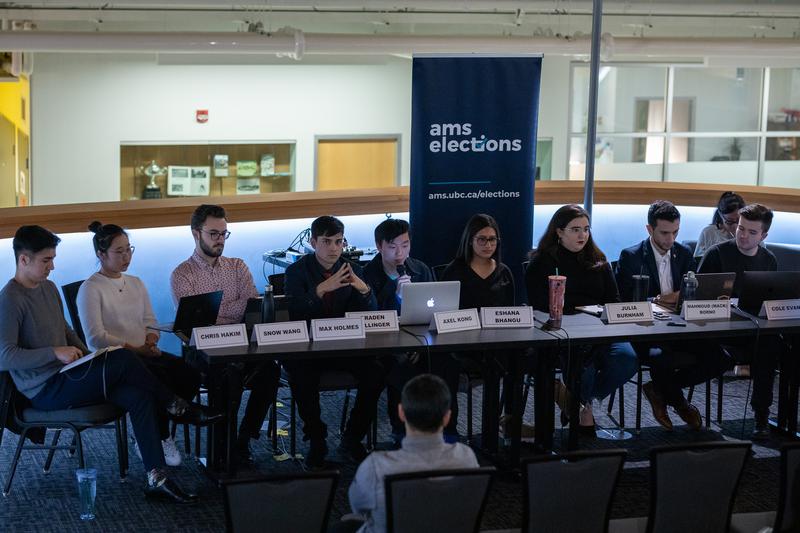 There are nine Senate candidates this year. File Zubair Hirji

A lot of bureaucratic lingo was thrown around at this year’s AMS Elections debates — and it can be difficult for students who don’t work within the AMS to follow along, let alone know if they’re telling the truth.

Here are our deep dives into some of the more questionable claims made by your senator-at-large candidates. 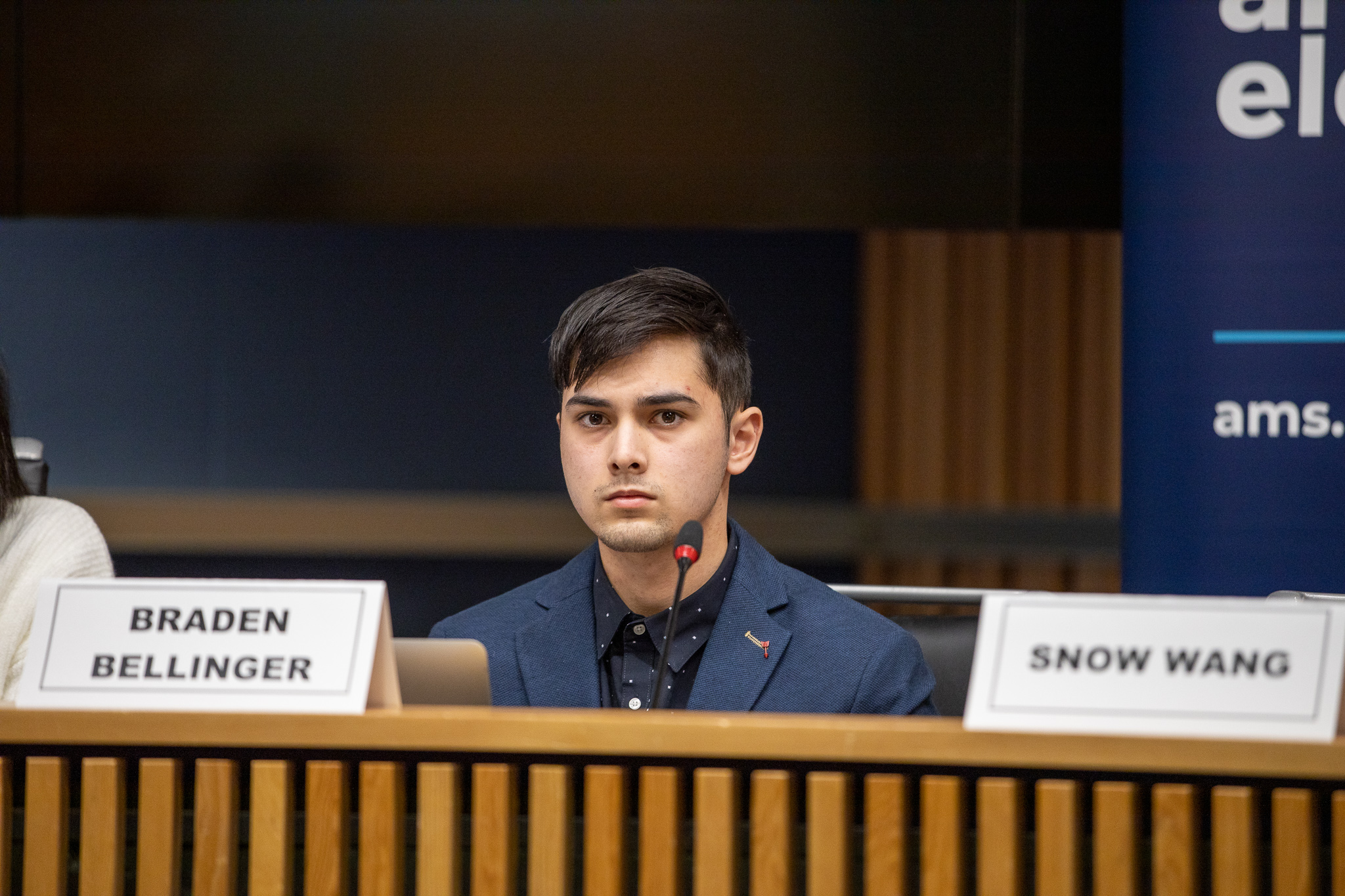 Bellinger: “There are more Native peoples that are on this land but the Musqueam people [are] the only peoples that UBC has a formal relationship with.”

True. In 2006, UBC and the Musqueam Indian Band signed a Memorandum of Affiliation that formalized a working relationship between the parties. But Bellinger seems to be implying that there are other First Nations on UBC’s Vancouver campus. UBC only acknowledges that it sits on the land of the Musqueam people in its official acknowledgements and materials. But according to the BC Treaty Commission, Point Grey is the traditional home to parts of the Tsleil-Waututh Nation, which has most of its territory in North Vancouver. 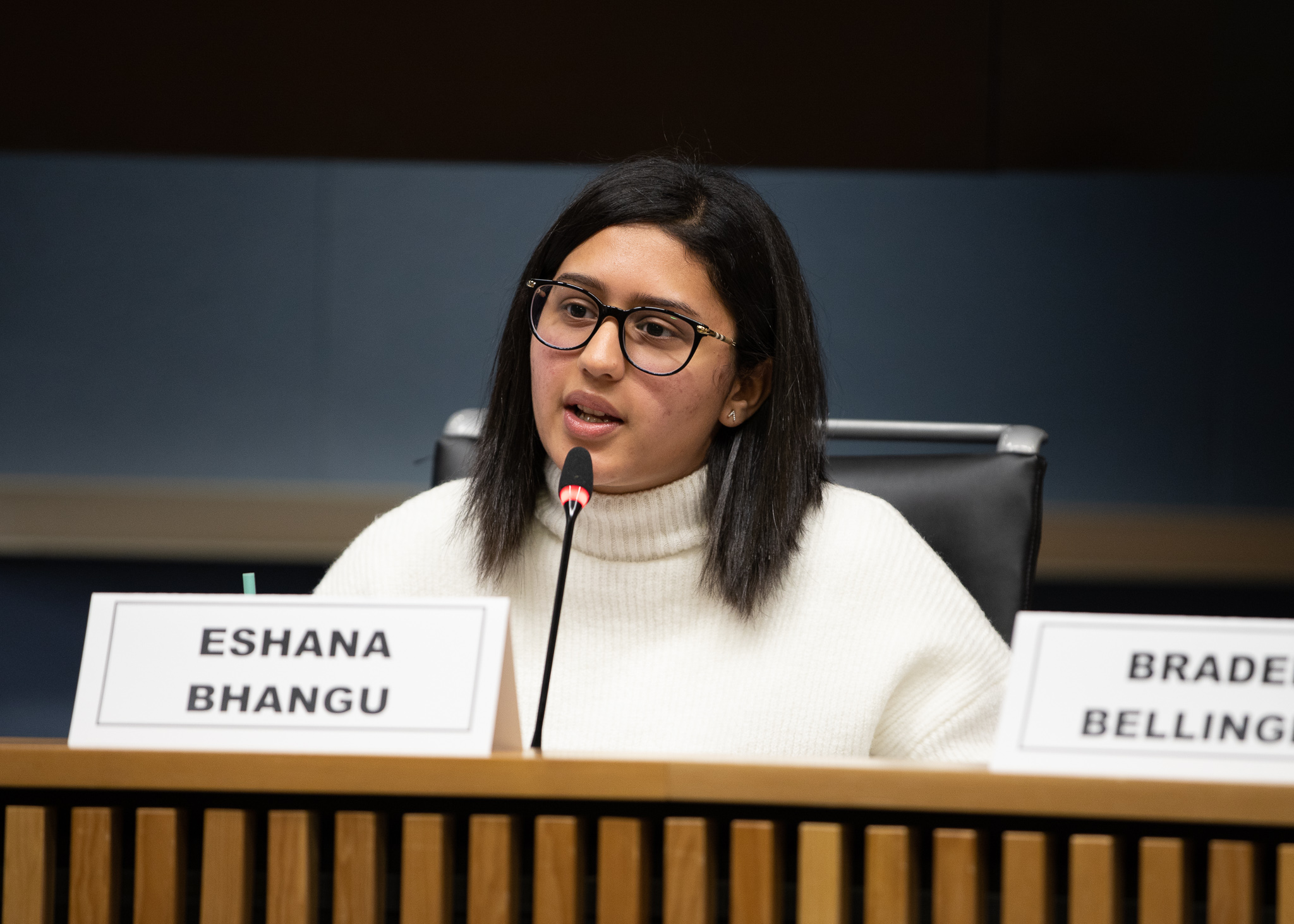 Bhangu: “With increases in tuition every year, especially international students who pay a large sum to attend UBC …”

Bhangu: “UBC is one of the only two universities in Canada (the other being McGill) that don't have a fall reading break for students.”

False: As per our own coverage (which surveyed 13 universities), Simon Fraser University has yet to implement its own fall reading break, making UBC one of at least three universities in Canada without one. Bhangu is correct in saying that McGill is also one of these universities, however.

Bhangu: “I think ... it’s really important to perhaps consider introducing shorter term limits for senators. So that there is rotation, especially since student senators always have one-year terms, unless you're reelected.”

Misleading: There are no term limits for non-student senators, so instead of introducing shorter term limits, Bhangu might want to advocate for limits to exist in the first place. 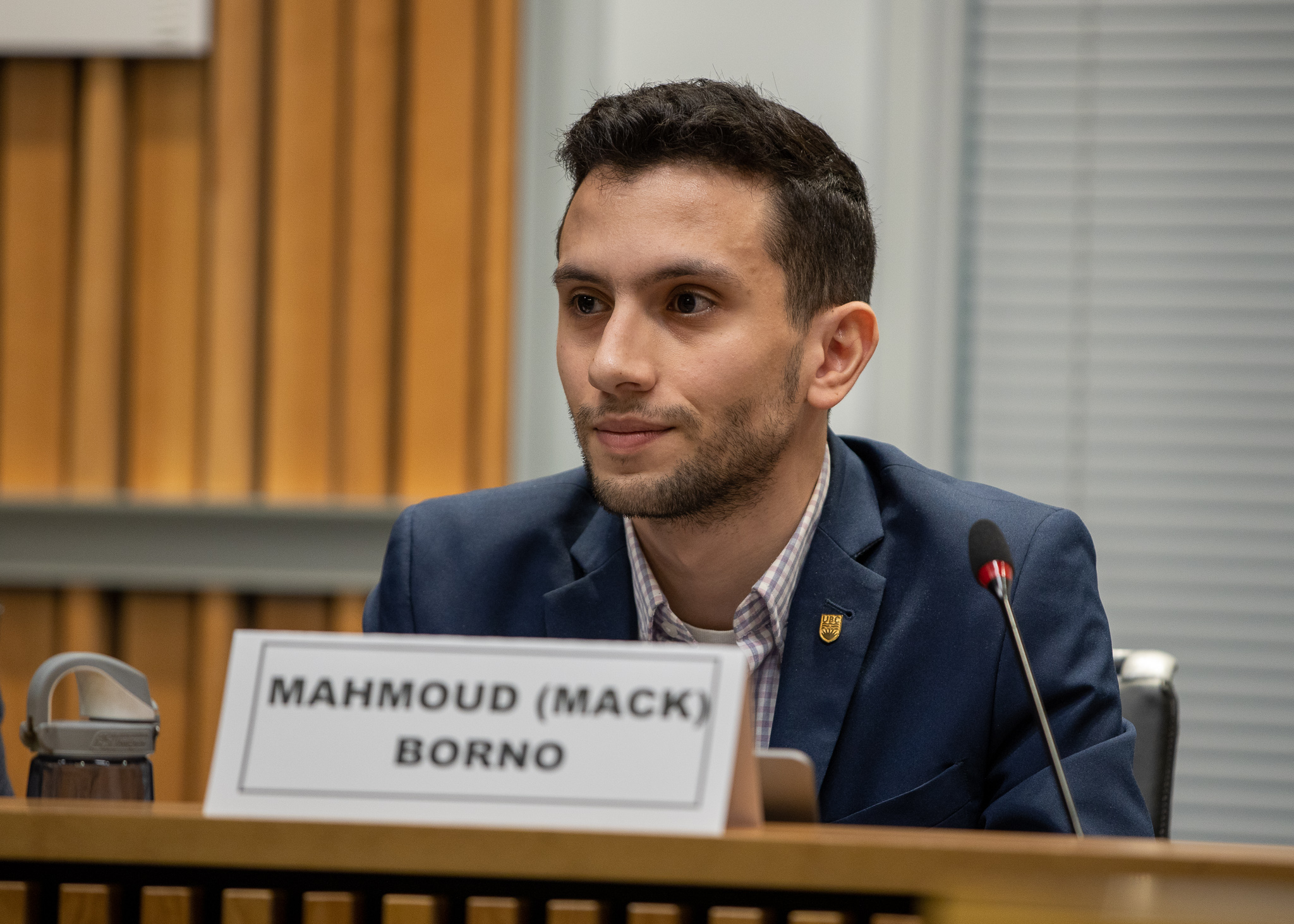 Borno: “I want to … push for a Middle Eastern and Northern Africa or African Studies program since there [are] not many courses that UBC offers on the rich and historical region.” 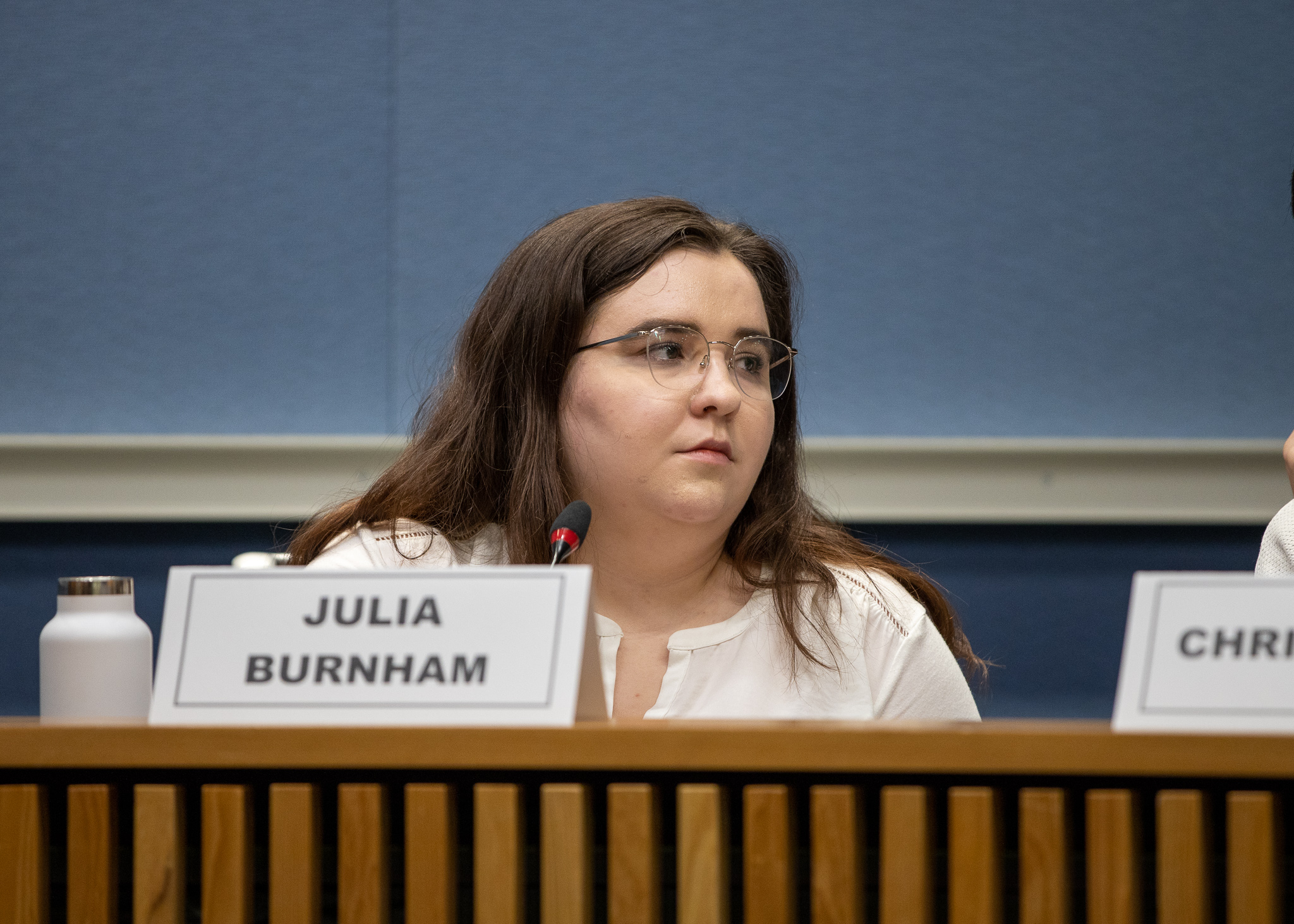 Burnham: “Currently, UBC requires students to take 24 credits within the winter terms in order to be eligible for awards.”

True: The “Maintaining loan and awards eligibility” page on the UBC website confirms that in order to be eligible for merit awards, students must register in at least 24 credits in the winter session, not counting credits from potential summer classes.

Burnham: “I’ve … been very active on Reddit to try and answer a lot of institutional questions. We have our student senate caucus Twitter account where we try and live-tweet the meetings.”

Burnham: “So I think one of the really important things here is actually looking at the faculty elections, because 99 per cent of the time, which is hyperbolic, but they’re actually acclaimed and they have no one running against it. The student senator races are always the most competitive races, from the faculty, from the convocation senators.”

True: The website for the 2019/20 joint faculty Senate elections shows that 9 out of 12 Vancouver representatives and 14 out of 16 Okanagan representatives had already been acclaimed as soon as nominations closed and that elections are only held “if necessary.” In 2017, all 12 convocation Senators were acclaimed.

Burnham: “... If you look at more recent examples, like the Lynn Smith interpretation from a few years ago, the Berdahl case, legal scholars have made assessments but it’s not the [academic freedom] statement itself, but it’s how UBC is choosing to interpret it.”

True: The report by the Hon. Lynn Smith on the Berdahl case — an incident in 2015 where the university’s response to a blog post by Dr. Jennifer Berdahl sparked an investigation into UBC’s academic freedom policies — stated that “the university must also defend academic freedom against interpretations that are excessive or too loose, and the claims that may spring from such definitions.”

Burnham: “The reality is that the Senate is being quite obtuse about this climate endorsement. They endorsed without the actual recommendations, which doesn’t mean anything.”

True: As a UBC Student Senators live-tweet from the December 2019 Senate meeting confirms, in passing a motion to endorse the UBC President's Declaration on Climate Emergency, it was amended to exclude the recommendations outlined in the plan. Instead, the amendment stipulated that the recommendations would be developed in the process of implementation.

Burnham: “The [second floor of the] math building ... is not accessible, [since] there’s no elevator.”

True: The Ubyssey covered this issue in 2019, when math professors and students marched to the dean of science’s office to demand the building’s renovation. The building does have an accessibility lift, but UBC Wayfinding's website clarifies that the "upper floors of this building are inaccessible due to stairs." 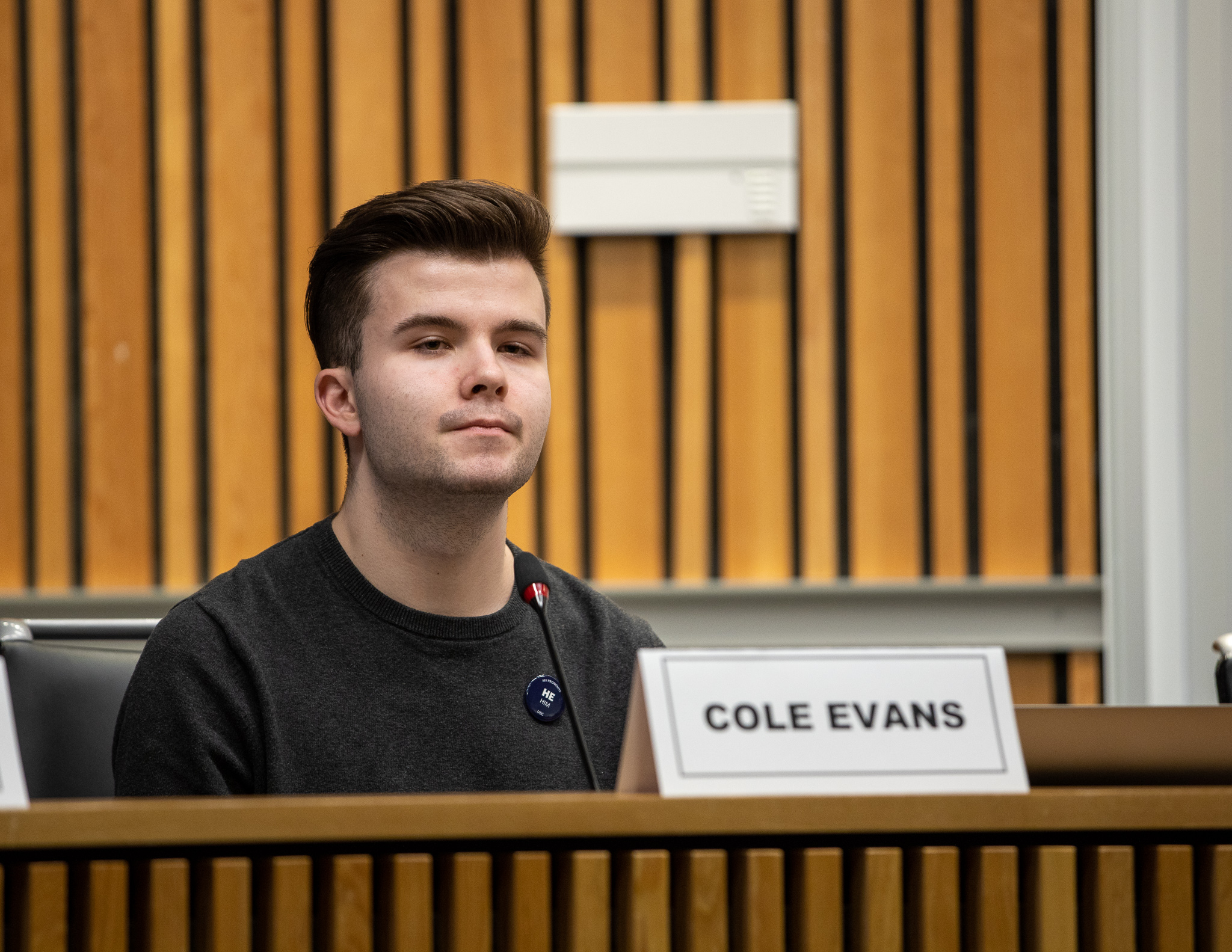 Evans: “Summer school is becoming much more common among students than it used to be.”

False: Data from the Planning and Institutional Research Office shows a two to three per cent increase per year in enrolled summer school instruction time in recent years. However, UBC total student enrolment increased at just over three per cent over the same period, meaning summer school among students has not become significantly more or less common. 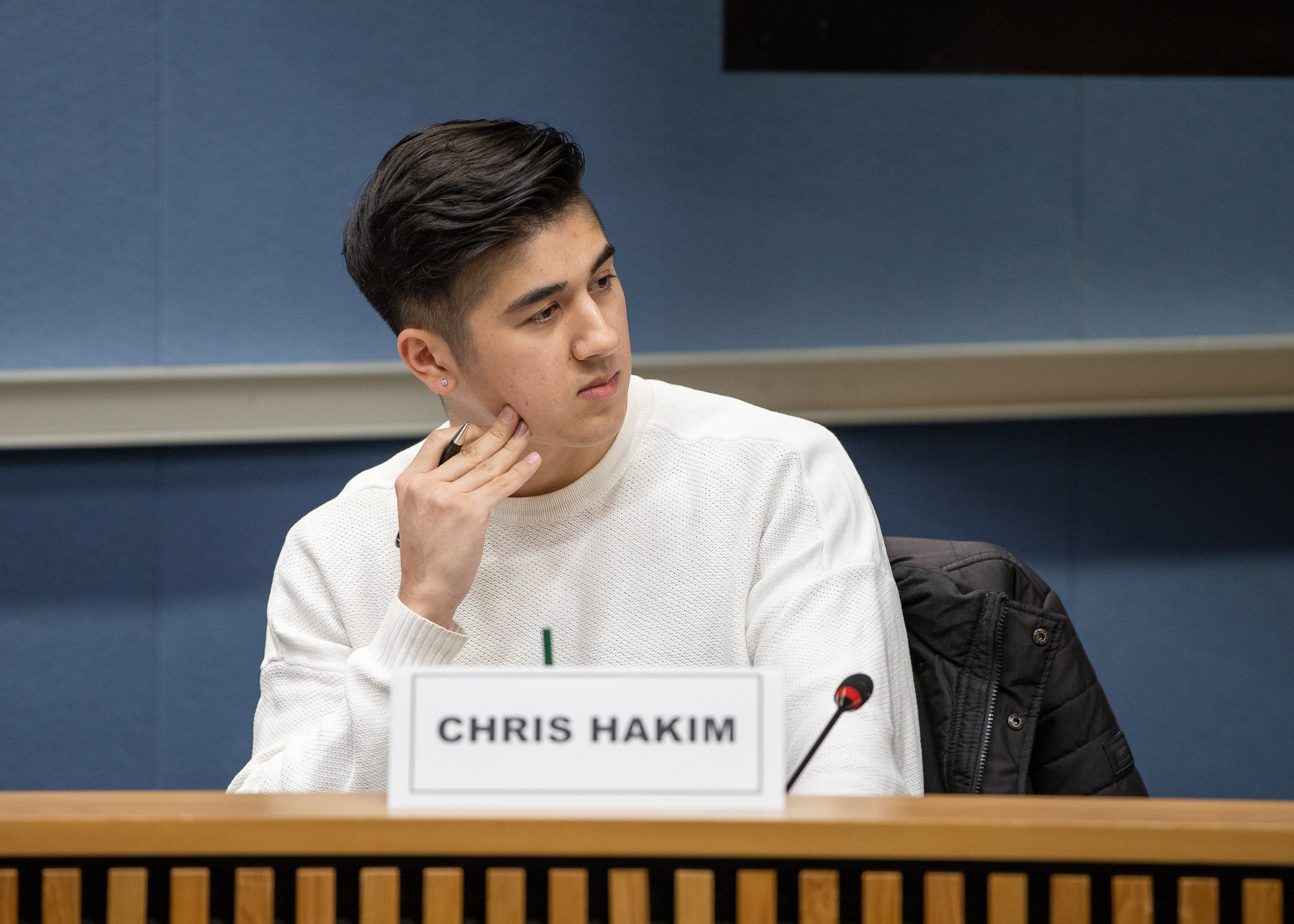 Hakim: “Meanwhile, the data shows that job seeking continues to be the most common post-graduation plan for students.”

True: According to the 2019 AMS Academic Experience Survey (AES), 71 per cent of grad students’ post-graduation plan is job-seeking and for undergrads, that number is 63 per cent.

Hakim: “Over 40 per cent of students have reported that they face financial hardship due to tuition and this number has been steadily increasing.”

Mostly true: Again citing the AES, Hakim is only mostly correct this time. Forty-three per cent of undergrads say they face financial hardship due to tuition and other expenses, while 48 per cent of grad students say they do. While the number does exceed 40 per cent, it’s not solely due to tuition.

Likely true: Co-operative programs-related definitions on Senate’s website date back to May 17, 2004. We couldn’t find any evidence of audit thereafter. 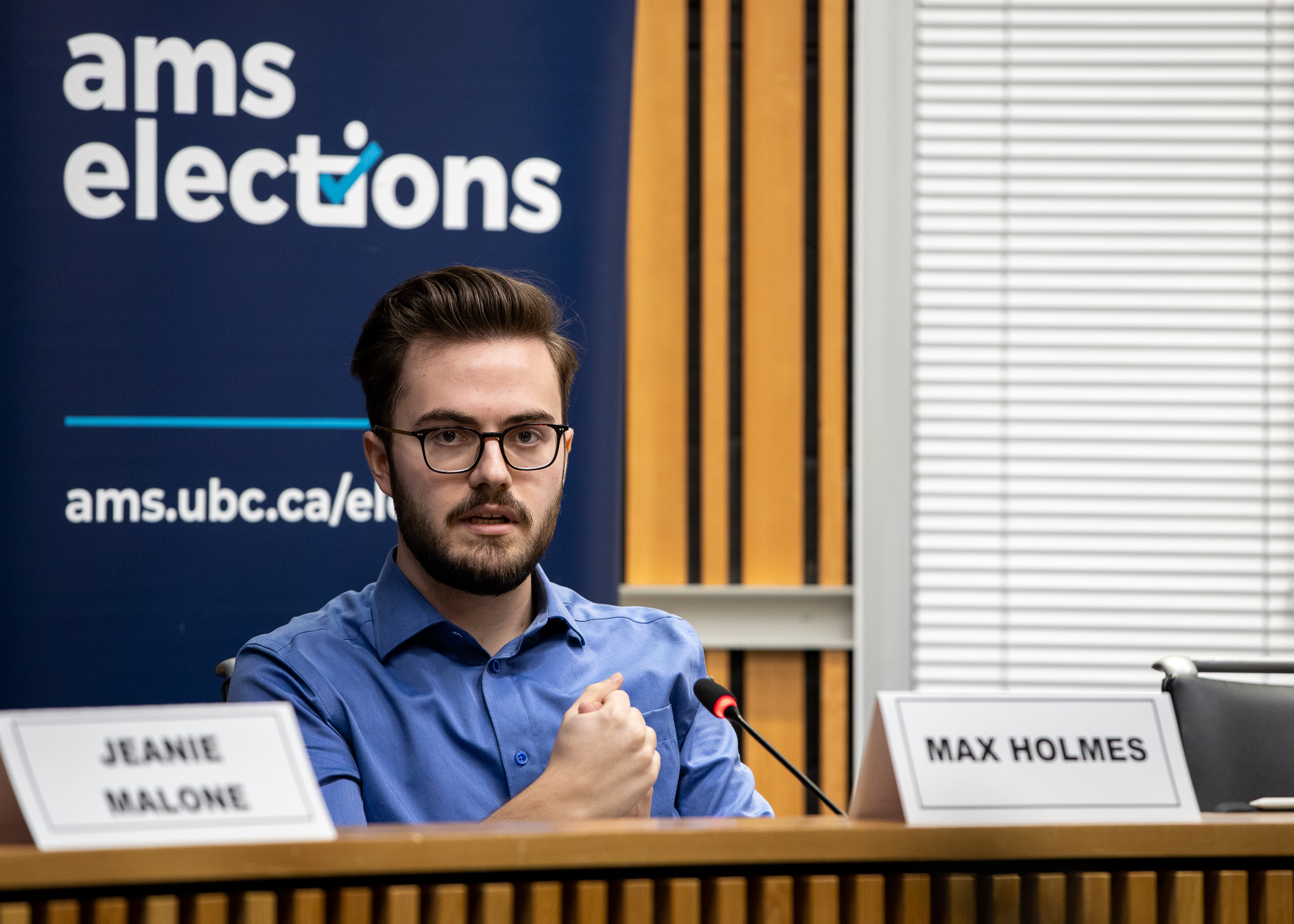 Max Holmes: “I spent over 5,000 hours advocating for students on the Board and the Senate.”

Likely: Let’s say we start counting from around the time when Holmes started as associate VP academic and university affairs (AUA), 148 weeks ago in May 2017. 5,000 hours in 148 weeks (including holidays) translates to an average of 35 hours a week, so it’s possible he put in the hours he says he did, especially when you consider he’s been working multiple positions in that span. He was elected VP AUA — a full-time job — in May 2018, as well as student senator. He was elected student representative on the Board of Governors (BoG) in May 2019 and re-elected to Senate. He’s certainly been covering a 40-plus-hours a week work load.

There’s no way to verify this claim, though, so let’s call it what it is: a catchy tagline.

Holmes: “This is the second consultation [regarding fall reading break] that UBC is launching. Last year was an AMS consultation that only went to students.”

True: The AMS first began its consultation on fall reading break with a town hall and a student consultation survey overseen by Holmes — then the VPAUA and student senator — during the 2018/19 school year. Currently, the Senate is accepting responses from students and faculty to its own survey, which is designed to take feedback on “how terms and examinations are scheduled,” and contains questions on different fall mid-term break scenarios. Holmes is adamant that this will be the final consultation for fall reading break and that a proposal will be brought forth in May — implying that we could see fall reading break sometime soon — but after years of promises without delivery, we’ll believe it when we see it.

Holmes: “The Ubyssey’s coverage was misleading when they said that there was an August option on the fall reading break consultation.”

False: Holmes is correct that there is no August option in the fall reading break consultation, but The Ubyssey never claimed otherwise in our recent coverage of the consultation.

True: The Senate website states that “Senate Agenda Committee meetings are limited to members of the Committee.”

Holmes: “The [Board of Governors] is now more transparent than the Senate.”

Possibly true: The Board of Governors (BoG) posts the full minutes of its open meetings, as well as webcasts, on its website. The Senate posts minutes but not webcasts. Most BoG meetings are open to the public, though they can choose to go in-camera during a meeting, which means the public has to leave. The BoG website contains a document that clearly spells out how meetings are supposed to go as well as the rules governing open and closed meetings. We were unable to find a similar document on the Senate’s website.

True: The Inclusion Action Plan was approved for submission to the BoG in November 2019 and is expected to see its final approval from the Board later this year. While the Senate received a report on the plan in November, it has not yet been endorsed. 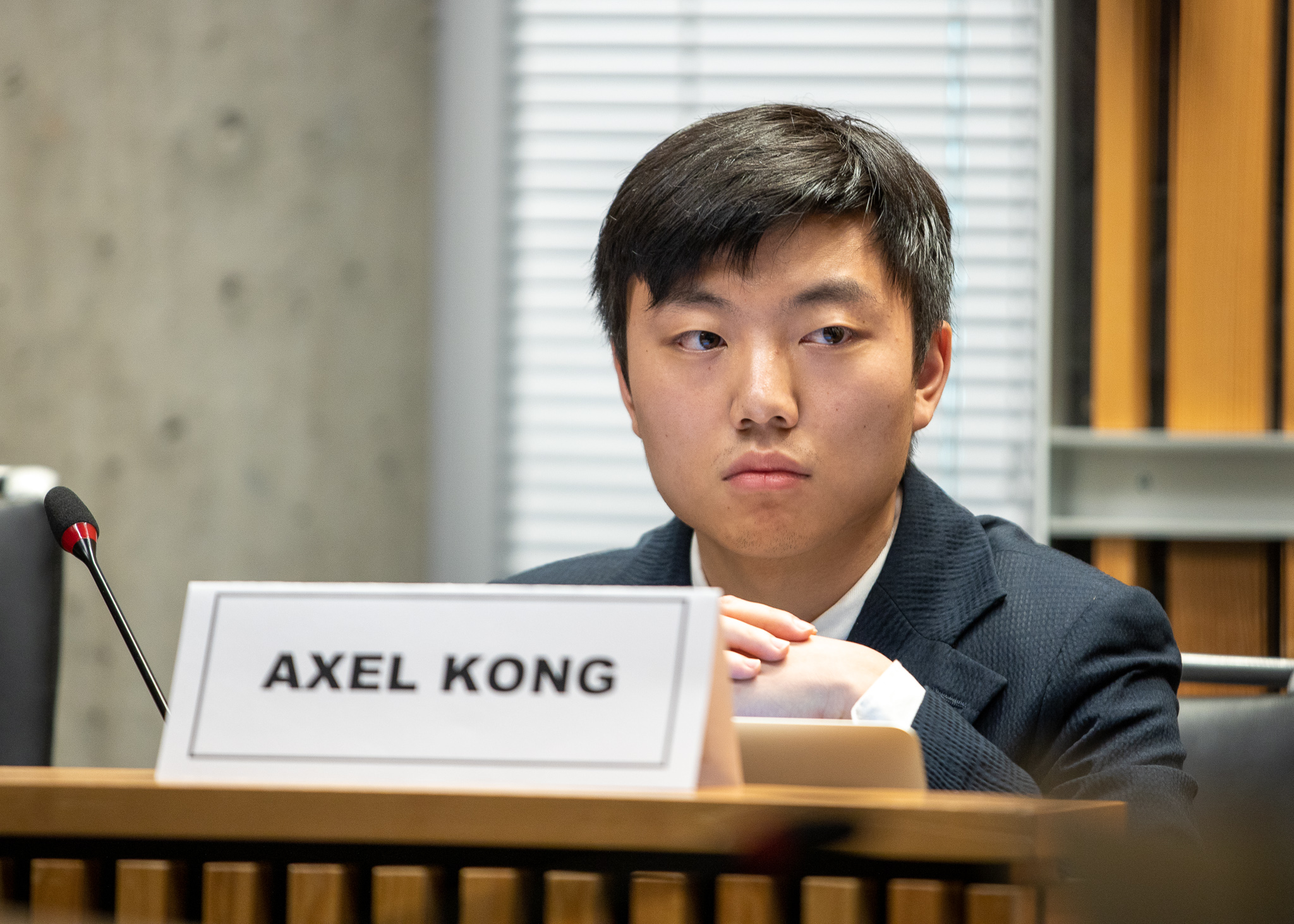 Kong: “With regards to climate emergency, I don’t think Senate’s got to do with it. It’s something that belongs to the Board of Governors”

False: Senate endorsed UBC’s declaration on the climate emergency. Senate is involved in looking at learning outcomes, curriculums and proposals. They also need to ensure that their budgets tally. However, Kong later said he meant the BoG has more to do with such issues.

Misleading: Kong said he discovered this information on the UBC Academic Calendar, but he was probably looking at the now defunct First Nations languages program within linguistics. The program has been replaced by the First Nations and Endangered Languages program, as candidate Burnham pointed out. 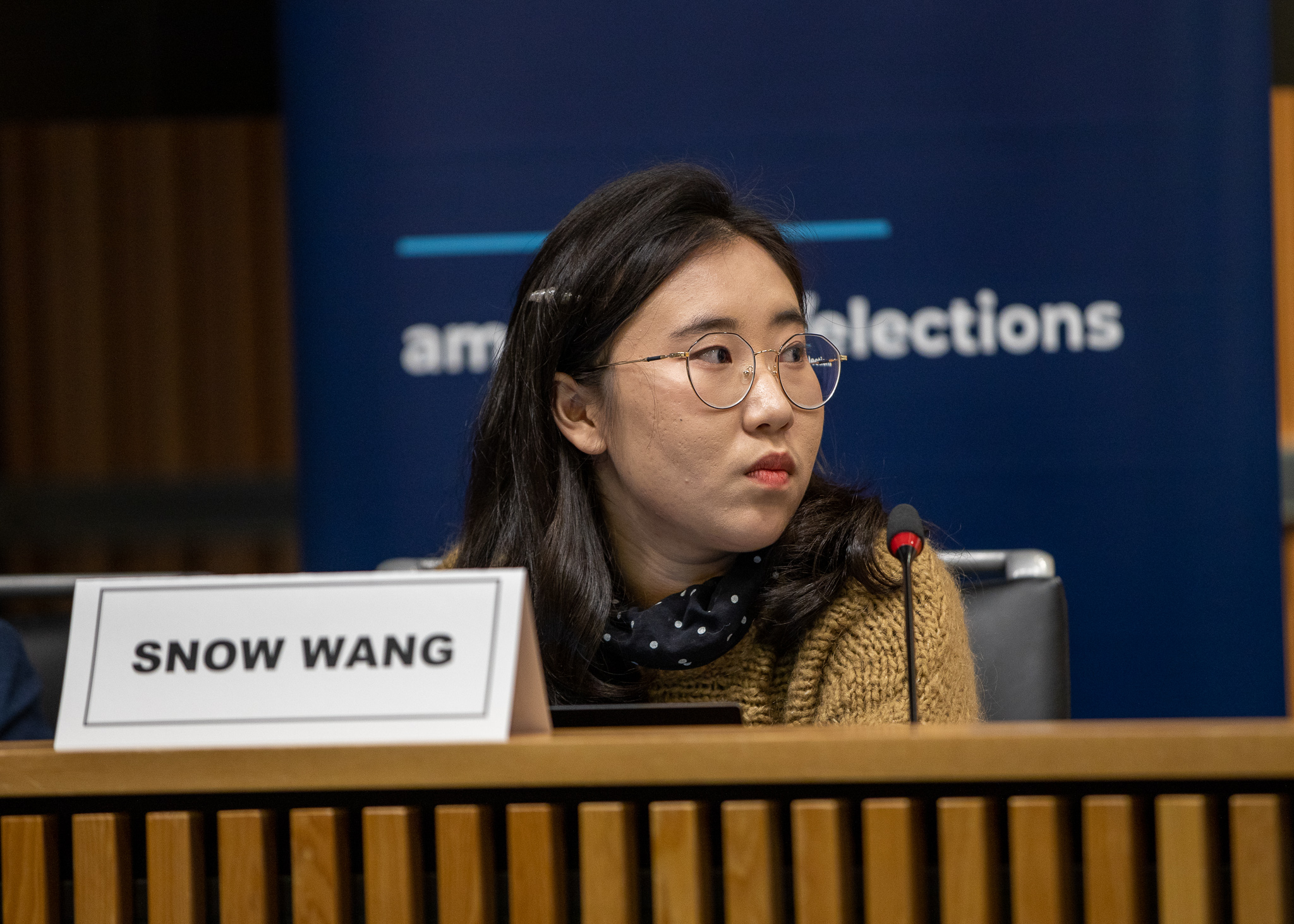 Wang: “Last year, many students did not support the fall reading break due to the proposed time.”

Partly true: It’s hard to quantify “many,” but it’s true that not everyone was happy with the idea of a fall reading break. The Engineering Undergraduate Society (EUS) released a statement in 2019 saying that they were not adequately consulted about the implementation of a fall break. The EUS felt the student consultation survey was biased in favour of a break, among other concerns. In a draft document discussing the survey’s results, it was noted that 81 per cent of respondents were in favour of implementing a break.

Wang: “I really strongly agree with Max because the climate emergency is not mainly a response by the senators but also other faculty members. So, I think this is not a really big issue for the senators.”

False: Holmes actually said “... so the idea that the Senate is not as responsible for this is the same arguments the very people who didn’t want to vote for the [climate emergency] statement made.” In addition, the Senate is concerned with the climate emergency, as evidenced by its endorsement of the statement.

This is a live article and will be updated as further information comes to light.