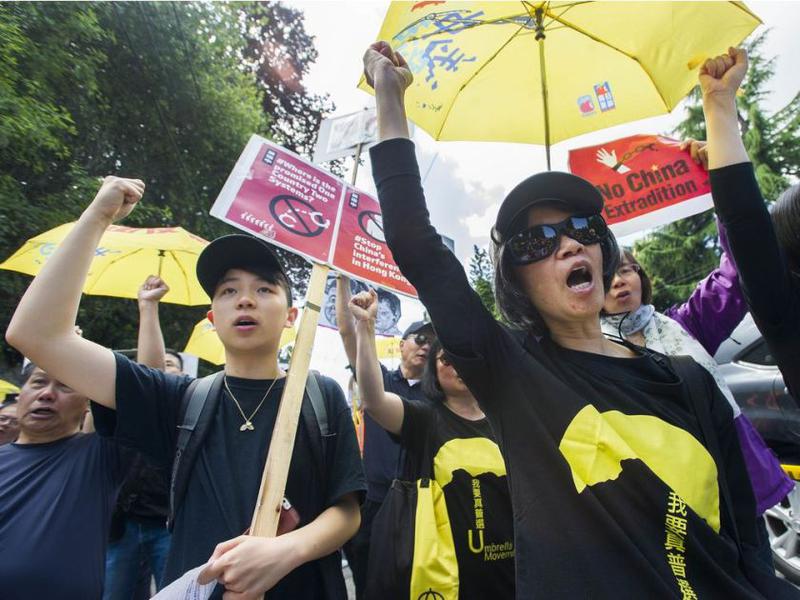 On June 9, nearly 300,000 Hongkongers, including Leung, took to the streets to protest the amendments. Courtesy Jason Payne/Vancouver Sun

A group of UBC students is circulating a petition that speaks out against Hong Kong’s controversial extradition bill, which critics say endangers human rights.

“I think university students should care about the world and not only their countries. Hong Kong is an international city and there are so many Hong Kong students studying at UBC,” said Leung.

Over 100 students, staff and alumni are calling on the Hong Kong government to withdraw its amendments to the Mutual Legal Assistance in Criminal Matters Ordinance and the Fugitive Offenders Ordinance.

The amendments allow the transfer of fugitives from Hong Kong to countries where there is no existing extradition deal in place, namely China, Taiwan and Macau.

Hong Kong’s government leader, Chief Executive Carrie Lam, said the bill is necessary to bring fugitives to justice. The changes were made to extradite a Hong Kong man to Taiwan, where he is accused of killing his pregnant girlfriend Poon Hiu-wing.

In a press release, a government spokesman wrote that Hiu-wing’s murder “brought into sharper focus deficiencies of the existing regime.”

“If these deficiencies were not addressed as a matter of priority, Hong Kong would continue to be a bolt-hole for criminals, putting Hong Kong residents' safety at risk and disregarding our international responsibilities in the fight against cross-border and transnational crimes,” read the release.

But the bill has received pushback from Hong Kong’s citizens and human rights groups, who say it will empower China to punish critics through politically motivated extraditions.

“The situation is that you might criticize China in Canada, for example, and you travel to Hong Kong, and they may extradite you to China because you are in breach of Chinese law,” said Leung.

“That is the reason that everyone in the world should be scared of [these amendments],” he added. “It’s a human rights issue.”

Though the ordinances bar fugitives from being transferred for political reasons, its opponents fear that China could fabricate criminal claims.

Leung has little faith in China’s notorious legal system, which has a conviction rate of over 99 per cent.

“They may use some excuse to extradite you…But the real reason is political,” he said.

The bill is “another blow to people who believe in democracy,” said Dr. HsingChi von Bergmann, an associate professor in the faculty of dentistry who signed the petition.

After Britain signed over control of Hong Kong to China in 1997, the “one country, two systems” arrangement allowed Hong Kong an independent economic and political system.

In a joint statement, Canada’s Minister of Foreign Affairs Chrystia Freeland and the UK’s Foreign Secretary Jeremy Hunt expressed concern that the bill could “impact negatively on the rights and freedoms set down in the Sino-British Joint Declaration.”

“It is vital that extradition arrangements in Hong Kong are in line with ‘One Country, Two Systems’ and fully respect Hong Kong’s high degree of autonomy,” they wrote.

Leung believes the bill’s passage will erode that autonomy.

“It destroys the independency of Hong Kong and its judicial system. If the amendment is passed, Hong Kong is no longer an independent jurisdiction, but part of China, controlled by China,” he said.

Hongkongers, including Leung, took to the streets to protest the amendments on June 9. Police estimated nearly 300,000 participants while the protest’s organizers said over 1 million attended the march. Mass demonstrations continue as citizens clash with police.

On Saturday, June 15, Hong Kong's Chief Executive Carrie Lam announced that the extradition bill has been suspended in response to similar protests in Hong Kong.

"We have made many attempts to narrow differences and eliminate doubts," said Lam as reported in a CNN article. "In the last week, tens of thousands of people took part in protests and gatherings. Serious conflicts broke out ... resulting in a number of police officers, media workers and other members of the public being injured. I am saddened by this."

According to Lam, there is no timeline for when discussions will continue, but the bill is unlikely to be passed this year.

Both Leung and von Bergmann believe continued opposition is crucial to the future of Hong Kong’s democracy, and Von Bergmann stressed the importance of youth participation in particular.

“If the young people don’t take the initiative to try to bring this forward to the world, then sooner or later we will see a lot of tragedies.”