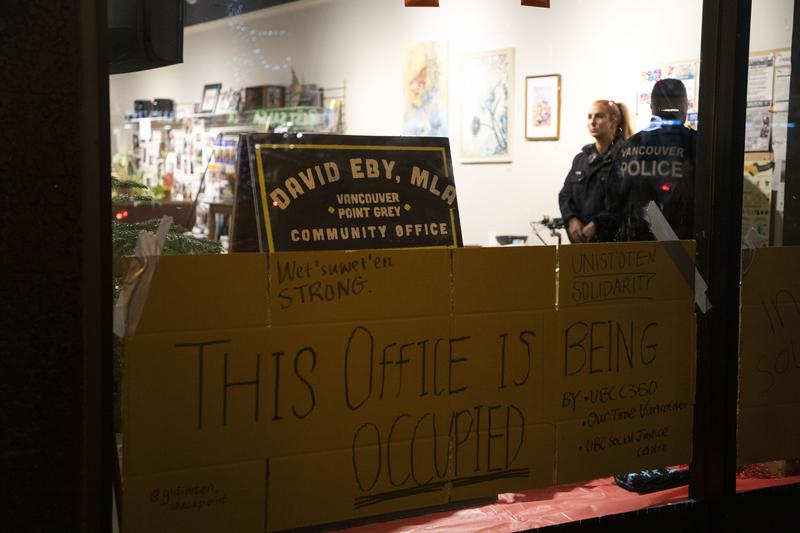 “We’re planning to stay here as long as it takes, even after hours.” Elizabeth Wang

Three UBC students were arrested this evening after taking a stand against the Coastal GasLink pipeline in support of the Wet’suwet’en First Nation.

Starting on the morning of January 28, 25 youth demonstrators from the activist groups UBCC350, Our Time Vancouver and the UBC Social Justice Centre occupied the BC Attorney General and Point Grey MLA David Eby's Kitsilano office, and refused to leave until Coastal GasLink’s plans to construct a natural gas pipeline through Wet'suwet'en territory are halted.

The group listed their demands in a press release and on social media.

“The main demand is that we speak with David Eby, get him to use his authority as Attorney General to call off the RCMP checkpoint that is currently on Wet’suwet’en territory and to also use his authority to enforce UNDRIP,” said Brandon Gosnell, a member of Our Time Vancouver and the Indigenous Solidarity Working Group, in an interview with The Ubyssey.

Inside Eby’s small office, the air was thick, filled to the brim with protesters passing the time by playing card games, talking intently and strumming chords on a guitar.

“We’re planning to stay here as long as it takes, even after hours,” said Gosnell. “Some folks are going to stay after and potentially risk arrest to assert their right for civil disobedience and also assert the rights of Wet’suwet’en to have their voices heard — and also have the Hereditary Chiefs heard, and the youth of Victoria who unfortunately weren’t heard when they were occupying Michelle Mungall’s office last week.”

The sit-in was organized in solidarity with Indigenous youth who occupied the Office of Michelle Mungall, minister of energy, mines and petroleum resources, in Victoria on January 21. After the group maintained a presence for over 18 hours, 12 protesters were arrested and they subsequently filed an official complaint regarding their “forceful” treatment by the RCMP.

Mungall refused to meet with the group and has yet to make a statement on the arrests.

When Eby’s office closed at 4:30 p.m., police were called to the scene and all demonstrators were asked to leave. The three students who were prepared to risk arrest for trespassing stayed inside along with two “police liaisons,” while the rest continued protesting outside.

Rayne Fisher-Quann, a first-year science student at UBC, protested the whole day — from 9 a.m. until 7:30 p.m. — but she chose not to risk arrest by staying in the office after hours because she didn’t bring identification.

“We had all the international students clear out [as well as] people who didn't have ID … Those [who risked arrest] are the people who are comfortable ... people who have been cleared on the risks and trained as for what's the most safe,” she said.

A VPD van arrived at 7:30 p.m. to arrest and transport the students to the Vancouver Police Department on Cordova street. At the time of the arrests, there were at least five police vehicles and 10 officers.

“Courage, our friend. You do not walk alone. We will walk with you and sing your spirit home.” Elizabeth Wang

As the students were hand-cuffed and escorted from Eby’s office out the back door, other protesters who had not been arrested gathered around singing, “Courage, our friend. You do not walk alone. We will walk with you and sing your spirit home.”

In an emailed statement to The Ubyssey a spokesperson for the Vancouver Police Department confirmed that three protestors were arrested but released later that evening.

“After staff asked them multiple times to leave, police arrived and arrested the three people for Mischief.  They were taken to jail and released with a court date,” reads the statement.

Several protesters who were not arrested assembled at the police station to ensure their friends' safety. At 10:30 p.m., UBCC350 tweeted that the three students were charged with mischief and released.

In a written statement to The Ubyssey, Eby said he has met with UBCC350 and other community groups to discuss their concerns related to “the very sensitive situation related to the Wet’suwet’en.”

“I try to be as available as possible to hear from constituents about the issues that concern them, and to make my office as open as possible, including extending office hours when needed,” reads the statement from Eby.

“However, in fairness to my staff and in recognition of sensitive personal information that is in casework files stored at our office, all visitors to the office must leave when the office closes at the end of the day.”

Members of the Wet’suwet’en First Nation have opposed pipeline development for years. In January 2019, 14 activists were arrested by the RCMP at the Unist’ot’en camp, where they were attempting to prevent the construction of Coastal GasLink’s liquefied natural gas pipeline.

Canadian law requires Indigenous Nations to be consulted when constructing pipelines through reservations, but as long as a dialogue is started, the government doesn’t need to obtain Indigenous Nations’ official consent before beginning construction.

“All five Wet’suwet’en clans oppose the pipeline and have not provided free, prior, and informed consent,” reads the protesters' press release.

But while the Wet’suwet’en's hereditary chiefs strongly oppose the pipeline, its Band Council voted in favour of its construction, revealing a division among the Nation.

The United Nations Declaration on the Rights of Indigenous Peoples (UNDRIP) outlines the practice of free, prior and informed consent (FPIC) as an Indigenous Peoples’ right. Although Canada has signed the agreement and “intends” to implement it, the government’s current “duty to consult” policy does not recognize Indigenous rights to deny pipeline development on their lands, replicating a longstanding history of colonial violence against Indigenous peoples.

For Fisher-Quann, opposing the pipeline is about acknowledging and fighting against this violent history.

“So I think for a lot of us, and especially for me, this was not wanting to be complicit in the things that our government is doing and wanting to be on the right side of history.”

This is breaking news and will be updated as more information becomes available.

This article was updated to include a statement from the Vancouver Police Department.

This article was updated to note that demonstrations did not continue at the Vancouver Police Station.

This article was updated to include a statement from Attorney General and Point Grey MLA David Eby.