UBC, City of Vancouver and First Nations join together to advocate for SkyTrain to UBC

Late last year, the three groups drafted a Memorandum of Understanding and they now plan to advocate for federal, provincial and regional support and funding. File T. George McBurney-Lin

The City of Vancouver, UBC and the Musqueam, Squamish and Tsleil-Waututh Development Corporation (MST-DC) have announced they are joining forces to advocate for the completion of the SkyTrain expansion to UBC as quickly as possible.

Late last year, the three groups drafted a Memorandum of Understanding (MOU) and they now plan to advocate for federal, provincial and regional support and funding.

“Extending SkyTrain to UBC will make the campus more accessible to current and prospective students, faculty, staff and regional partners and it will enable us to enhance our teaching and research programs and deepen our community and industry engagement,” said UBC President Santa Ono, at a press conference on January 29.

MST-DC said they were excited to work together with UBC and the City of Vancouver on the SkyTrain project and emphasized that access to safe, reliable and affordable transportation is critical to connecting the region.

“We look forward to developing our lands into inspiring, progressive and sustainable new neighbourhoods that benefit the community, region and members of the Musqueam, Squamish and Tsleil-Waututh,” said MST-DC leadership.

According to a January 2019 report from TransLink, a SkyTrain to UBC would be the most sustainable option to meet long-term transit ridership demands in the region, but also the most expensive.

Last January, Vancouver City Council voted 9-2 in favour of extending the Broadway Subway Project all the way to campus. The project currently has the funding to extend the Millenium Line from VCC-Clark to Arbutus. 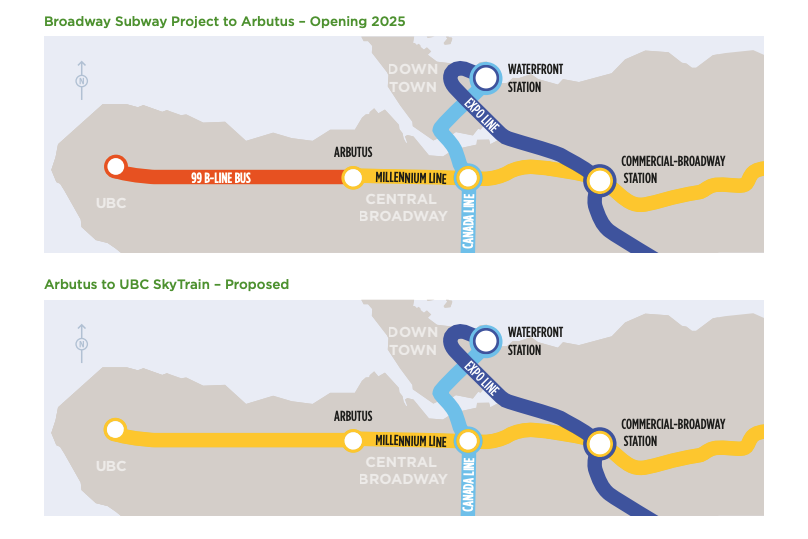 Last January, Vancouver City Council voted 9-2 in favour of extending the Broadway Subway Project all the way to campus. Screenshot City of Vancouver

“Building SkyTrain all the way to UBC is a regional priority that will not only help connect academic and health sciences along Broadway with the rest of the region, it will put Reconciliation into practice as we work in partnership with the MST Development Corporation,” said Vancouver Mayor Kennedy Stewart.

The daytime population of UBC exceeds 80,000 people. Currently, UBC is served by the 99 B-Line which is the busiest bus route in Canada and the United States. According to TransLink, the line serves around 60,000 customers a day and in 2018 it saw 17,414,000 boardings.

Even with buses running every two to three minutes during peak times, the 99 B-Line remains the most overcrowded bus in the region. TransLink estimates that by the time the Millenium Line extension opens around 2025, the peak ridership on the 99 B-Line between the SkyTrain and campus will be nearing maximum capacity.

Funding for the estimated $3.8 billion project still needs to be worked out. According to a press release from the City of Vancouver, Mayor Kennedy Stewart plans to discuss the MOU and the project with key decision-makers during his trip to Ottawa in February.