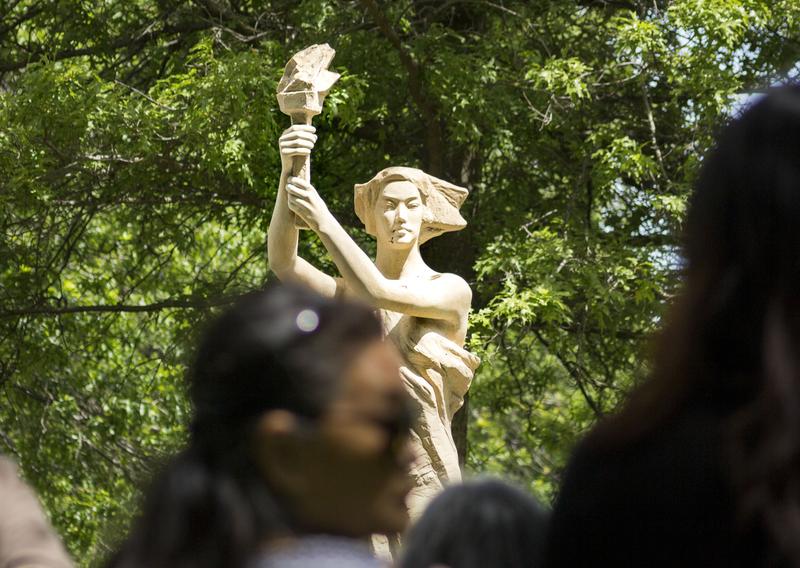 Through the Grad Class Council, run by the AMS Student Life Committee, $5,000 from the graduating class of 2019 will be put towards the upkeep of the statue. Zarrin Tasnim Binte Moin

On June 2, nearly 50 people gathered before the Goddess of Democracy statue nestled between the Life Building and Brock Hall to remember the Tiananmen Square Massacre on its 30th anniversary.

June 4, 2019 marked 30 years since Chinese soldiers open-fired on a group of pro-democracy demonstrators at Tiananmen Square in the nation’s capital. The event has made its mark on campus through the Goddess of Democracy statue, which was created in 1991 by the AMS, Chinese Students and Scholars Association and Vancouver Society in Support of the Democratic Movement (VSSDM) to commemorate the event.

On the afternoon of the 30th anniversary students and community members joined together for a wreath-laying ceremony, co-hosted by the AMS and the VSSDM.

AMS President Chris Hakim opened the ceremony with a short speech on the importance of remembering the violence 30 years later, and maintaining support in democratic institutions.

VSSDM Chair Mabel Tung, a long-time member of the organization, then expressed sorrow for the violence in the past and hope for democracy in China’s future.

She also expressed solidarity with repetition of the phrase “we see you.”

Tung made clear that this gathering was more than a memoriam of previous violence, but also a commentary on contemporary Chinese politics, with her references to the ongoing persecution of the Uyghur minority in northwest China, the occupation of Tibet and the 2014 protests against Chinese “pre-screening” of Hong Kong chief executive candidates. And she wasn’t alone.

After Tung, a number of speakers, including former Burnaby North MLA Richard Lee and history Professor Emeritus Diana Lary, expressed their sorrow for the lives lost 30 years ago and shared thoughts on the current political climate in China.

Towards the end of the ceremony, a VSSDM member approached the microphone with five large sheets of paper in hand, each with a caricature of a different “paramount leader” of the People’s Republic of China. Speaking passionately in Chinese, he laid the caricatures down at the feet of the Goddess, with the crowd becoming more animated as he spoke.

The ceremony concluded with many of the attendees placing a yellow carnation at the statue’s feet. By the end of the ceremony, dozens of vibrant flowers lined the base of the statue.

While the statue has not enjoyed much upkeep during its time on campus, Hakim says the AMS is looking to change that.

Through the Grad Class Council, run by the AMS Student Life Committee, $5,000 from the graduating class of 2019 will be put towards the upkeep of the statue. Part of this fund included a thorough cleaning prior to the event.

“With the allocation of the money from the grad class fund towards the Goddess of Democracy statue, our Student Life Committee has considered this as a project of importance and we’re hoping to continue the maintenance of this statue in the future as well,” Hakim said.