‘It really makes us feel like we’re not alone’: UBC community mourns Tree of Life victims at vigil 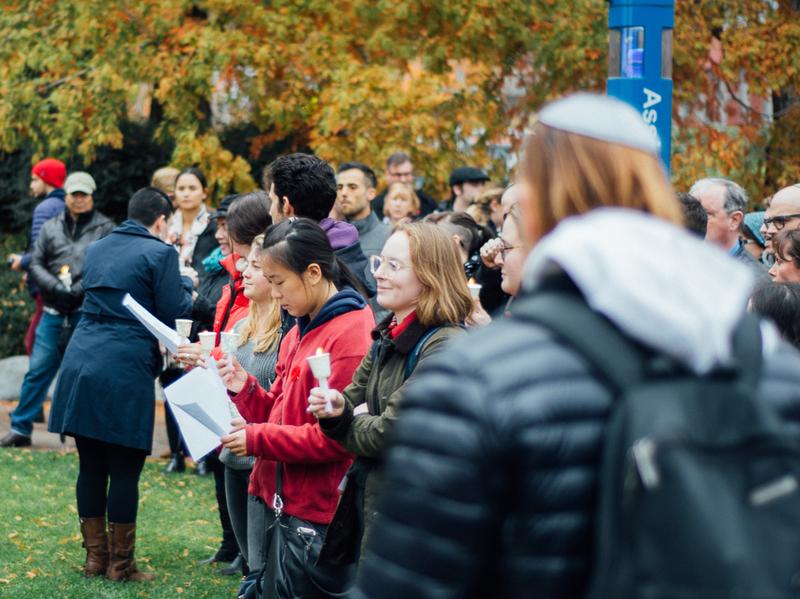 Hillel BC and the campus community held a vigil yesterday afternoon to commemorate the victims of the Tree of Life synagogue shooting in Pittsburgh earlier this week.

With around 70 people in attendance, the vigil offered a space for UBC community members and leaders of various faiths to express their grief and stand with the 11 people slain.

Rabbi Philip Bregman, who opened the vigil, stressed the need for coexistence.

Gabby Switzer, a fifth-year arts student, spoke about how this particular shooting has struck “a deeper chord” with her because the victims were killed while doing something familiar to her.

But she also acknowledged the need to show the same solidarity when other groups are targeted.

“Our LGBT and Black communities, both intersectionally and otherwise, our Muslim and Christian and Indigenous siblings, have stood up for us and with us during this time,” she said.

“And I’m so grateful to know this collective solidarity exists amongst our groups.”

Other speakers reiterated the message about the importance of friendship, while participants held candles and sang prayer songs that were included in pamphlets. Bregman then closed the vigil by leading the crowd in prayer with the Kaddish, hymns of praises to God.

“A lot of different community members came, all sorts of communities, all sorts of backgrounds,” said Tanya Mordkovich, Hillel BC’s program coordinator and an organizer of the vigil.

“I’m really thankful to all the people who reached out to us and it really makes us feel like we’re not alone.”

This article has been updated to include Gabby Switzer’s full name.