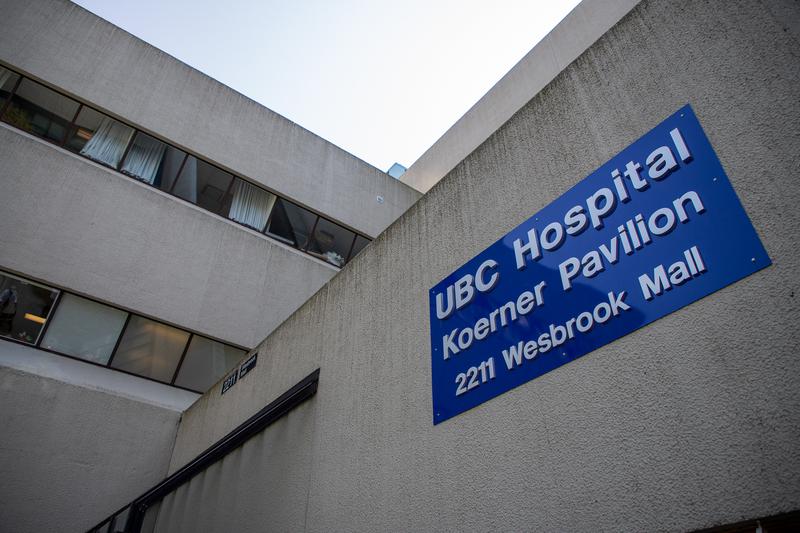 According to Liu, most instances of mistreatment occur on rotations, when medical students are placed on training sites under the administration of their preceptors, senior doctors who supervise students. Zubair Hirji

Compared to those at other schools, UBC medical students face an above-average level of mistreatment and harassment. The faculty is now implementing new measures and scaling up pre-existing ones to address the issue.

According to survey data collected by the Association of Faculties of Medicine Across Canada (AFMC), reports of mistreatment and harassment in UBC’s medical school are higher than Canadian national averages.

Every year, the AFMC collects data from graduating medical students on their medical school experience and sends the national averages back to universities.

While this data is usually kept private, an internal memo released within UBC and obtained by the Vancouver Sun shows that these numbers reveal higher instances of public humiliation, racially or sexually offensive remarks and unwanted sexual advances in UBC than those reported in other medical schools across Canada.

John Liu, third-year medical student and president of the Medical Undergraduate Society (MUS), cautioned that the data collected might not be as straightforward as it seems. Although 60 per cent of students reported experiencing public humiliation, they were asked to rank it on a 1-5 severity scale.

Dr. Deborah Money, executive vice-dean of the faculty of medicine, is not entirely sure why the numbers so high, claiming they may be inflated for other reasons.

“The question is whether it's a recording issue — whether our students are more aware and more coached on things that are inappropriate and are reporting it — or whether the actual situation is more concerning here,” said Money.

But she emphasized that the faculty is still tackling the issue head-on.

“Regardless of whether it's higher or not, it is being reported,” she said, “and it's something that we're very concerned about and taking very seriously.” 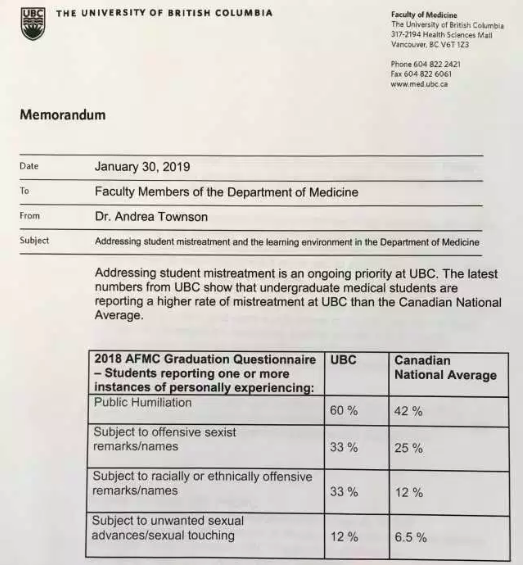 ‘An additional layer of hostility’

According to Liu, most instances of mistreatment occur on rotations, when medical students are placed on training sites under the administration of their preceptors, senior doctors who supervise students.

Liu admitted he has experienced the issue of mistreatment first-hand at UBC’s medical school, but he has worked with the faculty to address the problem as MUS president.

“Personally, I think I've been lucky in that I haven't personally experienced anything severely harmful, but I can say that a lot of my friends have,” Liu said. “I've heard of things even this year where preceptors have made racist comments or sexist comments.”

He added that it is fairly common for preceptors to embarrass or humiliate students in front of large groups for mistakes or slip-ups.

Because of the significant power imbalance between students and preceptors, it’s difficult for students to address inappropriate comments in the moment. He believes that some preceptors do not realize how vulnerable their students are to verbal abuse, exacerbating the stress of medical school.

“It gets to a point where it's a little too extreme,” Liu said. “There are ways to effectively teach students without humiliating [them]. You don't have to do it in front of a large group, you don't have to make it a personal insult.”

According to Dr. Jennifer Berdahl, a UBC professor of sociology who specializes in organizational culture and sexual harassment, mistreatment not only damages the well-being of students, but also their performance in the field.

“The kind of things that students grapple with are incredibly stressful on their own,” she said. “Adding an additional layer of a hostile, socially-dysfunctional work environment is only going to hurt their performance as medical professionals.”

Reporting and addressing the issue of mistreatment only becomes more complex given its normalization in the medical field, explained Liu.

“[Preceptors] apparently always talk about how they were embarrassed when they were trained, and that's what made them learn and become good doctors,” he said “So in their perspective, this is just a rite of passage in medical school.”

Reporting mistreatment only gets more complicated when students feel it could impact their professional trajectory.

“Something that I've noticed is that a lot of students don't want to report because they're worried that it's going to actually harm them,” said Liu.

Berdahl agrees, while also pointing out the gender imbalance that exists in STEM fields.This can also play into the higher reports of sexual harassment that are found not just in UBC, but across medical institutions in North America.

“So you add these gendered layers on top of an already institutional power imbalance and that’s where you get … context for sexual harassment.”

Berdahl believes that this shapes women’s place in the workforce, discouraging them from pursuing medicine as a career and playing into the skewed gender imbalance in the field.

“A lot of what we see is continued segregation in [STEM-related] occupations caused by men making environments very uncomfortable for women to be in, and then women seeming to choose not to be in those environments,” she said.

“So this is a free choice, but in reality, they're being pushed out or discouraged from being in these environments.”

While the issue of mistreatment in medical schools is hardly unique to UBC, the faculty has doubled down on its efforts to improve its learning environment with three main initiatives.

According to Money, the faculty of medicine aims to better communicate the specific processes that it has in place to address mistreatment.

“We tell the students at the beginning of every year,” she said. “We also have it on our medicine website, where they can understand the flow sheet of who they should go to for different complaints, depending on the nature of it.”

The faculty of medicine has also set up a dean’s task force to investigate ways to improve training site and classroom learning environments.

“The task force was generally an approach … to really try to prevent a situation where any of our learners would have inappropriate experiences,” said Money.

“So now there's an actual mechanism for students to go online and report when something happens,” said Liu. “Previous to this, there was no clear way to do this.”

“We want them to be able to report in a way that makes them feel safe,” said Money.

The faculty of medicine also launched the Undergraduate Medical Education (UGME) program in 2018, which monitors students’ learning environment. The UGME frequently communicates with department heads, professors and students to ensure a healthy learning environment and to address the problem of mistreatment.

When a preceptor or professional in the program is flagged for mistreatment, the faculty of medicine may intervene on a one-on-one basis, following the Vanderbilt Professionalism Feedback Pyramid on their website. These interventions vary in severity. According to Liu, most preceptors are receptive to change after an informal conversation.

But in cases when their behaviour continues or is particularly egregious, the UGME has gone as far as to remove preceptors from teaching as a last resort.

“[Removing preceptors from teaching] is a rather extreme measure,” Liu said. “It goes to show that [the UGME] is really trying to counteract [mistreatment].”

While UBC declined to comment on the preceptors removed from teaching due to privacy law, Money affirmed the faculty’s commitment to addressing mistreatment against students.

“This process includes working with faculty to ensure they are aware of and following our guidelines around teaching, which can lead to changes or temporary withdrawal of teaching assignments to ensure the student/trainee environment is optimized,” wrote Money in an emailed statement to The Ubyssey.

“I don't want this to be...taken to the point where people feel that there isn't anything being done,” Liu stressed. “Because there has been a lot of mobilization of faculty to try and counteract these issues.”