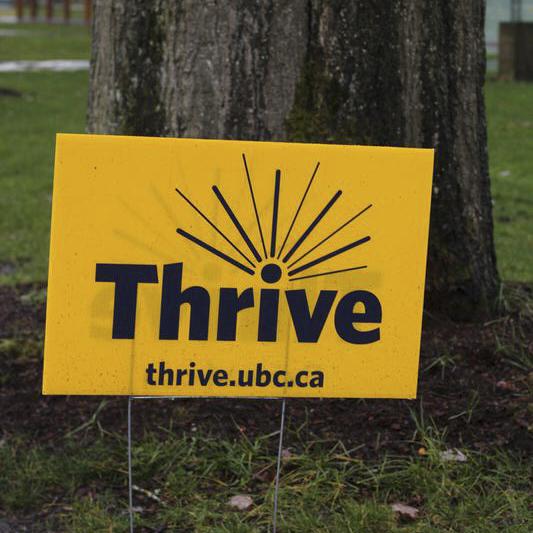 With exams just around the corner, UBC Thrive is back with a series of events aimed at promoting mental health literacy, reducing stigma and creating a supportive campus culture.

The events range from spin classes to jazz concerts to meet-ups with clinical staff on campus, and all community members are invited to participate.

“We want to ensure that students, staff and faculty have the resources that they need to help them understand mental health issues, improved coping skills and to build mental health whether they're living here, learning here, working here [or] essentially spending their time on campus,” said co-chair of Thrive Miranda Massie.

Since its founding nine years ago, Thrive had always been a week-long series of events. But this year, the campaign has been extended to be a whole month to align better with other existing mental health campaigns, while providing more opportunities for groups on campus to participate.

“Part of us moving Thrive to a month was to try and align it better with the other existing campaigns that were happening on campus,” said Massie, citing Move UBC in February and Nutrition Month in March.

She added that the longer period allows groups to better schedule their events in alignment with their schedules or other initiatives on campus.

“The campaign itself is really intended to recognize that everyone has mental health, and everyone is at different stages along the mental health spectrum,” said Massie.

But Thrive is one of many mental health initiatives at UBC aimed at supporting the mental health and wellbeing of the UBC community, said Massie.

A large emphasis of the campaign is promoting the Thrive 5, five techniques for maintaing good mental health: moving more, sleeping soundly, eating well, giving back and saying hi, the last of which refers to spending time with friends, family, and the people in your community.

The AMS is a partner of Thrive month and has been hosting various events as part of the month-long campaign.

“Often, I think students feel that their challenges or the issues that they face are not significant enough to reach for support. And I think, the discussion and the dialogue that Thrive produces allow students to be more open about [saying] ‘You know what, I am struggling too, and that's okay,’” said Sherkarlab.

Mental health for the long run

AMS Student Services Manager, Ian Stone, said the AMS is always looking to adapt to the changing needs and demands of students at UBC.

“We are looking to provide services that are in demand, so that people actually want the services that we're giving. And make sure that they're low barrier so that anyone can access them.”

He pointed out that Speakeasy’s location changed from the first floor to the third floor of the Nest to make the space less public and intimidating to approach. Stone added that Vice, the AMS’s service for drugs and alcohol education and support, is boothing outside the Nest and by the Woodward building.

“With that they were able to reach people who don't normally come to this building. Very simple, very easy thing, but it was able to engage a very diverse population,” he said.

Dr. Dan Cox, an associate professor in the department of educational and counselling psychology, and special education, said there are various structural barriers for individuals seeking advice on mental health, one of which is a lack of awareness about services available to them.

“[Mental health services] may be somewhat centralized, but it’s not necessarily super easy to just go to one place to get the resource for everything … I would guess that one of the values of Thrive is just sort of a concerted effort to make the student body aware of what's available because there is so much available.”

According to Cox, Thrive 5 are healthy habits that will help individuals build resilience for times of intensified distress.

He explained the Thrive 5 can be thought of in a stress and coping framework, where a person’s response to a life event is a combination of how intense a stressor or life event is and a person’s psychological distress that influences how they respond to that event.

“… Sleeping well, eating well, exercising, having good relationships, those sorts of things — those can be thought of as stress buffers. Those are things that build up your armour, so when the stressor hits, you can respond more adaptively,” said Cox. “Particularly for university life, those five areas and taking care of those things are incredibly beneficial.”

“I think particularly in university, … you're not sleeping well, you're not eating well, you're drinking too much … That can become the cultural norm, the expectation … and it's so bad for you,” Cox said. “It's like setting yourself up to fail.”

Despite acknowledging the benefits of the Thrive 5, Cox said they won’t always be enough for everyone to maintain their mental health.

“We all have our predispositions or challenges or things that we struggle with that at certain times, the volume can get turned up; they can get sort of out of whack,” said Cox. “[But] if we can help folks maintain their physical selves, then we can work more on that more underlying stuff,” Cox said, referring to an individual’s predispositions.

One of the main goals of Thrive month is reducing stigma around mental health, which Cox said is especially valuable when the Thrive 5 is insufficient for dealing with an overwhelming stressor.

“But when it gets turned up [to the point] where you're not living the life you want to, when you're stuck in your dorm room and all the sheets are pulled and you can’t get out of bed … that's when there's value in going getting professional support,” said Cox.

“And if you do reach out and you don't feel like whatever you did was helpful or you [didn't get] what you wanted [out of it], just go reach out to somebody else.”

Thrive will be hosting daily events on both Vancouver and Okanagan campuses until November 30, partnering and engaging with departments, faculties, student societies, clubs and organizations.