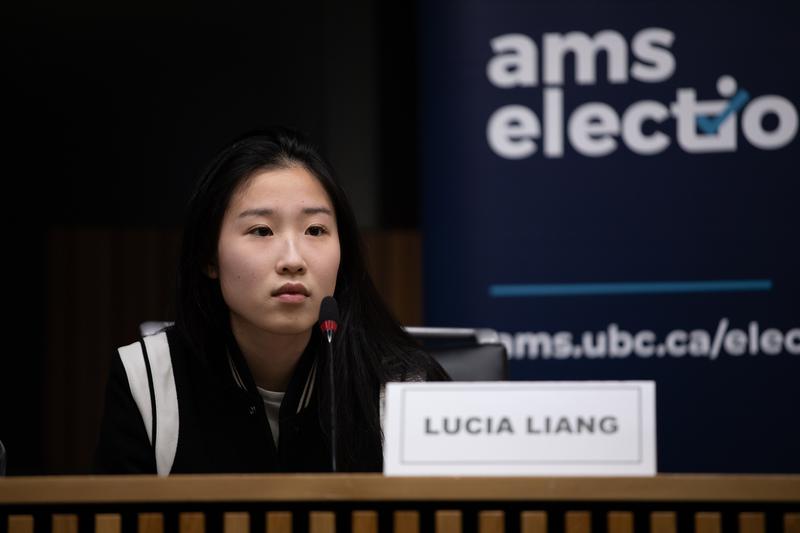 The debate was more of a Q&A session, centred around fiscal responsibility, affordability and the AMS budget. Zubair Hirji

Without challengers, current AMS VP Finance Lucia Liang made fast work of Thursday’s debate for re-election. She flashed operational know-how one can only learn on the job, but also evaded some of the audience’s more hard-hitting questions.

The second-year arts student is seeking re-election as the only candidate in the VP finance race this year. The debate was more of a Q&A session, centred around fiscal responsibility, affordability and the AMS budget.

Liang emphasized the importance of fiscal responsibility and protecting investments, although she seemed open to change.

“We absolutely should not put [the AMS’s investments] funds at any risk because they're our students’ money and we cannot bear the burden of losing that money, so security is at the number-one forefront,” she said.

Later in the debate, however, Liang responded to a question about the fossil-free equity fund where the AMS recently invested its endowment and how it still contains a number of high-emissions industries. She didn’t answer with much detail, saying that she’s pushed for more investments into companies with sustainability initiatives, as well as Canadian-owned companies.

She also failed to clearly answer a question about whether she would take on any big initiatives, especially given that the AMS has ended recent fiscal years with operating surpluses.

When discussing the AMS’s surplus later, Liang was again cautious, emphasizing balance while referencing some ideas brought up in an AMS Council discussion about the budget on February 26.

“It’s always [about] finding a balance between prioritizing the needs of our current students to help with their financial burden, to help [with] what they need to accomplish their goals, as well as looking into the future,” said Liang.

Despite the fact that affordability is one of the major themes of her platform, Liang wasn’t entirely clear on how she would ease financial insecurity when asked.

She did speak about a planned increase in wages for students who are employed by the AMS, saying that the HR team is already examining student wages given the upcoming increase to the minimum wage — but this is mandated by provincial law.

“We want to provide them with the opportunity to learn, to experiment, as well as giving them financial aid,” she said.

By the end of the night, most of the earlier crowd for the senate and VP administration debates was gone. After a few questions from the audience, Liang made her closing statement and reiterated her hope to continue working in the finance portfolio.

“My team and I were able to accomplish many, many things to serve the students,” she said. “And I continue wanting to do that this year and to bring initiatives, to bring ideas, to bring the care and support that my team [was] able to provide last year.”