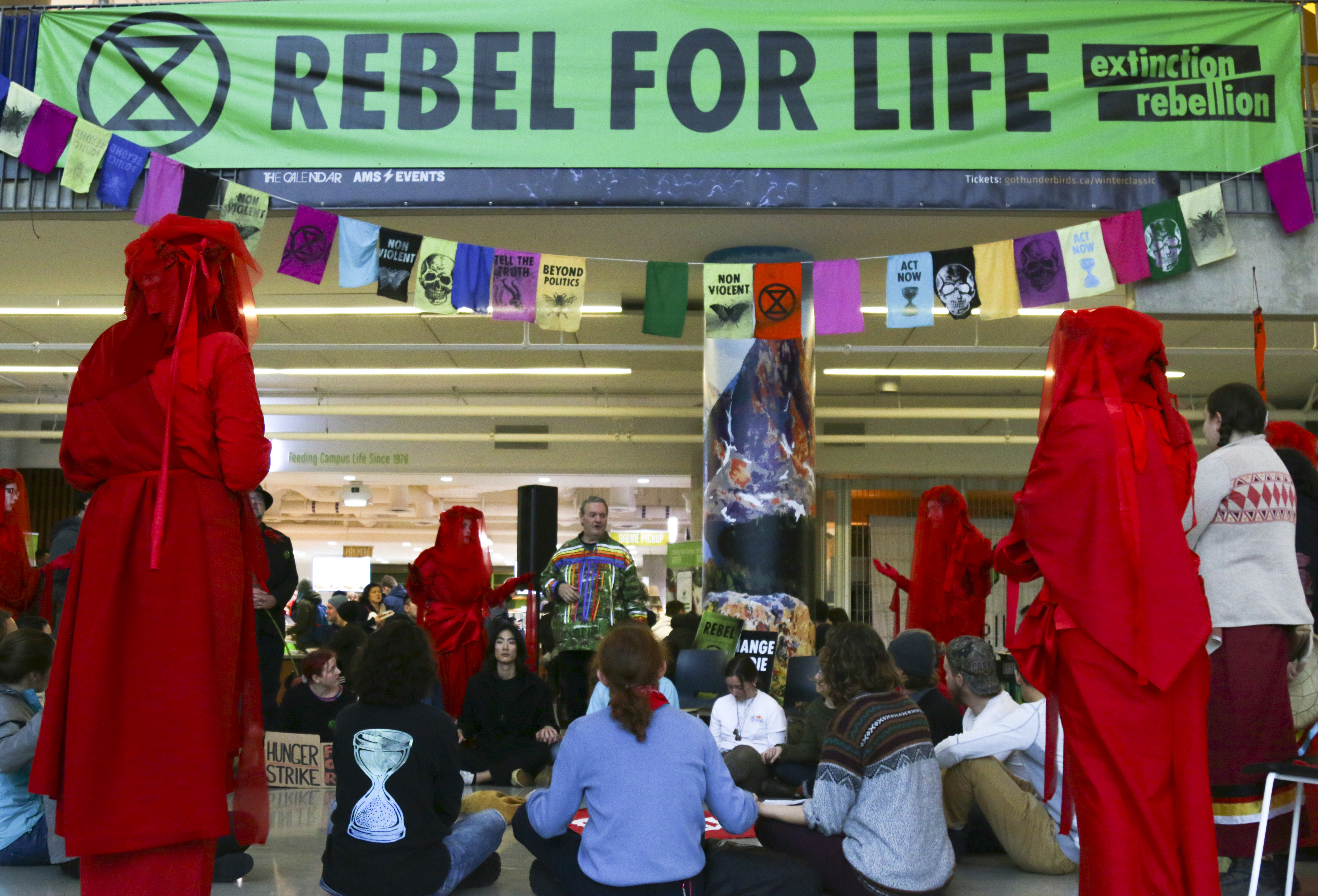 Eight students are going on a hunger strike demanding that UBC commit to a “full and immediate divestment from the fossil fuel industry” and denounce the industry’s role in exacerbating the climate crisis.

After the UBC Board of Governors (BoG) committed to fossil fuel divestment and declared a climate emergency in December, student climate action group Extinction Rebellion UBC (XR UBC) took their activism a step further by beginning a hunger strike on January 6.

The groups began their strike — including eight fasting students — with an elaborate ceremony in the lower atrium of the Nest. The group is asking for a well-publicized statement from UBC that would commit the university to a “full and immediate divestment from the fossil fuel industry” and denounce the industry’s role in exacerbating the climate crisis.

Liam Gannon, a second-year urban forestry student, decided to strike as a gesture of solidarity with those who are disproportionately affected by the climate crisis.

“I found out about how all of the deadlines that we've set to take climate action will not protect a lot of the world's most marginalized and vulnerable communities, and that we as privileged nations that can take action aren’t taking action necessary to help out other neglected nations,” he said. “It's about climate justice, and it's about ensuring we're not just taking care of ourselves, but we're taking care of the world and the earth.”

According to Gannon, the eight students taking part in the fast met that morning for a small meal of “fruits and veggies.” They’ll be taking vitamin and mineral supplements and meeting with health professionals throughout the week to ensure their safety.

“We're going to end before it has permanent health consequences for us,” Gannon said.

Some strikers will attend classes as their health allows, while others are striking from the university as a whole.

“We have decided that that's kind of up to the individual,” said Gannon. “Me personally, I'm taking this as a full strike. So I'm just going to be sitting here and waiting. I won't be attending class. I won't be going online. I won’t be checking Canvas. I won’t be doing anything for school this week.

“I am waiting for UBC to act on climate justice before I continue to participate with the institution.”

As VP Students, Ainsley Carry has been UBC’s primary liaison with XR leading up to the strike. He said that the university has put Student Health Services “on alert” to provide occasional check-ins and emergency care should the students need it.

“Communication with the group from day one since they used the word ‘hunger strike’ [has been] saying ‘what can we do to make sure no one is harmed?’” 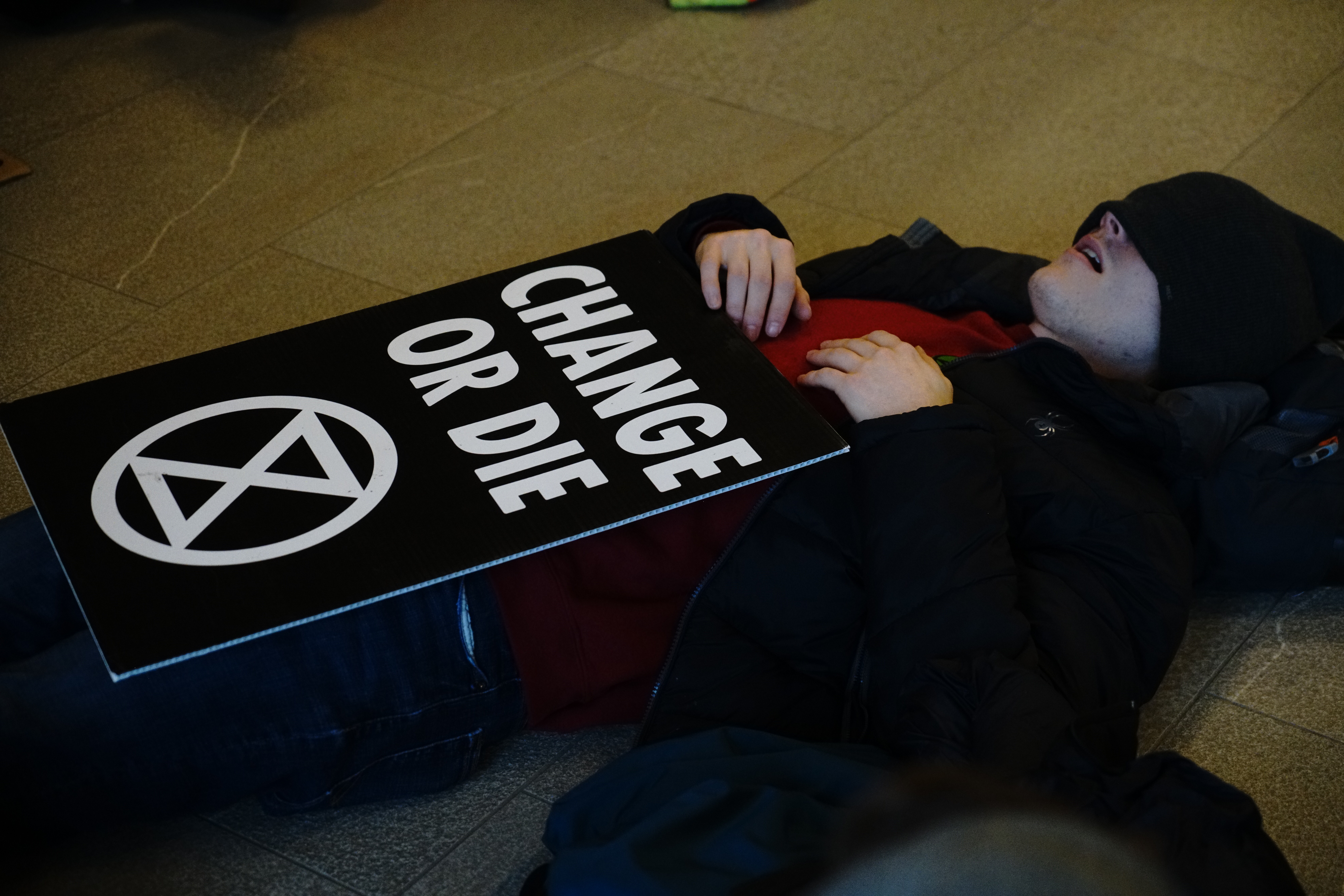 11 people stood up and suddenly collapsed to the ground as a part of a die-in, a form of protest where activists play dead to illustrate the severity of their cause. Elizabeth Wang

At 11 a.m., a procession of XR members entered the building. Students walked arm-in-arm with demonstrators who wore red robes and veils and whose faces were painted white. Another demonstrator beat slowly on a drum as they marched.

They sat in a set of chairs arranged in a circle. One man acknowledged that he was a guest on this land and invited anyone from the Musqueam, Salish or Tsleil-Waututh nations to speak before they resumed the ceremony.

After a number of XR members spoke about the purpose of the strike, 11 people stood up and suddenly collapsed to the ground as a part of a die-in, a form of protest where activists play dead to illustrate the severity of their cause.

The seven people in red walked slowly to each ‘dead’ protester, attending to their bodies and mourning in silence. When a protester invited members of the audience to join in, the group of dead grew to 26.

“We will show respect to everyone,” began one speaker, asking the audience to repeat after him. “To each other, the general public and to the government and police. We engage in no violence, physical or verbal, and carry no weapons. We hold ourselves accountable to our actions, and do not hide from the legal consequences.”

After the die-in, the protesters invited all to participate in drum circle where they sang together and led discussions about the climate crisis.

Carry said he was impressed by the demonstration and is working to meet the students’ demands.

“They were very articulate about their interests and their ideas, and they were able to capture all this tension in a kind of impromptu performance. I’m really proud of the work they put into it,” said Carry.

“My goal is to make sure that our statement gets the media attention it needs so that students feel comfortable ending their strike.”

In a written statement to The Ubyssey, BoG Chair Michael Korenberg said the Board appreciates the work of student climate activists and hopes UBC's recent work on divestment will highlight to student protestors the university's commitment to divestment.

“Throughout this work, we’ve corresponded frequently with Extinction Rebellion to ensure they understand that a hunger strike will not expedite the critical due diligence we must undertake. We urge our students to continue to advocate for action on climate change in ways that will not compromise their health and wellbeing.”

‘Leaving students with no choice’ 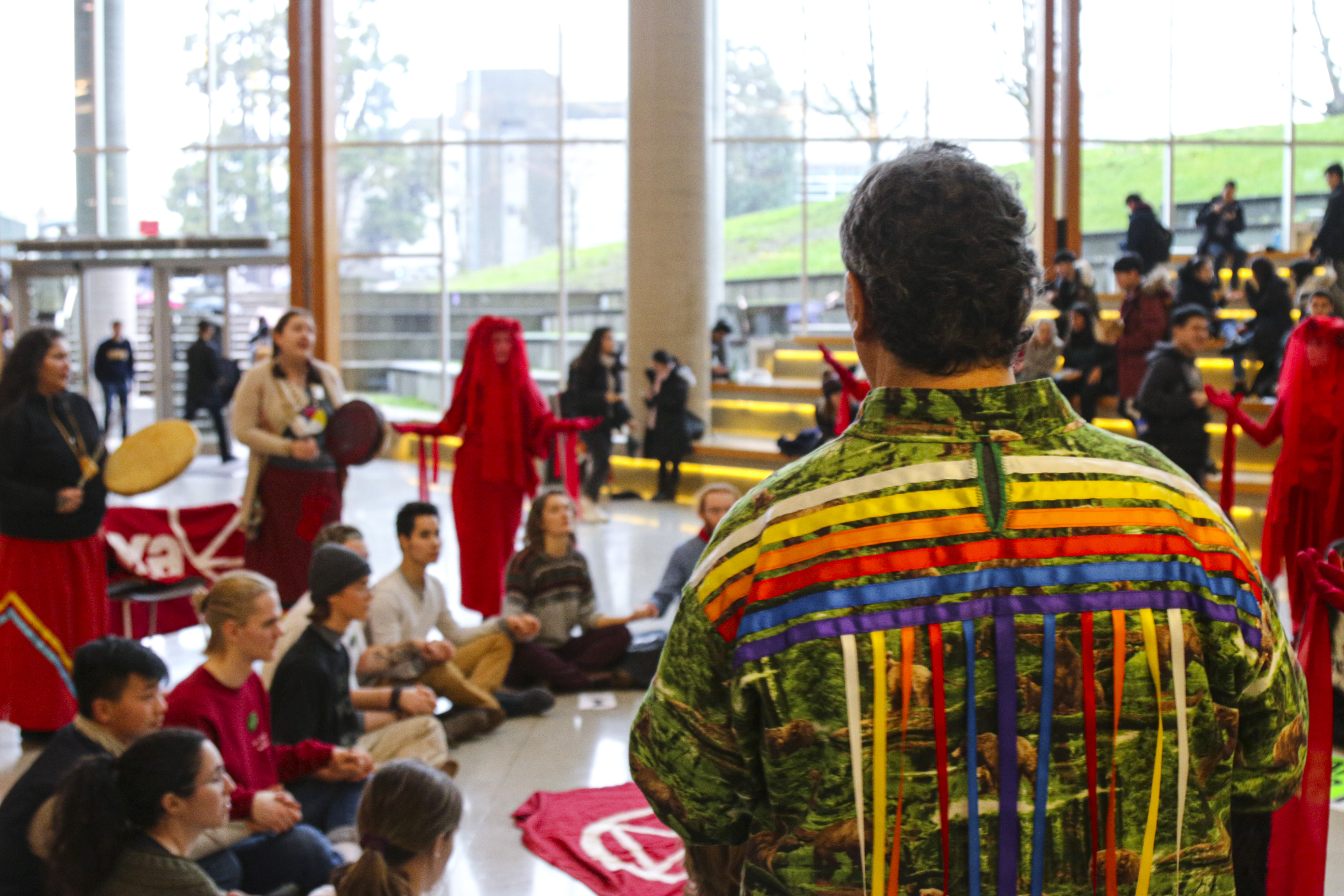 After the die-in, the protesters invited all to participate in drum circle where they sang together and led discussions about the climate crisis. Diego Lozano

XR UBC announced the plan to hunger strike back at the Board’s Endowment Responsible Investment Policy Committee meeting on November 22. There, the Board voted to approve a plan that would divest 23.5 per cent of UBC’s $1.75 billion endowment following the completion of legal and asset-liability studies.

At the December 5, 2019 BoG meeting, President Santa Ono declared a climate emergency and announced the creation of a Climate Emergency Advisory Committee to undertake a consultation process that would help inform UBC’s response to the climate crisis.

The declaration also included a provision that the Board’s new Sustainability Committee will explore full divestment from fossil fuels.

But according to XR UBC, the climate emergency declaration lacked “commitments to further actions.”

“UBC’s administration has not met XR’s demands, leaving students with no choice but to follow through on their threat to hunger strike,” reads a statement XR UBC released on January 5.

The UBC VP Finance and Operations website issued a written statement on January 3, where the university confirmed they were committed to full divestment but wanted to ensure they upheld their fiduciary duty as a publicly funded university and mitigated financial risk.

“UBC is committed to full divestment as soon as possible, and we are taking the necessary steps to realize this commitment now,” reads the statement.

UBCC350, a student climate activist group who has been at the forefront of the divestment movement at UBC, issued its own release about XR’s hunger strike.

“While we acknowledge that Extinction Rebellion UBC begins their hunger strike today in hopes of expediting the divestment process, we know that the real victory for the divestment movement is already won,” they wrote.

This article has been updated to include comments from the Board of Governors Chair Michael Korenberg.