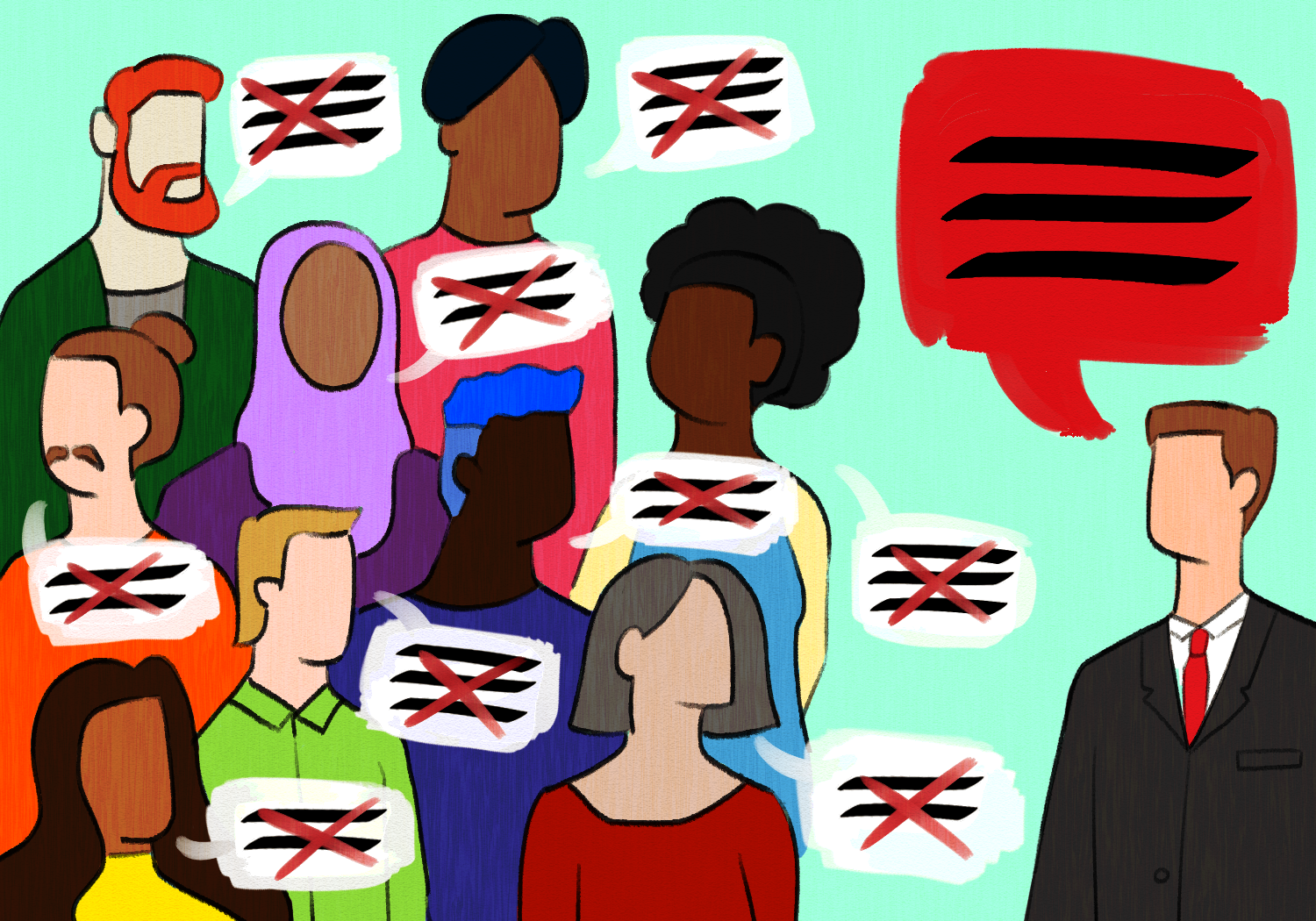 The university’s academic freedom statement hasn’t been revised since its inception in 1976. Irene Zhang

After UBC denounced racism, community members are skeptical with the university’s past behaviour of allowing far-right speakers on campus — which it justifies with an academic freedom statement that hasn’t been changed since 1976.

In light of Black Lives Matter protests worldwide, President Santa Ono’s statements denouncing anti-Black and anti-Asian racism and outlining goals to combat discrimination have been met with skepticism from members of the UBC community.

Ono’s statements raised questions about UBC’s past decisions to allow several far-right speakers to come to the Vancouver campus, whom critics have described as promoting racist or otherwise discriminatory speech.

“[UBC] allowing speakers like that shows that it aligns itself with the racist systems that they are also speaking against. So there’s a contradic[tion] in terms of words and actual institutional decisions,” said Wallace.

Free speech groups often use the university’s statement on academic freedom to defend the various speakers whose events have been allowed to take place, despite growing concerns that they could incite harm on campus.

Not having been revised since its inception in 1976, UBC’s statement defines academic freedom as an individual’s right “to pursue what seems to them as fruitful avenues of inquiry, to teach and to learn unhindered by external or non-academic constraints, and to engage in full and unrestricted consideration of any opinion.”

However, Dr. Emma Cunliffe, associate professor at the Allard School of Law suggested that academic freedom should be interpreted as described by Justice Lynn Smith in her 2015 report.

“Someone who just makes a commercial room booking, such as Mr. Jenn Smith, is not entitled to any claim to academic freedom — they are entitled to free speech in the same way as any other person.”

Cunliffe emphasized that the pursuit of truth is what differentiates freedom of expression from academic freedom. She pointed out that free expression is not “purpose driven,” such that an individual could say something that was evidently false and claim that they were exercising their freedom of speech. However, since the individual’s statements were not based on scholarly methods, they aren’t protected by academic freedom.

In a written statement to The Ubyssey, Provost and VP Academic Andrew Szeri said it was important that UBC “uphold its commitment to academic freedom,” even if the views of campus speakers do not represent those of the university.

“Our 1976 Senate Statement on Academic Freedom … outlines why ideas, even those which are seen by many or even the majority as unpopular or abhorrent, must be allowed to be discussed, debated and challenged within the University's forum,” he said.

Szeri also highlighted UBC’s dedication to the principles of equity and inclusion included in the university’s strategic plan, Shaping UBC’s Next Century, but did not say how academic freedom and equity worked together.

In her paper summarizing the university’s institutional responsibilities regarding academic freedom and free speech, Cunliffe illustrates that because there is no hierarchy of rights and freedoms, one’s freedom of expression may be entitled to stronger or weaker protection depending on whether their statements advance or undermine another individual’s right to substantive equality.

“[This] is to say that racist statements will be weighed against the harm that they [cause] in deciding whether it’s entitled to the protection that freedom of expression gives.”

Aside from this, Cunliffe pointed out a particular ambiguity in UBC’s statement on academic freedom.

When deciding whether someone qualifies for academic freedom, such as anti-sexual orientation and gender identity speaker Jenn Smith, Cunliffe explained that uninvited guests like Smith may not fulfill the criteria.

“When it comes to any message that is hate speech, then it should be stopped.”

“The academic calendar refers to members of the academic community and invited guests. And so someone who just makes a commercial room booking, such as Mr. Jenn Smith, is not entitled to any claim to academic freedom — they are entitled to free speech in the same way as any other person.”

For Wallace and Odhiambo, it’s not only a matter of who is allowed to speak on campus, but what they are allowed to promote.

“You can let whoever speak,” said Wallace. “But if you don’t acknowledge the hypocrisy in your actions versus your statements, and your allowance and endorsement of events taking [place] on UBC property … then it doesn’t really matter who you let speak.”

Odhiambo felt the same way: “When it comes to any message that is hate speech, then it should be stopped.”

An open letter addressed to President Ono that called for university administrators to amend the academic freedom statement to align with recent anti-racist commitments has already garnered hundreds of signatures from students, staff, faculty and alumni.

However, in an interview with The Ubyssey last fall, Cunliffe said she didn’t feel as though the statement needed to be amended. When asked if she still felt this way, Cunliffe agreed, saying that instead, “we’d be better served establishing policies for how we interpret that statement.”

“The policy that we have currently at UBC was instituted in 1976 and [it] just makes sense to me that these things be reviewed as we move along. So, I think it’s good that we do have another look at that,” he said.

“I myself believe in freedom of expression and think that we want to make sure that we don’t censor. At the same time, I think it is the case that sensibilities change and people need to think a bit about it.”

Guppy also mentioned the Chicago principles, which college campuses in the United States use as a guide to fostering the free exchange of ideas. Included in the principles is the idea that the concept of free speech will be tolerated “so long as it doesn’t undermine … the proper functioning of the university.”

“I myself believe in freedom of expression and think that we want to make sure that we don’t censor,” said Guppy. “At the same time, I think it is the case that sensibilities change and people need to think a bit about it.”

Dr. Margaret Schabas, current academic freedom senior advisor to the provosts, presented her interpretation and advised the Board of Governors at a June 16 meeting. In the discussion, several governors agreed that the university needed to reconcile academic freedom with community members’ equality rights.

Board student representative Jeanie Malone characterized it as a matter of UBC’s workplace obligations to its employees and human rights obligations to all students and faculty. “I think it has huge optical impacts on the university itself,” she said at the meeting.

“We as a university community … don’t seem to be making great progress on the question of how we protect and advance the substantive equality of racialized students, LGBTQ students, women, and feminists and other groups who’ve been marginalized while also protecting and advancing academic freedom,” she said. “And I think that lack of progress reflects a lack of will on the part of university administrators to actually establish and commit to having clear guidelines.”

Wallace and Odhiambo also acknowledged the work that needs to be done, calling for more Black counsellors, more Black people in positions of power and better funding for Black studies programs.

“Black Lives Matter is not a movement, it’s life,” said Wallace. “It’s people’s livelihoods … and universities and institutions can only claim that statement when they actively recognize what non-Black people already have granted to them.”