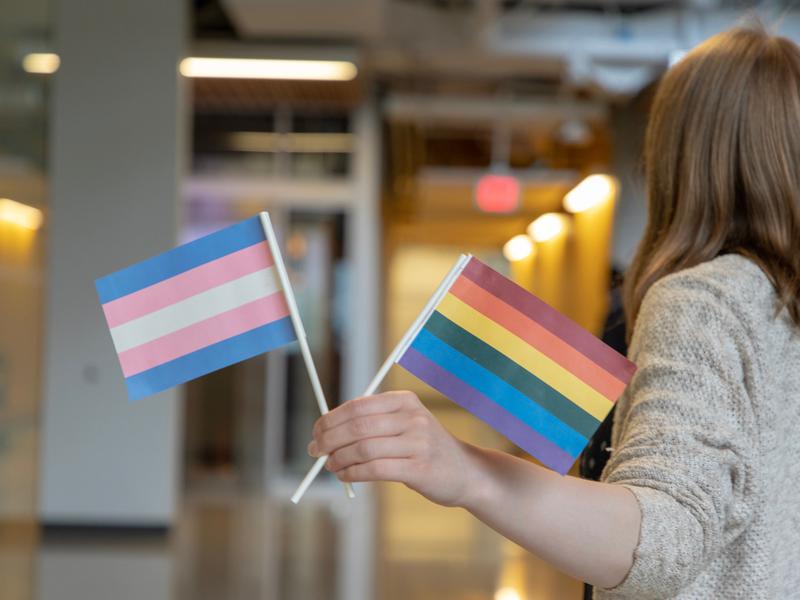 His talk at UBC prompted widespread backlash and got the university pulled from this summer’s Vancouver Pride Parade. File Zubair Hirji

Ahead of UBC’s September 6 Pride event, social media activities of a well-known anti-SOGI speaker and members of an anti-immigration group raised concerns among the campus community about their possible presence at the event.

UBC said it is prepared to maintain a “safe and positive space.” But some students are unconvinced and want to push for policy changes, citing the university’s track record of hosting speakers that make different communities feel threatened.

On August 24, anti-SOGI speaker Jenn Smith posted on Facebook about potentially attending UBC Pride — which is located in the same area as a talk he hosted in June — and needing “some big guys to escort” him.

“I thought the location chosen was a little symbolic like they're trying to send the message based on the sort of the kerfuffle that I caused there this summer,” Smith said to The Ubyssey. His talk at UBC prompted widespread backlash and got the university pulled from this summer’s Vancouver Pride Parade.

His possible attendance at the event tomorrow would not be by any campus group’s invitation.

In response, a number of Soldiers of Odin (SOO) members — including Vancouver Island chapter President Conrad Peach and Fraser Valley chapter President Brian Baxter — tagged each other in the post’s comment section. 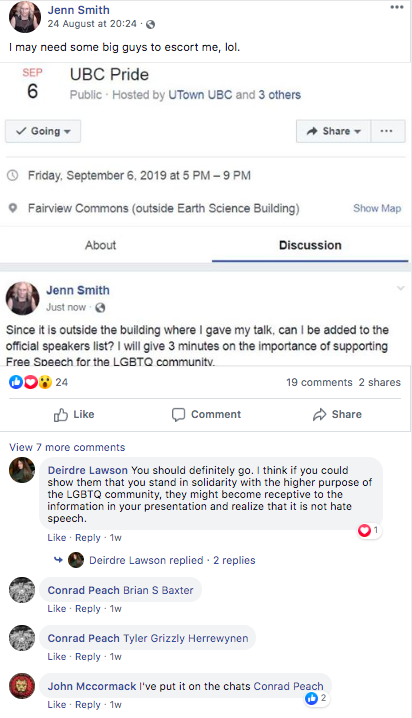 Currently, it’s unclear whether Smith will attend the event. Screenshot via Facebook

A far-right, anti-immigration, anti-Muslim group known for street patrols, SOO was started by a white supremacist in Finland in 2015 before spreading to Canada. A 2016 intelligence bulletin by the Canada Border Services Agency reported that “some members adhere to extreme right-wing ideology and are not afraid to use violence to achieve objectives.”

Since then, different Canadian SOO chapters have splintered or attempted to rebrand as community groups. But there are still reports of SOO members expressing extreme anti-Muslim sentiments on social media.

Currently, it’s unclear whether Smith will attend the event.

Smith added that he has not received any confirmation from the SOO members, but he thinks it would be unlikely for them to attend on their own. He also denied having connections with the group despite noting he has received protection from SOO members at previous events.

“For them to come with me to the Pride event there at UBC, and had they offered to do so, I probably would decline,” Smith said, despite the tags. “I certainly would not show up with them, wearing their colours.”

Amidst this uncertainty, UBC Students Against Bigotry (SAB) said it is working to alert the university on social media instead of taking direct action.

“We’re trying to highlight to the administration that this might be a security concern, and also UBC Pride is supposed to be inclusive and free from any sort of transphobia,” said a SAB member, pointing out that social media activities shouldn’t be disregarded due to their prominent role in violent incidents worldwide.

“There might be some SAB members there during UBC Pride — but as an organization, we do not plan to take any part in protest[ing], if there is any,” added another SAB member who is part of the Pride Collective.

Both individuals requested anonymity to ensure their personal safety.

In a statement to The Ubyssey, UBC Campus Security Acting Director Ali Mojdehi said there are procedures in place to secure the event — but their details can’t be disclosed to avoid security breaches.

“What I can say is that staff and volunteers will all be trained on the event safety plan. As [UBC Pride] is a licensed event, it will be fenced and numbers and access will be monitored,” said Mojdehi.

“In the event that protestors choose to attend, Campus Security staff who are well-versed on the Positive Space goals of the event will provide them with a space outside the event to respectfully voice their opinions without disrupting the event.”

Similarly, the RCMP said it is “prepared” without going into details.

“The UBC RCMP support free speech and the right to protest peacefully,” reads a statement from Constable Kevin Ray. “Should an incident occur which infringes on those Charter Rights, Police are prepared to take any action necessary to protect the public and property.”

But SAB members are skeptical, noting that the university has allowed many events to take place on campus even when they made communities feel unsafe.

“I can just speak for myself, but I feel like the general atmosphere at UBC — especially among LGBTQ+ members — is that the administration does not care about them and it makes us feel excluded,” said the SAB and Pride Collective member.

In these previous events, the university has repeatedly justified its position as upholding its commitment to freedom of expression.

In response, SAB emphasized that the organization is focused on tackling the “systemic issue” by advocating for policy changes at UBC.

In particular, it pointed to the commitments UBC made after being pulled from the Vancouver Pride Parade this summer for hosting Smith. The university has plans to review its booking policy at the Board of Governors level in September and re-start the Vice-Presidential Trans, Two-Spirit and Gender Diversity Working Group.

SAB is also calling on other student groups to speak out as well.

In a statement to The Ubyssey, GSS President Nicolas Romualdi said the society has engaged UBC Board of Governors’s student members and aims to make sure students’ perspectives are included in the consultation for any policy changes.

Besides having support services staff available during the UBC Pride event, AMS President Chris Hakim said the AMS is also reviewing the Campus Safety Vision Statement and the Suspensions and Expulsions from AMS Property policy this year.

But ultimately, SAB said it is relying on the UBC community at large to push this effort forward.

“I think the focus of our work is trying to organize the students and the faculty and staff because that's where the real power of our community lies,” a SAB member said. “If we can come together and look out for each other and defend each other, I think we can push the administration to take our concerns seriously.”