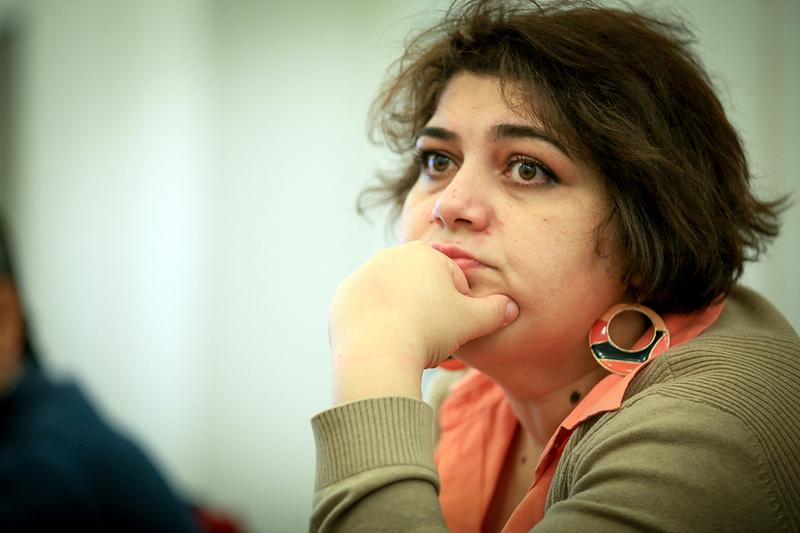 Since its founding in 2012, it has been “one of the world’s largest prizes dedicated to the fight against corruption and [for human rights]” at $100,000 CAD.

For her work exposing corruption within the highest ranks of the Azerbaijani government — including President Ilham Aliyev and his family — she has been secretly recorded, blackmailed and jailed. An intimate video of her and her boyfriend was also posted online after she refused to “behave.”

“It was the most awful thing that could be done to a woman in Azerbaijan,” Ismayilova said in the ceremony’s introductory video.

While she has now been released from prison, she is still under a travel ban and was instead represented by fellow Azerbaijani journalist Kenan Aliyev at the ceremony.

“This is not about the money or this beautiful trophy,” said Aliyev in an interview with The Ubyssey following the ceremony. “It’s about moral support that we need when we feel desperate.

“If you live in Azerbaijan and you cannot even buy the newspaper that is independent because it’s controlled by the government, you get desperate. This prevents us from desperation.”

A prerecorded message from Ismayilova was also played in which she expressed her gratitude for the prize and stressed the importance of international cooperation in the fight against corruption.

“All we can do is be together, stand together against those who are stealing opportunities from their own people and who are trying to silence journalists for uncovering this incriminating truth,” she said.

“I accept this as an acknowledgement of our efforts – not only my efforts but also the efforts of many other journalists who sometimes even cannot put their names on their stories because their families and themselves are subject for government threats and harassments.”

The introductory video on the three finalists

Soliman is an Egyptian lawyer whose work focuses on expanding women’s rights in both the “private sphere and the judicial system,” and in particular through a progressive interpretation of religion. For her testimony against a police killing of a human rights protester, she was also arrested and had her assets frozen.

The Car Wash Task Force is a Brazilian legal group that brought to light the largest corruption case “in the history of Brazil,” which resulted in the recovery of $3 billion and the arrest of “a sitting senator, six former congressmen, a party treasurer and some of Brazil’s most powerful executives.”

However, the nomination of the task force also brought about concerns, as the group has allegedly committed unethical practices including “non-observance of due process, illegal phone taps, coercion of witnesses and use of illegally obtained evidence.”

The concern was briefly alluded to in the ceremony by UBC, but was not addressed beyond this acknowledgement.

And congratulations to all our amazing nominees! pic.twitter.com/5LFcEQwBoR

The event also featured Glenn Greenwald — the journalist who broke the story about NSA whistleblower Edward Snowden — as the keynote speaker.

In his speech, he reflected on his own experiences investigating corruption and spoke at length about the lessions he learned from Snowden’s integrity and strength in the face of government persecution.

He then reiterated talked about the need to recontextualize corruption as an issue that requires international cooperation.

“It tends to be viewed very domestically,” said Greenwald, “and I think one of the revelations of this event ... is trying to make certain that we think about corruption and the people heroically fighting against it as also being international in scope in the way that we ought to understand them.”