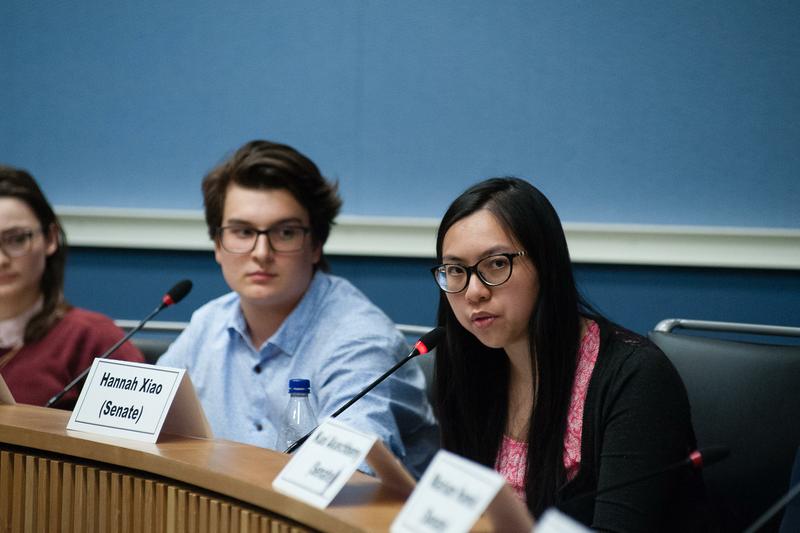 Yesterday’s Senate debate featured this year’s candidates discussing relatively redundant topics, but they managed to distinguish themselves through their qualifications. Max Holmes, Jakob Gattinger and Marium Hamid are running for re-election, while the other four — Jeanie Malone, Matthias Leuprecht, Kuol Akuechbeny and Hannah Xiao — are new to Senate.

The candidates’ opening statements generally revolved around typical themes: affordability, mental health and improved academic accommodations for students. Many candidates also discussed interest in diversity and equity, which will be tackled in the Senate’s upcoming ad hoc committee for Equity and Inclusion.

The opening question asked candidates what the qualities of a good senator were. Many of their answers overlapped one another — listening to students, collaborating with other senators and being knowledgeable about issues in the Senate were all mentioned.

In his answer, Gattinger talked about the importance of commitment.

The candidates diversified themselves when asked about their experience relevant to the role and how it could help them represent students. The three current student senators talked about wanting to continue the progress they’ve already made, while candidates currently holding prominent positions in the AMS or the university — such as Malone and Holmes, who were respectively elected to the Board of Governors and the AMS VP Academic position last year — mentioned those roles.

Other candidates discussed experience in different areas. For example, Leuprecht — a first-year student — talked about working on a youth homelessness strategy for the United Way, running a youth business in Eastern Ontario and getting involved with three clubs at UBC.

“If you try to apply [for a concession] before that exam and you don’t get it,” said Holmes, “you are forced to either make the decision between to take your exam — and if you take the exam you’re not gonna get a concession — or you’re left with the decision of ‘don’t take the exam’ and you either get the concession or you get a zero on your exam. This is a horrible position to be putting a student in.”

At this point, the moderator Nathan Bowles announced that since the event was going overtime and another group was waiting to use the room, the rest of the debate would be a “really chaotic” unmoderated ten-minute debate.

Discussion quickly turned to the topic of a possible fall reading break. Leuprecht and Holmes expressed support for its eventual creation, while Akuechbeny asked the incumbents why a fall reading week hasn’t been established yet despite the pledges of previous Senate candidates to create one.

Hamid responded by warning that rushing the creation of a fall reading break could lead to greater financial costs, classes starting earlier or later and the jeopardization of accreditation for programs such as engineering. Nonetheless, she also stated that “this is probably the closest we’ve ever come to having the reading break” and suggested one could be created soon.

Another oft-discussed topic was communication to students about what the Senate offers for them. Xiao praised the Senate’s publishing of their committee minutes, as well as their meeting summaries in The Ubyssey, but stressed that they need to do more.

“If you ask the average student, people outside, they’re like, ‘What is Senate?’ They don’t know what it is,” said Xiao. “I think we need to do a lot more to educate students what Senate does and how they can be involved to accurately represent them and kind of make more of an effort to go out of our way to discuss with issues that do matter to them.”

Holmes and Hamid also listed the Senate 2020 document — a public document which lays out the goals of student senators over the next few years — as a good way to communicate with students about what the Senate is aiming to achieve.

Malone added that, since outward communication is a governance matter, a governance review of the Senate would have large ramifications that could address transparency issues.