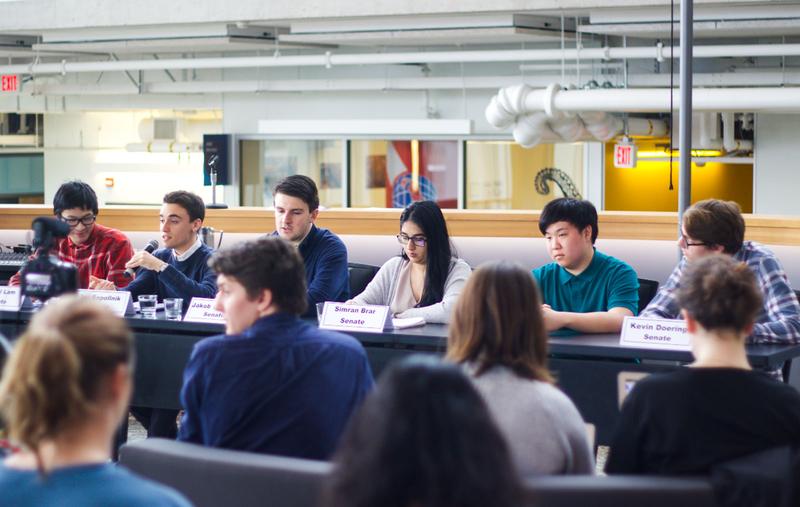 Opening statements from each of the candidates included repeated refrains of support for a fall reading break and for mental health initiatives.

Current student senators Lam and Sapollnik said that Senate has accomplished a lot in the past year — work which they would continue with the next group of faculty and alumni senators if re-elected. Sapollnik expressed that he wants to conduct a full scheduling review and chair the student Senate caucus.

Doering highlighted his strong understanding of university operations, and said that he wants Senate to adopt a student-focused agenda, while Brar noted her experience engaging with students and the importance of not expecting constituents to come to you as a student senator.

Doering: students are outnumbered on Senate, but that's why we need to work with others to get things done #AMSelections

Brar: expecting students to come to you is unrealistic, we need to go talk to them #AMSelections

In response to a question about UBC’s admissions process and the release of the broad-based admissions (BBA) rubric, candidates generally agreed that the inclusion of personal essay responses is a beneficial aspect of how UBC approaches admissions.

Gattinger said that getting into the faculty of engineering can be a “coin flip” between applicants with 95 per cent academic averages, therefore supplementary personal essays give applicants a chance to distinguish themselves.

Chen expressed doubt about the current effectiveness of the system, calling the nature of BBA  “dubious at best,” and suggesting greater consultations with high school counselors — especially from public schools — in order to improve the process.

Chen: the nature of broad-based admissions is dubious at best. the rubric needs to be released by UBC for transparency #AMSelections

In response to a comment about “cliche” issues in Senate proceedings, Brar noted that issues like mental health and fall reading week are brought up repeatedly because they are important to students and that the Senate works slowly.

Brar, in response: Senate works slowly & those "cliche" issues you mentioned are there again because it's slow and important #AMSelections

The second question posed asked candidates to address how they would ensure that student voices are heard during the development of new courses and curricula.

Gattinger said that senators need to approach constituencies and undergraduate societies versus the other way around, and that student consultation should be mandated due to the inclination for faculty to dismiss it as “irrelevant.”

In a discussion about academic dishonesty, candidates agreed that it is important to address the root causes of the issue.

Lam: Senate has come out with a mental health framework & and this could be discussed in a steering committee on mental health #AMSelections

Current student senator Kaidie Williams criticized the claim that Senate has not engaged with students beyond surveys as unfounded, citing meet and greet events as an example of further engagement. She then asked the candidates which two Senate committees they would most like to sit on.

Academic policy committee proved a popular choice and Sapollnik stressed the need to work together to ensure a student presence on each committee.

The candidates for Senate will be debating again on Friday during the Great Debate.

—With files from Moira Wyton