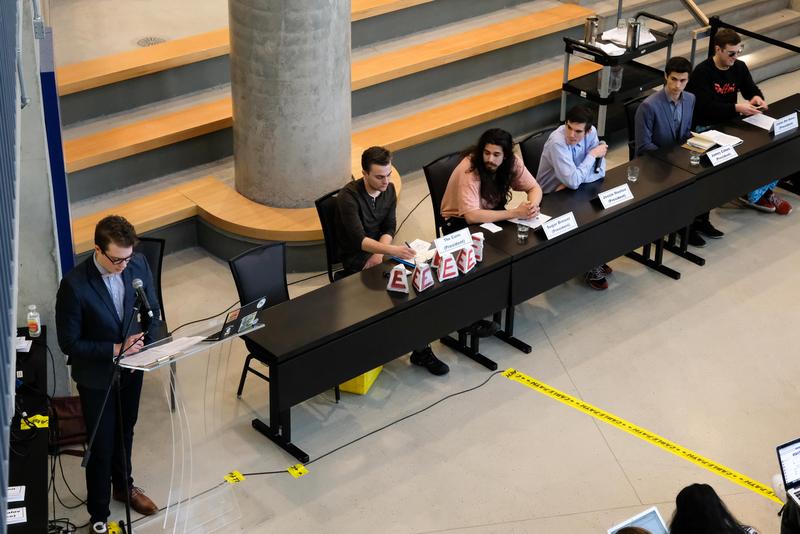 There are five candidates for president in this year’s AMS Elections — James Cohen, Sugar Brewer, Jesse Hooton, Julian Del Balso and “The Cairn.”

The first question posed to the candidates was what made them qualified to lead the AMS with such little directly related experience.

Brewer noted that he believed the role of the president is to “be the bridge between the AMS and the students,” and that he would draw upon his campus experience to do that. Hooton emphasized his status as an “outsider candidate” unlikely to conform with AMS norms, and said he, as a varsity athlete, has been involved in campus life in other ways. Cohen highlighted his experience running AMS club Party Well, and said that all his skills from that role are highly applicable. The Cairn’s representative — last year’s Engineering Undergraduate Society (EUS) President Alan Ehrenholz — stressed that it has been a fixture on campus for 50 years and has seen many different regimes, and feels ready to lead its own team.

The moderator, also The Ubyssey’s coordinating editor, then asked candidates why they have never or rarely attended AMS Council. Hooton said he hasn’t attended Council because he hasn’t been as passionate about student politics until recently. Cohen noted the value of Council and said he has attended the three most recent meetings, but hasn’t previously due to his busy schedule. Brewer said he, like many students, hasn’t attended because “we don’t know when they’re going on and what they’re going to be about.” By contrast, Ehrenholz responded that “as the champion of the Cairn in this election campaign,” he has attended AMS Council a lot — he was a councillor and has chaired three AMS committees.

(To clarify, the Ubyssey live-tweets every single meeting. Unclear whether they read that.)

The next question touched on the new draft of the sexual assault policy, which it was revealed Cohen and Hooton hadn’t read and Brewer could not comment on at the last debate.

This time, all candidates could comment. Ehrenholz noted that the draft looked well-thought out, but that the 60-day return time on the final report could be improved. Brewer and Hooton both criticized the wording of the draft — with Brewer saying the “technical jargon” made it difficult for someone without a legal background to understand and Hooton saying the “cumbersome and awkward wording” made the process hard to understand.

Brewer also noted that the fact that information concerning someone prosecuted for sexual harassment or assault need not be released unless it’s a matter of health and safety is problematic. He feels that this would allow UBC to withhold information to make themselves look better. He continued on to criticize that there is only brief mention of the lack of actual programs that are going to be in place to curb the normalization of sexual violence within the UBC community.

Hooton went on to point out that if you’re sexually assaulted by a faculty member, you have to report it to the head of that administrative unit, which might cause conflicts of interest or uncomfortableness for survivors.

Cohen’s response complimented the fact that the new draft was more survivor-focused in its process, but said that he does think that “the culture behind sexual assault is the first thing that has to be changed.” He noted that while there are some pretty great educational workshops, they need to be better engaged to have bigger turnouts.

Cohen also said that “counselling services from the perspective of the AMS need to be improved so there can be short wait times and more support.” Counselling is a UBC Service.

Del Balso went on to note that sexual misconduct is only defined at the end of the first section of the draft sexual assault policy. He said it might be more helpful to have the definitions at the beginning of the document.

The next question asked candidates how they felt the AMS could better incorporate Indigenous perspectives into its work. This was another question that was brought up in the last debate, but not properly discussed or answered.

Del Balso noted that he had spoken to his First Nations friend the day before the debate and they had come to the conclusion that this was an issue better solved at the provincial level.

Cohen once again focused on engagement.

“Something that I promise as president is to speak with all the different leaders of these communities,” he said.

Hooton said that he felt the best solution would be doing PR campaigns raising awareness of UBC’s history within and outside the student body.

He also recommended “reaching out to the Indigenous people on the different reserves in the local area to raise their consciousness of what UBC has to offer and the benefits of an education here at UBC.”

Brewer said UBC needs to do more to educate students on the “history of our land,” saying that there are not any courses on this currently (there are).

The Cairn gave a very general answer, saying that the AMS is one large team and going forward, they have to work together as a unit.

“We need to work to have the campus reflect what we want it to be.”

Candidates were then questioned on the AMS’s governance review.

Cohen emphasized the review’s recommendation that Council size be reduced as important. Ehrenholz, who was chair of the oversight committee which was abolished based on the review, noted that as an important change.

Hooton was unaware of the review and unable to comment. Brewer built off of this, saying that things like this review are not advocated to students on a “platform that engages students in a meaningful manner.”

The candidates were then asked what they have learned from past AMS presidents. Candidates generally praised Aaron Bailey, the AMS president last year, for his emphasis on sports, and current president Ava Nasiri for her engagement on campus. Cohen specifically noted that he had met with both Bailey and Nasiri a number of times, and they “have taken on somewhat of a mentorship role.”

Later in the debate, the moderator received a messaged from Nasiri and said that, “in the spirit of fairness, I need to mention that [Nasiri] has not taken on a mentorship role for James Cohen.”

Cohen noted that he had said “somewhat of a mentorship role.”

The moderator went on to specifically question Cohen about his comments saying last year’s Block Party ran a deficit because of poor management. Cohen said that negotiations should have been conducted differently, but acknowledged that he also knew more about the previous Block Party since he had worked for AMS Events during the organization of that one.

During the audience question period, Asad Ali, the AMS’s programming and events manager, asked Cohen what he had based his comments on Block Party on. Cohen said he had heard from various organizations — one of them being 200BPM, who have worked on campus organizing events — have informed him that there isn’t a strong emphasis on negotiation to get rates. Ali responded saying 200BPM isn’t related to AMS Events and that they haven’t done bigger events like Block Party.

The moderator also individually questioned Hooton on his advocation for more security cameras on campus during an interview with The Ubyssey. Hooton was asked how he planned to provide specific evidence, as required by section 26 of FIPPA, that the cameras are a necessity and that there is a reason to be collecting peoples identifiable information.

Hooton responded saying that while sexual assault is largely a cultural issue, cameras would make campus safer at certain times. When asked by the moderator to answer the specific question, he said that he would use the 47 sexual assaults that have been reported on campus in the last few years as reason to implement surveillance.

Hooton was also questioned about his response to a blog article in The Ubyssey that criticized his comment that if he was an alcoholic beverage, he would be “Peach Growers — I don’t want to sound too fruity, but I do enjoy that drink” for sounding homophobic. After seeing the article, Hooton posted and then deleted a Facebook post decrying “political correctness at UBC” and that “people need to stop being so sensitive.”

Hooton apologized for his comments, saying that “[he] has a lot to learn.”

“My last intention is to offend anybody. If there is anybody who is offended, I sincerely apologize,” he said.

The Cairn, following the provision of serious answers to debate questions despite being what appears to be a joke candidate, was asked by the moderator whether Ehrenholz was running as a serious candidate. Ehrenholz confirmed that he is and that if elected, he would take office.

“I would see no reason not to vote for the Cairn. I think the Cairn has a solid platform … and can lead a team for the AMS effectively,” said Ehrenholz.

The moderator then questioned Ehrenholz as to whether he felt that it would be fair for him to win the election despite not participating in the first debate. Ehrenholz responded, saying that “it’s every candidate’s right to choose which election events they take part in.”

During the audience question period, Ehrenholz was later questioned about whether he would be releasing his platform if he won in order to keep himself accountable to students. Ehrenholz said that if he is elected, he promises to publish a platform.

The moderator also individually questioned Brewer about his plans to lay the groundwork for a campus frosh. Brewer said that he pictured it as an event that all faculties would participate in and that students would find out exactly what resources are available on campus. Brewer also spoke to his plans to revitalize the AMS’s app as a communication and engagement platform for all students.

Given the primarily male selection of candidates in this year’s AMS Elections, candidates were also asked during the audience question period about how, as president, they would create a space not only for women, but all minorities to take on leadership roles on campus.

The Cairn noted that the first step is to make sure everyone feels they are on level playing field.

“That feeling that you have an equal opportunity to pursue your interests on this campus is the most important thing.”

He said this could be helped through an open-door policy and being on the ground with students, seeing how they could be supported.

Brewer emphasized the need for work on the healthier masculinities program in order to decrease sexism on campus. He also emphasized the creation of a sense of community.

Hooton emphasized that diversity is the sign of a thriving environment where students are comfortable and confident.

Cohen, like the Cairn, noted the importance of an open-door policy, and said the AMS had to be careful to make sure everyone’s voices are heard.

This recap does not cover every question covered in the debate due to its length. For detailed coverage, head over to the @UbysseyNews Twitter page.