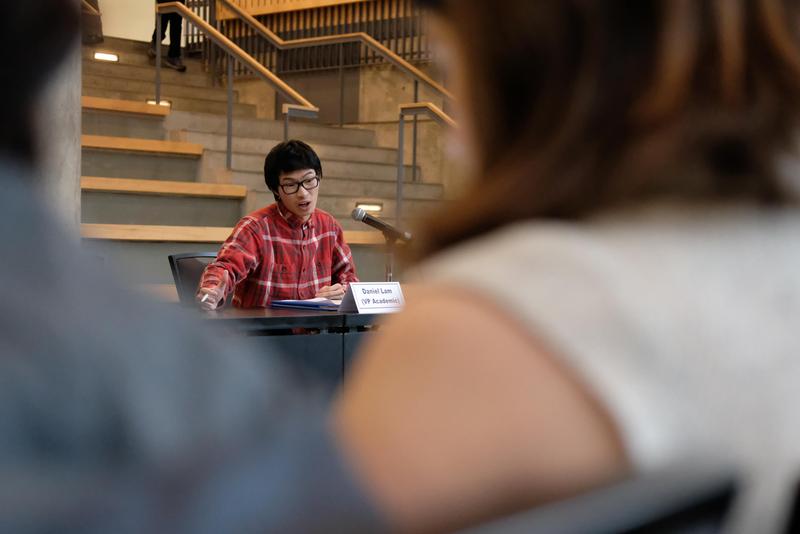 The Great Debate provided unopposed candidate Daniel Lam with the opportunity to further explain his platform points and solidify his plan for the next year as VP Academic.

A prominent theme in Lam’s answers during the debate was his intent to work closely with the constituencies on campus. When asked about how he would change the Academic Experience Survey for the coming year, he emphasized the importance of including the work of constituencies in this process. Lam also touched on working with constituencies in regards to course feedback.

Lam was also provided the opportunity to explain how he plans to increase the use of open educational resources on campus, and reiterated his two-step plan to find faculty allies to encourage the shift away from paper textbooks on campus. Lam also wants to lobby the provincial government for funding, noting that he would work closely with the VP External in these lobbying efforts.

Lam applauded the consultation done by the AMS in regards to the sexual assault policy as providing a “starting point to being an ally in helping us push for policy changes at the university.”

“Reading policy is boring for the general student population — if we don’t put out a guideline of what we want to guide students, it more difficult for them to formulate a response,” said Lam.

An audience member asked Lam how he plans to lobby for graduate students in this role. In response, he stated he would look at the allocation of the Excellence Fund and Diversity Fund to ensure that graduate students receive some of their benefits.