‘All you have to do is invite us’: AMS holds first Indigenous meet-and-greet with candidates 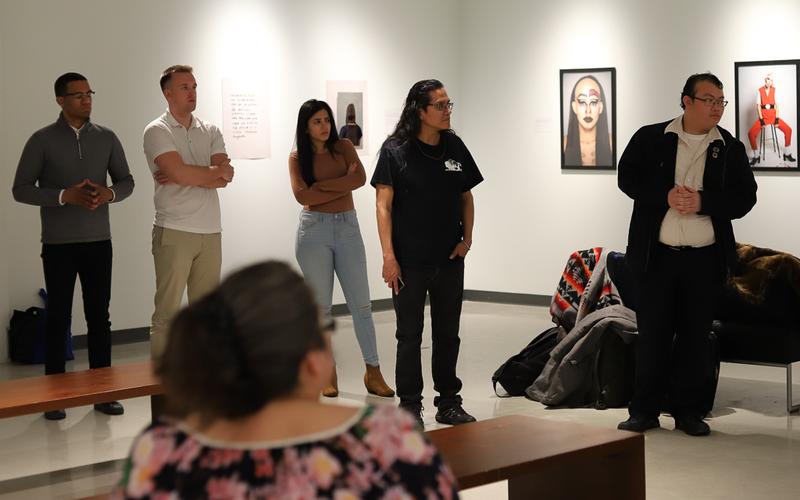 The AMS held their first-ever elections meet-and-greet for Indigenous students after community members raised concerns about speaking on Indigeneity without consulting them.

At the Hatch Art Gallery on March 11, Indigenous students directly asked candidates about Indigenous issues on campus. Around half of the candidates attended, with some citing previous commitments for their absence.

There are no Indigenous student running for office this year.

“I found that it was interesting that [candidates] were on settler lands and speaking on issues that they maybe don’t have any knowledge or experience of,” said AMS Elections’ Events and Logistics Officer Justice Tuccaro, a member of the Mikisew Cree First Nations of Fort Chipewyan, Alberta.

Rodney Little Mustache, a third-year mature student and member of the Piikani Nation of the Niitsitapi Confederacy, shared this concern. During his bid for AMS presidency last year and throughout his time at UBC, he has been vocal about Indigenous representation on campus.

“I wanted to emphasize how candidates would be held accountable to the issues they want to speak upon and deliver these campaign promises and platforms to the community,” Tuccaro said.

During the event, Little Mustache — alongside a few Indigenous students and community members — pressed the candidates in attendance on Indigenous issues, ranging from representation to curriculum to divestment.

Evans also believes Indigenous students would be the “main demographic” who would want to see Indigenous performers represented.

But his sentiments were quickly refuted by both an Indigenous Elder and another candidate.

“All you have to do is invite us,” a Haida Elder responded. “... [Y]ou guys can plan your events, that's not the problem, the problem is that you're not currently inviting us."

“... [I]t is equally important for the general university, for the settlers on campus, to see Indigenous voices on a big stage,” Board of Governors candidate Dylan Braam added.

One attendee asked how candidates plan to execute their Indigenous-related platform points more broadly. Candidates once again returned to claims of what had already been accomplished or suggestions of future consultation.

Board of Governors candidate Jeanie Malone mentioned her involvement with the Indigenous Strategic Plan, adding that she envisioned packing the docket with priorities and then working to accomplish the most requests possible at the Board level.

“I think that that's how we will see the most change in this university,” Malone said.

"We need to be able to make material steps, and not just [say we] care about Indigenous people but actually find a way to make it better for Indigenous people on campus,” said presidential candidate Spencer Latu.

The conversation took a turn when Tuccaro asked how candidates planned on having these conversations outside of the meet-and-greet. She added that if she and Little Mustache hadn’t put together the event, none of the candidates would have made a formal or explicit effort to engage with Indigenous students in their campaigns, despite using Indigenous issues as a major part of their platforms.

While many candidates cited consultation with the AMS Indigenous Committee, very few mentioned other Indigenous groups on campus.

VP Academic and Senate candidate Nick Pang said he had the opportunity to interact with Indigenous students as a campus tour guide. Latu said he had previously talked to Little Mustache and attended a First Nations Longhouse lunch.

“It's really horrible to put Indigenous issues in your platform when you don't even bother to just go for lunch,” Latu said. “It's a free lunch. I'm surprised there weren't more candidates there.”

Cristina Ilnitchi, who is running for re-election as VP external, said Indigenous partnerships have to be long-standing. She has previously been criticized for the lack of Indigenous inclusion in her lobbying trip to Ottawa, despite including advocacy on funding for Indigenous students.

"I want to ensure this conversation goes beyond my time, no matter what happens, and that [relationships] are already there for the next person who comes into the role,” she said.

“I'm very much not here to set the agenda for a community that has largely faced a history of other people doing that for them,” he said.

Little Mustache ended the question period with the topic of divestment. Every candidate present agreed that UBC should be pushing for divestment, with some candidates presenting ideas about how to make that happen.

"If I asked my best friend for an opinion of me, of course, they’re going to tell me I’m an amazing person,” Hakim said. “But when that's the only opinion that [I] rely on, [I’m] not going to get a proper opinion.”

The meet-and-greet ended with Little Mustache encouraging candidates to share their ideas more publicly. He also believes that AMS elections should make an Indigenous-specific meet-and-greet a permanent fixture in the future.

—with files from Riya Talitha