Last year, the AMS conducted a survey of UBC students as part of their long-awaited Governance Review. It garnered over 3,500 responses and highlighted a general lack of knowledge among UBC students about the AMS’s role in clubs, consultations and leadership.

Its responses were not made public, but The Ubyssey has obtained a copy of the full report and has reported on its contents. It is viewable in its entirety by registered UBC students in the AMS or Ubyssey offices.

Females made up 63 per cent of respondents, and males 35 per cent. Those in the “undefined” or “other” categories made up less than two per cent.

Eighty per cent of those who responded were undergraduate students, and the split between first to fourth-year undergraduates was around even — each year represented 20–29 per cent of responses.

Sixty-three respondents (two per cent) held AMS leadership positions at the time or had in the past.

Twenty-one per cent of respondents didn’t know that UBC students are automatically members of the AMS.

The main way respondents “interact” with the AMS was through their restaurants. Seventeen per cent of respondents were part of clubs, and 17 per cent had the Health and Dental plan. 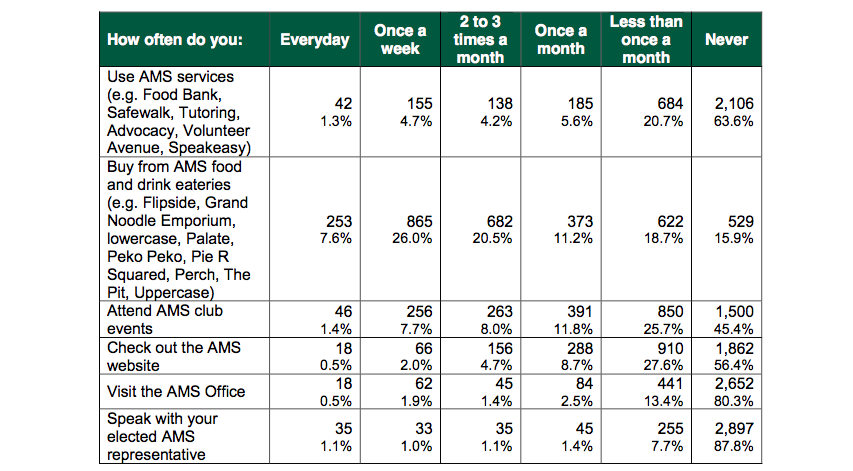 Sixty-four per cent of students said that they never use AMS services like the Food Bank, Tutoring or SafeWalk, but about half said that they purchase food from AMS outlets at least a few times per month.

Nearly 70 per cent of students were not interested in an AMS leadership position, and 74 per cent reported that if they did want to get involved, they wouldn’t know how to get involved.

“I think a lot of that has to do with elections. Even for people that run ... the concept of campaigning and how many different facets of the AMS that there are can act as barriers to the confidence a student might need to take that first step,” said AMS President Ava Nasiri in an interview with The Ubyssey regarding the survey results.

In a bid to make elections more accessible, Nasiri noted that the AMS will run info sessions and host more information on their website on how to run a campaign.

When asked to choose between student groups, respondents identified primarily through clubs and student societies. Just four per cent identified as part of the Greek system on campus.

One in five students believed that the AMS understands the needs of their student group, while 69 per cent said that they weren’t sure.

Nearly one in three students think that the AMS understands their needs as a student, but again, over half of respondents weren't sure. Respondents cited food prices, fees for services they don't use and a lack of communication as reasons they felt the AMS didn't understand their needs.

Just 19 per cent of students believed that executives and Council members represent the diversity of the UBC population.

“That really depends on the year and who decides to run, but the steps that we're taking in terms of [addressing] lack of knowledge should also be helpful in those terms,” said Nasiri.

The AMS is not responsible for tuition, but does lobby the university and provincial government for lower prices. Screenshot via MNP governance review

Of the 63 respondents who held elected leadership positions, 41 said that it was easy to meet the requirements of their roles. Common reasons respondents answered “no” were that they received no training, were not given enough information on their roles and/or that it was hard to get in touch with their constituency. 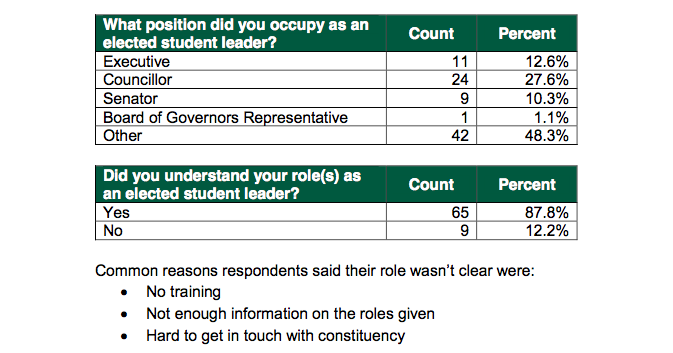 Sixty-three people said that they were elected student leaders, but 87 and 74 people responded to these two questions, respectively. Screenshot via MNP governance review

Just over half — 54 per cent — of respondents said they have been a part of a club or “constituency” on campus, and 17 per cent held leadership roles within them.

Students commonly cited ease of room bookings, quick communication and knowledgeability as benefits of working with the Student Administrative Commission (SAC), the group responsible for overseeing and liaising between clubs and the AMS. However, respondents were frustrated with the sluggishness and lost or misplaced forms as a result of the SAC’s paper-based system.

Respondents felt confident in the Finance Commission’s handling of club money, but also complained of slow processing times and communication.

Since the survey has been sent out, the contract system has been digitized and the reimbursement system is in the process of moving away from paper.

Just 17 per cent of students felt that they had been consulted sufficiently on policy issues, while again, the “don't know” option dominated responses at 68 per cent. Students who responded “no” cited tuition increases, lack of Council representation for certain constituencies and generally feeling like they haven’t been asked.

“I feel like that might be lack of knowledge on the differentiation between the university and the AMS,” said Nasiri, noting that the AMS “fought tooth and nail and blood and sweat and tears” to lobby the university against tuition increases.

About three quarters of students did not know who they would contact at the AMS about an important issue (Nasiri herself is a good place to start. Her email is president@ams.ubc.ca).

Seventy per cent of students agreed that the AMS apps are easy to access and use, but very few people actually use them.

Nasiri says she is committed to increasing awareness among students about what exactly the AMS is and does. In the short term, she plans to continue explanatory classroom announcements, take the Annual General Meeting (which is taking place this Monday, October 31) “a lot more seriously,” write a blog aimed at students through the university and make changes to the society’s monthly newsletter.

In the future, she plans to restructure how the AMS supports undergraduate societies.

“Right now until the end of 2016, we’re going to be doing consultations [with] all the departmental clubs and all of the undergraduate society executives to see what barriers they’re facing in terms of meaningfully engaging every single academic department on campus through their faculty,” she said.