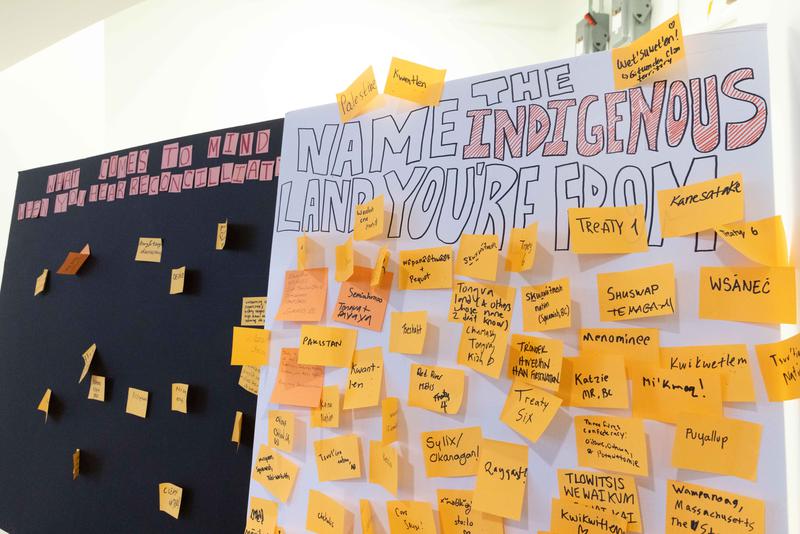 The AMS has set up boards on the second floor of the Nest asking students to respond to prompts related to Indigenous culture. Nathan Bawaan

After a year of event cancellations due to the pandemic, this October marks the first time the AMS is organizing what will hopefully become an annual Indigenous Culture Month.

According to the AMS website, Indigenous Culture Month is about celebrating Indigenous cultures and reflecting upon the work that still must be done around meaningful reconciliation.

The month-long event is Indigenous-student led by Alexandra Thomas, the AMS Indigenous engagement facilitator, and Rachelle Grabarcyzk, the AMS’s equity coordinator. The two students have been contracted to work specifically to organize Indigenous Culture Month and have been consulting with various Indigenous students across campus.

During the summer, Thomas had the idea of “creating Indigenous Culture Month just to set a tradition as something that happened every year.” This interest coincided with conversations she was having with her Indigenous peers about missing cultural events such as the UBC Longhouse’s annual powwow (which was cancelled because of the pandemic).

“All my Indigenous peers were kind of like, ‘Wow, we really would love events, we would really love something to connect our community and culture,’” she said.

Some of the programming for this month has included movie screenings, book giveaways, storytelling and dance performances and an Indigenous craft fair to support small local Indigenous student businesses.

Its last event will take place on Tuesday, October 26 at 5:30 p.m. in the form of a dancing performance by the Eagle Song Dancers.

National Indigenous History Month takes place during June, but the AMS decided to hold Indigenous Culture Month during October for both logistical and culturally-sensitive reasons.

AMS President Cole Evans pointed out that June is the start of the transitional period for the AMS so it is difficult to plan a large event during that time.

“It's very hard to plan for big events like [this] very early on in the quote unquote AMS year.”

Thomas also pointed out that many students are away from campus during the summer. Holding this event during October would enable them to reach a larger audience since most students will be on campus and first year students will be coming in as well.

Evans explained that part of this decision was also informed by National Day of Truth and Reconciliation.

“National Truth and Reconciliation Day is on September 30,” said Evans. “We thought that it'd be a good fit to have that holiday and then have some events happen around the same time of that holiday to complement each other and to keep the conversation going.”

Thomas also explained that they wanted to avoid overlap with other culturally significant months.

“We … have Black History Month [and] Pride Month and we want to give honour and attention to each of them equally,” she said.

Both Thomas and Evans expressed excitement about this event and its future iterations.

“This is the first time that the AMS has ever really done something like this,” said Evans. “Hopefully this will become an annual thing for the AMS.”

“I was hearing from a lot of Indigenous students that they missed events, just like the one we're holding,” said Thomas. “And I’m just excited to [plan them].”

This article has been corrected. A previous version said Alexandra Thomas was the first-ever AMS Indigenous Engagement Facilitator, when it was in fact Jennifer Cameron.

This article has been updated to say that Thomas worked with Rachelle Grabarcyzk, the AMS equity coordinator, to plan this month’s events.