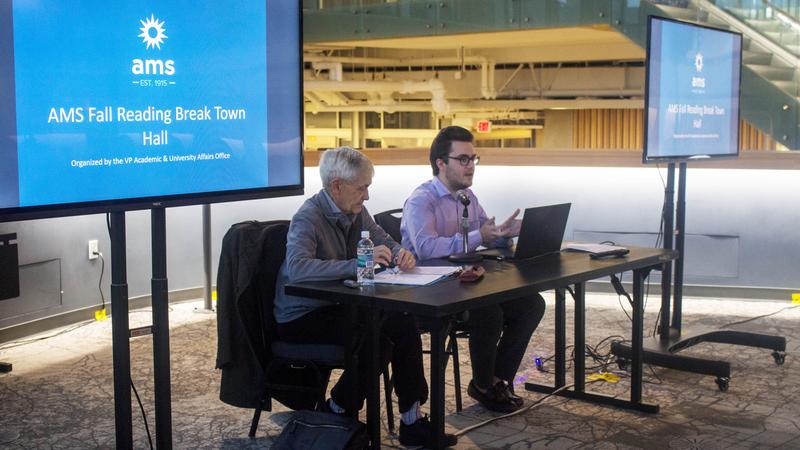 The AMS’s town hall on fall reading break reminded students that changing the academic calendar to create a break in the first term is complicated. But that doesn’t mean it’s impossible.

Hosted yesterday in the Nest, the event offered an opportunity for the AMS to explain the proposed changes required to accommodate a fall break and hear feedback from students.

“The only way that fall reading break is going to be possible is if we change some things in the schedule,” AMS VP Academic and University Affairs Max Holmes said to The Ubyssey, “and so that means there needs to be a conversation among students on … what we’re willing to give.”

The town hall began with a presentation on the possible changes and constraints by Holmes and Senate Academic Policy Committee Chair Dr. Paul Harrison.

Students and instructors are also generally not in favour of cutting teaching days, according to Holmes.

Starting the term early has its own problems. An early start would also require students to pay rent for August and might collide with orientation programs like Jump Start.

Instead, Holmes said main option would be to change the current exam schedule. This could mean reducing the days between the end of term and start of exams, reducing exam blocks to two-hour periods to fit five exams in each day or holding exams on Sundays.

But these options have their own constraints.

Reducing exams to two-hour periods could extend the possibility of students receiving exam hardships. Meanwhile, Sunday exams could be costly to UBC because the university has to open buildings that would have otherwise been closed.

In the Q&A period, some students raised concerns about whether the break would extend to all programs, especially for engineering and graduate students. Holmes said the AMS’s goal is still to create a break for all UBC students.

He also reaffirmed the possibility of a fall break for the next academic year — but reiterated it may start out as a four- or five-day long weekend instead of a full week.

“And then conversations about ‘how do we get the full week?’ will need to start after that because this is just a step in the direction ... towards getting a full fall reading break.”

Ultimately, while some information presented at the town hall is not new, Holmes said feedback from the event will help inform the final proposal to UBC’s Senate.

“This conversation has spanned a couple of years now and so what needs to happen is we need to be able to come up with a proposal now,” Holmes said to The Ubyssey.

“At this point, we need to be able to show that the Senate is able to get stuff done and is able to listen … to the needs of students, faculty and the wider university community.”