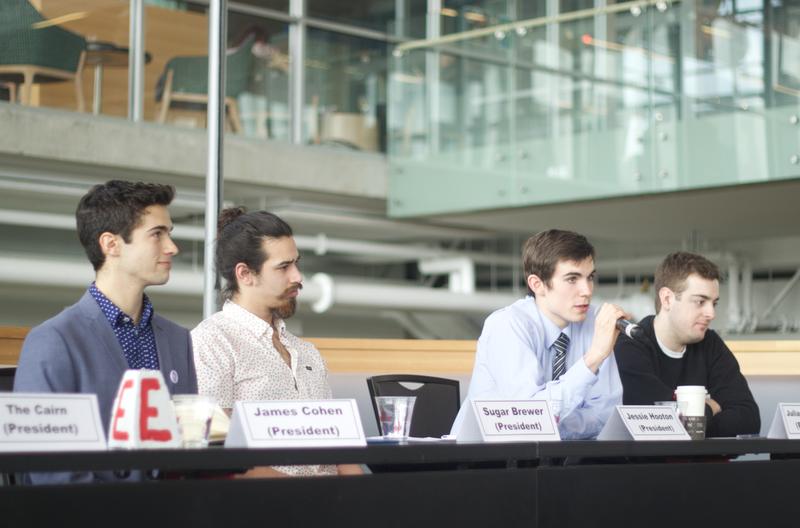 There are three people vying for the position of AMS President this year — Jesse Hooton, James Cohen and Sugar Brewer — and two joke candidates, Julian “The Hooligan” Del Balso and the Cairn.

The debate started off with each candidate presenting an opening statement. Cohen announced his mission to make UBC the happiest campus in North America, promising to unleash a “powerful package” of wellness initiatives to accomplish the goal. Brewer, who is running for the second year in a row, said his campaign focuses on creating a better channel of communication between the AMS and students. Hooton, a varsity athlete, is running from the perspective of students with constrained schedules, who he feels are offered restricted opportunities on campus due to their other commitments.

Del Balso didn’t say much, stating only that “a vote for me is a vote for the good stuff.”

Given the majority of the student body’s confusion as to exactly what the AMS is, the Debate Society, who moderated the debate, started off by asking candidates what they thought the AMS’s purpose is. All candidates focused on the idea of campus unity, with Hooton further emphasizing the need for school spirit.

Hooton also discussed the need for increased campus security, citing sexual assault and bike theft as major issues. Cohen jumped in and highlighted the importance of Safewalk, criticizing the fact that intoxicated students can’t use its services.

He also spoke to the need for career counselling outside currently available hours in order to make the service more available to students.

When asked about management styles, Cohen noted his experience being the president of Party Well and learning to manage and motivate people. Brewer emphasized the need for the president to be a neutral force, not controlling and to represent everyone’s opinions. Hooton said he would build on the past work of Aaron Bailey, who was president two years ago, in advancing the commitment to athletics initiatives.

After the general question period, the first audience question came from current VP External Kathleen Simpson, who expressed concern with the consistently used rhetoric during the debate that sexual assault only occurs walking home at night. She then asked how candidates planned to approach the sexual assault policy.

In response, Cohen acknowledged that Simpson was right in that sexual assault doesn’t just happen while you’re walking home, and said that perhaps training residence advisors and focusing on preventative measures would help. Citing a friends’ experience, he also emphasized the need for a wellness crew at every event on campus to “make people think twice” before sexually assaulting someone at an event.

Brewer said that he couldn’t pretend to have an answer, but noted that sexual assault is part of a deeper culture, especially on universities campuses.

“Too often, we try to put a band aid on it rather than fixing the issue,” he said.

Hooton agreed that UBC needs a campus culture change and that walking home at night isn’t the only time sexual assault happens, but he does believe people are more vulnerable at that time and that more security is needed on campus.

.@kathleene15 asked how candidates would approach sexual assault policy. No candidate mentioned the policy in their responses. #AMSFactCheck

Another community member questioned the candidates about how they would bring Indigenous issues to campus and increase the number of Indigenous students at UBC.

Cohen said that the AMS needs to take a look at Indigenous rights and issues and the possibility of mandatory coursework, while Hooton promoted some sort of advertising or PR campaign raising awareness of UBC’s history. Brewer noted that through focusing on international students, UBC can neglect the local indigenous populations — something he hopes to change.

Following this, The Ubyssey reiterated Simpson’s question about what changes, if any, are needed in the sexual assault policy draft.

Neither Cohen nor Hooton had ever read the policy, but said they would make it a priority. Brewer said he had read it that morning, but could not speak to exact points about what it is neglecting.

When asked about affordable education, it was noted as a consistent problem, with advocacy mentioned as an important solution. Hooton also emphasized the need for awareness of bursaries.

Candidates were also asked how many of them had been to an AMS Council meeting. Answers were generally negative.

Cohen — 2, Brewer — none, Hooton — none, anti-establishment, Del Balso — none, "but I feel like that's actually okay for me" #amselections

Block Party took up a significant amount of time during the debate, as candidates argued over cost, location and need over the course of several questions.

Cohen, in an ideal world, wants to bring Block Party back to what he notes as its former glory and make it a philanthropic event. Brewer criticized Block Party for looking good, but not actually meeting student needs. Hooton said that the AMS needs to look into new venues and make the event bigger so that more students can attend.

This year’s VP Finance then asked a critical question — how do the candidates plan to expand Block Party without running a $200,000 deficit like last year?

Cohen said that happened because of poor management, noting that expanding Block Party would be a calculated risk. Hooton said mobilizing volunteers would help mitigate costs.

Brewer, contrarily, noted that major projects aren’t his goal. Big projects, in his view, are often promised and not accomplished. He wants to focus on improving multiple small things.

In their closing statements, candidates emphasized their main platform points.

Cohen noted that it was a shame no one was able to speak to the sexual assault policy, and that the AMS needs to use the “bright minds” at its disposal to improve social media and thereby awareness. He also noted an “unacceptable” wait for counselling services and the need for unity on campus.

Brewer noted the tremendous strides made by the AMS, but the need for mobilized students to not go ignored.

“If you want a shake-up, I’m your candidate,” he said.

Hooton once again emphasized the need for flexible career counselling, increased campus security and the illumination of dark areas on campus. He also highlighted the importance of Safewalk and deterring bike theft.

Del Balso said that 8 a.m. classes suck, we need more sunny days, that he would build a slide from the Nest to the fountain and that we need a fall reading break, among other things.

The Cairn remained silent throughout the entire debate.