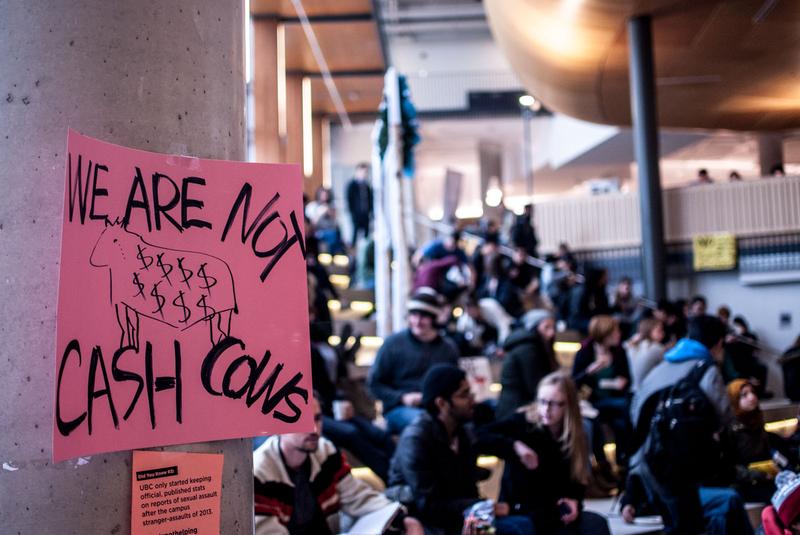 Afford UBC, the AMS opposition campaign against the tuition increases, hosted a rally of 500 people in the Nest on Monday. Photo Boris Bosnjakovic / The Ubyssey

On Monday the AMS organized a rally to protest the current proposed increases to international student tuition. Roughly 500 people were in attendance.

Held in the Agora of the Nest, the rally featured several speakers and the opportunity for students to write letters detailing why they oppose the tuition hikes to Interim President Martha Piper as part of the AMS’s “Mail for Martha” campaign.

According to Afford UBC — the AMS’s opposition campaign against the increases — they collected 43 handwritten letters and 300 signatures on pre-written letters at the rally. These were combined with the 500-plus letters collected previously and delivered to the Board of Governors meeting which took place yesterday.

Most of the concerns voiced by students appear to relate to UBC’s status as an institution with a diverse student body at a lower price point. “One of the things that drew me [to UBC] was its international and multicultural population and [that] its tuition was accessible as well,” said first-year Arts student Giselle Hidalgo.

Third-year applied science student Jamiu Abdsalami shares these concerns. “Obviously [the increases are] going to reduce the diversity we get at UBC and I don’t think that’s something the university is considering to a full extent,” he told The Ubyssey.

Bailey’s speech emphasized the major holes he sees in the university’s proposal for the tuition increases, stating that the administration has “failed to justify this increase in any meaningful way to the point that one would be fair to ask if they even know themselves why such an increase is necessary.”

Rosenfeld focused on the engagement seen during this tuition consultation. “Students have an unfair reputation at UBC for being apolitical,” said Rosenfeld in his speech at the rally. “But I think the truth is, while we may not all be activists, we know what we care about and we’re willing to stand up for those things — which your presence here demonstrates.”

Overall, Rosenfeld was pleased with the engagement seen at the rally. “I was thrilled to see hundreds of students turn out to write letters and learn about the unjustified tuition increases being proposed by the university,” he said in an email statement to The Ubyssey. “I hope the Board of Governors takes this as an indication of how students feel and decide not to approve the increases at their December meeting.”